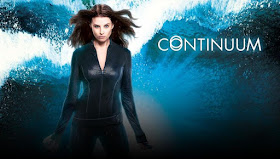 Travis is in prison and Carlos is talking to him – well mocking him about how Liber8 has failed to improve the world. Travis doesn’t see it that way – he rightly points out that they’ve exposed a lot of badness and caused change – even Kiera now agrees with Liber8.

But Liber8 vs Corporations is so several seasons ago and Kiera wants Carlos to hand Travis to her custody. They’ve got super-soldiers from the future running amok so they need their own super soldiers to combat them – Travis fits the bill. Carlos isn’t a fan of this, especially since Kiera is keeping him in the dark and putting all her faith in Brad, her inside man who is doing very little

Even Travis agrees with Carlos on that.

Brad is dealing with the fact not all the super soldiers have accepted him back into the fold, though Marcellus still seems to trust him

At team Geek, Lucas and Julian are both poking Alec’s “breakup angst” and excellently keep Alec from getting above himself as seems to be Julian’s raison d’etre these days. They do have an interesting debate on how, while Kellogg beat Alec, he also saved Alec from his terrible future as corporate overlord while Julian is worried that he’s still detsined to be super-bad guy, which then Lucas objects to because, as a member of Liber8, he sees Julian as the founder of a heroic resistance movement.

See, this is why Continuum has so vastly improved from its early days. We have complexity and nuance and simple pronouncements of “good vs bad” just go all shaky because there’s so many sides and view points and just about everyone is at least a little right in some cases and at last a little wrong.

Lucas is a little in awe seeing Julian write a historic manifesto that will one day inspire him so much – and then horrified when Julian burns it. Julian is trying to erase his own legacy.

Except Lucas finds the whole Theseus manifesto online. Julian is not happy and decides to track this person down, finding a woman who is quite happy to see him – she published his manifesto because Curtis told her to. Because things aren’t complicated enough. Nope, let’s make it more complex – the woman is Mrs. Kagame, the mother of Edward Kagame, head of Liber8. Curtis tries to get him to talk out his legacy – his revolution and how he loses, while at the same time telling him to have courage and don’t assume that the future written. He adds that Julian has a responsibility to lead the movement so it isn’t abused by fanatics. Julian doesn’t seem convinced.

One of the future soldiers takes down Kellogg’s security detail so she can introduce herself as his new bodyguard who Kiera gets to meet when he is dragged in to the police station (with his minion Dylon) to be accused of kidnapping. Dylon is there to help Kellogg through the whole process because he’s always been terrible. Kellogg reminds everyone that he’s basically bought this department and they need his money.

After he’s left Alec goes to them, he wants to change his future and take over Betty’s role in the police department. He’s hired on the spot because (as we’ve seen with Kiera) this police department needs no paperwork, no background checks, no training, nothing. First job is the theft of superconductors probably initiated by the Future Soldiers. Kiera steps in in seconds to ask him to give all the information before Carlos because of her ridiculous trust for Brad.

Probably because said Brad is driving the getaway car. So poor Alec is lying to Carlos on his first day. Bonus, Carlos wants Alec to track Kiera’s CMR and creepily stalk her. Yay for trusting relationships. Alec agrees to spy on her – but not to pass on the info to Carlos unless it’s necessary.

This all gets messier when Alec finds the warehouse where the super soldiers probably are and Kiera wants him to come and not tell Carlos. Also, she’s working with Gaza. They decide something is being made in the warehouse and it’s time to go spying. And they get Gaza her own super-suit (albeit lesser to Kiera’s since she doesn’t have a CMR).

They go in, but the invisibility on the suits keeps failing – because the future soldiers have seen Kiera use it twice now and have used their future tech to counter it. They still decide to infiltrate, discover the Future Soldiers are making Something and deciding that this is a bad thing and they need to destroy it right now.

Gaza also wants a super suit. I want Gaza to have a super suit. Gaza in a super suit would be awesome. Gaza’s method of destroying it is to blow up the whole building which Kiera objects to because death while Gaza would quite like Kiera to either get with the war already. Alec also takes the chance, yet again, to tell her what a fool she is to trust Brad.

Alec suddenly decides that they shouldn’t blow up the device because it appears to be futuristic, super and have lots of power (perhaps to send Kiera home) and he’d quite like them to have a clue what they’re doing before they blow everything up. Pshah, Gaza’s not putting up with this silly lack of explosions and accuses Kiera of risking everything for Brad (not exactly an unfair accusation). Their arguing gets them caught so we have a fight scene with a super-duper-future soldier. Gaza still wants to set off the bomb but Alec has sensibly put a knock-out-switch in Gaza’s suit.

Big escape scene for Kiera and Gaza against future tech that can shut down all their guns and suits. Of course, Gaza is a wrecking ball. But they run into Marcellus and Lucas shoots him to save Kiera… and Brad shoots Lucas.

As they leave, Gaza epically calls out Kiera for risking all their lives for Brad who has now killed Lucas and how her desire to go home is something ONLY SHE WANTS and the rest of them fought to change that shitty future – including Lucas who has now died for it. Gaza pulls a gun on Kiera and makes her pull over so she can leave

Back at the warehouse, Marcellus is dead and guy-who-hates Brad tries to take over. Except Brad is the one who has the rank – Brad supports Soren because of the mission and to convince everyone that he’s on their side honest.

At the police station Alec and Kiera continue to lie to Carlos and stop the police raiding the site. Alec isn’t pleased with her trust in Brad or her willingness to let Kellogg do whatever just because they have a power source which may send her home.

Kiera goes to the gaol to tell Travis about Lucas’s death. He tells her that they were all soldiers for a cause, they knew what they risked. She has a big conflict about what to do, to help everyone while not sacrificing herself. Travis has an awesome speech against Kellogg which Kiera agrees with and Carlos spies on.

Julian and Alec also have a powerful moment on Lucas’s death “guys like him shouldn’t die because of guys like us”. Julian wants to leave – but Alec has read his manifesto and calls it beautiful – he points out that if Julian doesn’t have the evil corporate overlord Alec to fight against then he may not become the terrorist leader. Julian returns to Mrs. Kagame

Kiera drops in for another of her confrontations with Kellogg, asking if he can really trust himself.

Travis’s gaol-cell speech is so very right. Liber8 have actually succeeded in some ways: both Alex and Kiera (the architect of the dystopian corporate future and a loyal cog in that corporate future) have rejected their previous philosophies and are now if not allied with Liber8, at least sharing several ideas in common.

Take that, though, and throw in Julian’s utter rejection of his own legacy which will inspire Liber8 in the first place. But if Liber8’s goals have already been reached, do they need Julian’s inspiration to fight against a dystopia which now may not happen? Between him and Alec there’s a lot of nice considerations of their legacy which matters a lot since, in the early seasons, these two were the iconic world changing figures of the future world. Julian’s legacy in particular is fascinating with Curtis both telling him he loses but also that that’s not set in stone – while at the same time he has the spectre of either being the architect of vast destruction or washing his hands of it and letting other people, possible fanatics, run with his words. And if that happens is it not still his legacy?

Yes, I’m going to gush about nuance and complexity on this show again. Except I do think Curtis is just one step too far

Kiera and Carlos just makes me scream while at the same time being kind of understandable. They’ve both got several seasons of history together and then suddenly Kiera has this whole separate agenda and starts freezing Carlos out because her feelings for Brad have completely skewed her common sense (or, more charitably, her faith in Brad is not something she can explain but she still trusts him) while Carlos has had several seasons of being blindsided by surprises from Kiera, has out a lot on the line for her and is now duly afraid of her deciding to handle this potential disaster with no back up and only the info she deigns to share (while she still uses him as a resource). It’s a breaking down relationship – but it works, especially since I think they’ve managed to avoid making it a romance break up.

Can we actually get the Future Soldier’s agenda here? I mean, presumably it’s to stop their terrible dystopian future… so can we analyse that?

I hate the death of Lucas because he was a Black man who was involved in the plot (though this show is quite racially diverse, certainly compared to most what we see) and very much an aversion of so many stereotypes – nerdy, bookish, geeky, intelligent, computer genius, inventor; these are not common roles that Black people get to play on TV and, in many ways, makes losing him more of a blow than, say, losing Travis. Now they need to treat his death as important and not just drama for Bad and Kiera’s relationship.

At the same time Kiera’s own conflict remains interesting – at what level are you required to sacrifice your own life, your own dreams for other people?