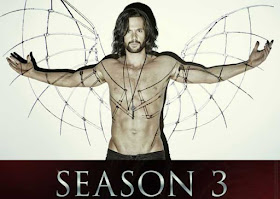 Various city states are messing with history pledging various forces to the Pope’s crusade when a guy in full Turkish armour manages to barge into the chamber where it is all being debated – once he gets there he takes off his helmet and reveals he’s Lorenzo.

Ok, so he escaped the Turks dressed as one. Great, good plan. Then upon leaving Otranto he decided to continue to travel nearly the FULL length of Italy in (presumably very smelly) the same suit of armour?! Even when arriving in Florence, his own city, not only did he KEEP wearing the armour but he didn’t even take the helmet off so people could see him and NOT try to murder him

It would quite literally have been safer for him to walk into the city stark bollock naked. Or dressed in angry honey badgers.

Leo has cured Riario, apparently. And now frees him – which shows that even a genius can be a bloody fool. They’re joined by Laura of Venice (who seems to be a fool as well, returning to the man who held her at sword point). She decides to be quite casual about the whole thing an calmly lets them know Lorenzo is back

Leo runs to him (he’s still wearing the world’s smelliest armour). He finally takes it off (after explaining he wore it for a while since he didn’t know how far the Ottomans have reached – an excuse that makes sense unless you know anything about Italian geography and realise how damn far Otranto and Florence are from each other). He describes the horrible conditions he endured and Leo tries to reassure him about the army they gathered by Lorenzo is more concerned about Clarice and how she was killed.

Riario and Laura still apparently have a thing for each other. He, Leo and Laura join the Pope and others in a war Council to discuss the Ottoman invasion. They plan a united invasion which goes a little awry because Lorenzo declares, literally, that the Pope and his crusade can go fuck themselves. Telling Pope’s to go fuck themselves should probably happen much more often but generally raises many many eyebrows. But the new Lord, Madam Singh, is quick to back him.

Other councillors do not and the man starts well, pointing out that Florence is a Republic so Lorenzo can’t actually overrule them, but then mocks him with Clarice sleeping with Carlo. Lorenzo decides a reasonable rebuttal is to beat the man to death on the Council floor. As an argument it lacks elegance but is certainly impactful. He then rages that Florence will be independent from everyone – Rome, Ottomans, the rest of Italy – anything and everything. Even Nico and Vanessa look shocked.

Leo takes Laura to a brothel (this show has almost as many brothel scenes as Game of Thrones). Really what’s with all these brothels where every activity is part of the floor show? They’re there to see Lorenzo who is busy being whipped by a sex worker. This is apparently his kinky kinky way of grieving

Nico wants to flee the city given how far gone Lorenzo has gone – but Vanessa won’t leave because she won’t leave her child behind.

Laura is outraged that Lorenzo won’t help them bring down the Turks to which Lorenzo shows off the scars he’s received at the hands of Papal assassins. Lorenzo is hitting all the best counter arguments this episode. Their allies have been his enemies for far longer. He also intends to keep Leo’s weapons to defend Florence, not as part of the crusade – confiscating all of his devices and plans.

This leaves Leo moping in his workshop and even praising Zoroaster’s insight – Leo despairs more and more that they have absolutely no chance against the Ottoman Empire, even with his weapons. He gives his money to Zoroaster and encourages him to run for the hills. Zoroaster says no – and he has a new idea: they go to Wallachia to go see Vlad since he is a) super powerful and immortal and b) he has been holding off the Ottomans for years and c) they have the ability to travel the length of Europe in a day or two

Leo does have copies of the plans which he gives to Riario. Leo goes with just Zoroaster and Nico.

Instead she takes dinner with Lorenzo and tries to speak up on behalf of Nico, and on behalf of Clarice and defending her decision to support the crusade (which he doesn’t considered needing forgiving).

Laura and Riario are facing their crusade falling apart – without Florence both Sienna and Venice have pulled out. She also forgives Riario his little attempt at murdering her and she kisses him.  Laura and Riario go to Rome while Laura laughingly warn Vanessa about tyranny – because the Pope isn’t a tyrant? Do we remember the Pope murdering people in his over-sized bath?

Lucrezia is being held by her father (I have no idea what this guy’s name is but this is the real Pope) because he and his Sons of Mithras want her to tell him where the Page from the Leafy Book is because it can do terribad things – she gave it to one of the girls Lupo captured and she’ now running to Florence. Given this show’s experience of geography, that should take her about 3 hours.

They call in their seer (Leo’s mother? I don’t even know any more) who magically learns the page is going to Rome… which isn’t true, since it’s going to Leo in Florence.

They’re both locked up on the ship and Lucrezia wants to know why the seer life since she knows the Seer can read her mind. It turns out the Seer is Sofia’s (the girl heading to Florence) mother – which makes Sofia Leo’s sister.

Leo’s little road trip plans means his mother the seer gets a vision – she decides she must sent Lucrezia to warn him – via vision of course. Are really visions the best thing to send a man who hallucinates so often? Of course Leo greets her with lots of kisses. She tells him about Sofia

Which means he has to then tell Zoroaster he’s going somewhere else because of dreams – he’s off to Vinci. So Zoroaster and Nico will go to see Vlad and Leonardo will go to Vinci. The Seer then tells Sofia to go to Vinci as well. And then is stabbed by Gedik

She was a woman who was actually doing something. This show does not tolerate these shenanigans.

Sad music plays. I’m supposed to be sad? Really? I’m calling this woman the seer because I have no idea what her name is. All I know is she’s the source of eternal mummy issues. I’ve watched In the Flesh Starz, you need to step it up if you want to pluck my heart strings – ganking glorified extras isn’t going to cut it.

So Riario and Laura are now, inevitably, a thing. Because this is so important (along with all the brothel scenes). And we still have Leo and Lucrezia. Look at all this gratuitous heterosexuality.

I would have said that the whole Dracula storyline was the most ridiculous on the show and definitely the one we least need to revisit. But then the whole South American adventure happened.

I kind of have to almost laugh at how Leo wakes up and says “hey I’m going to do this because visions” and no-one even questions it.

And if we’re going to go the Crusade route why not go back to history? Screw the Italian city states and Venice (which did not take part), call on Aragon and Hungary which did – and have far bigger reasons to get involved anyway (the Aragonese throne and Napolese throne are part of the same dynasty and Hungary is worried about the Ottomans on their border).