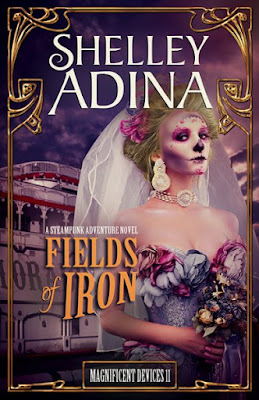 Gloria’s plans to stop the Californias invading the Texican territories and likely massacring thousands of people – including several innocents in between the two territories, looks to have been scuppered when she narrowly avoided being kidnapped by the California’s ambassador

She can see only one way to stop the war – to appeal to the Viceroy himself. But to even get to the man involves crossing a territory where no woman travels alone – and with her speaking not a word of Spanish. It seems only a marriage of convenience will allow her to make her plea for peace.

I have to say yet again how much I love Gloria Merriwhether-Astor for being one of the most selfless, kind yet non-matyred characters. It has to be stressed that Gloria has no personal stake in the events of this book

Gloria is an extremely wealthy woman. She if the heir to a massive munitions manufactory which is making an absolute fortune selling arms for a brewing war. Gloria has everything to gain from this war going ahead and everything to lose by stopping that war

But she’s a deeply moral person and she absolutely refuses to accept this war going ahead. Considering her father directly responsible for this war and the upcoming massacre of a vast number of people including several innocent tribes – like the Brujas we saw last book and the Navapai who are caught in the middle. Gloria is not only determined to stop this war and cost herself a whole lot of money but she is willing to endure a lot of hardship to make this happen. She has been kidnapped, faced a lot of set packs and physical discomfort and, finally, in this book actually opts to marry a man she doesn’t love or even know very well because it’s the only way she can navigate the incredibly misogynist society of the Californios.

Gloria is a protagonist acting entirely from altruistic motives. And entirely against her own self-interest. And entirely to her own detriment. Yet she isn’t a protagonist who is being dragged into this by fat or destiny or special Chosen One status. Nor does she spend any real time bemoaning her fate or what is happening. She spends some time debating whether she really wants to take a certain step – but it’s only really about which step she takes, not about whether she should keep going forward. No matter how much she sacrifices, she is completely lacking in angst because these are actions she actively chooses; she’s not acting badly done to. She is an active participant here and the choices she makes are her own active decisions

Part of this may stem from her slightly shaky low self worth. Again this is interestingly well done – we have a lot of protagonists in the genre who will sit in a corner and dramatically declare how hideously ugly/awful/terrible they are. Gloria isn’t like that, she merely fails to acknowledge how extraordinary she is: partly because of her extremely terrible father but also because she has been surrounded by the awesome protagonists of this series which she persists in comparing herself too

Gloria is capable, driven, slightly self-depreciating, intelligent, determined, selfless and one of the most unabashedly moral characters in the series and a worthy inheritor of the protagonist status following in the footsteps of so many female characters

And it’s fitting that he is pretty much sole protagonist in this book. We have other important and clearly determined female characters with Alice making another appearance, as well as the interestingly separatist Brujas (who have also been developed to show a level of racial diversity even though none of them are especially major characters) as well as also showing some very shrewed and cunning Californio women. In particular I like one daughter of a high ranking noble who is brilliantly and ruthlessly ambitious and not shy about it. I like this because it has already been established that the Californio culture is extremely misogynist and women are sheltered at best and victimised at worst – yet we still see these women in this culture are capable of drive and determination which many books miss. While also showing treats that, when appearing in women, are nearly always evidence of evil or villainy: ambition and selfishness. I like that she is respected for these and not demonised especially since this book also has the shining pedestal that is Gloria the Selfless.

Another element I really appreciated is the man who has always mooned after Gloria, loves her dearly and makes many puppy-dog eyes and she… doesn’t love him. Nope, for once we have the desperate hero taking desperate measures to desperately win the affection of his Beloved and her being very clear that that’s nice and all but she doesn’t actually love him. Sorry, but no and nor is he entitled to her love because of the epic feats of epicness he has performed in her name. I like that a lot.

The plot is an interesting exploration. It isn’t full of action or fast pacing and doesn’t need to be: this isn’t a swashbuckling book of previous stories. This is a book of introduction and explorations. We are within the Californias, the colony of the Royal Kingdom of Spain with its own radically different traditions cultures and religion and one we need to explore as Gloria enters a battle not of airships and electric rifles, but of politics and manoeuvring. It’s a very different story

It ends in a cliff-hanger which I’m never a fan of, but it’s not a will-she-die-or-not but more a cliff-hanger over what choices she will make: and is infinitely more interesting because of that.

I’ve mentioned the diversity – we have some minor POC among the Brujahs – as well as Latinos there are Asian characters which was unexpected but not a huge presence in the country. This is also one of the vaguer aspects of the Californios, descriptions make it difficult to define between Latinos and Spanish – and given the lack of independence and the ongoing Spanish Empire, I’m not entirely sure the definitions are even entirely contextually possible to define (to a degree that, honestly, as a European makes me generally thinking I am too far out of my depth to define the complexities of the Hispanic Language group vs the Latino ethnic group and the difference between Spanish empire and ex-empire independent Spanish speaking countries and how much latino ethnicity is influenced by Latin American context, culture and Native identities and how any of that fits in a Steampunk Victoriana setting of Spanish controlled California – so am just going to leave that there).

We do have hints that one of the women around Gloria is attracted to her. It’s not entirely subtle in any means, to a degree where any reader should probably feel “gods Gloria can you be this clueless” while, at the same time, not ever really being overtly labelled as such.

It’s another excellent chapter in this ongoing epic adventure of this series. I love this world and the story of these excellent women and the saga will never end. No. It will not. The Fanchickens demand it.