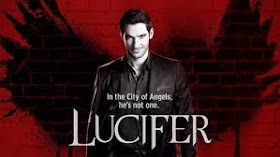 This is all expositioned extra clearly by Linda his excellent therapist. Ok, normally when a show or book manages to find a way to Tell everything, especially character development, so expressly it’s usually convoluted or doesn’t make any sense at all or is generally made because the author seems to think their audience are so terrible lacking in intelligence that everything needs spelling out

But Linda is excellent, she helps grow Lucifer not by just expressly pointing out his growth and feelings but prodding him every step of the way. And I love her all the more now she has both learned the truth about Lucifer and managed to at least partially got past that. There’s one excellent scene that covers this with Linda meeting Charlotte. She’s both in awe that Charlotte is the ex-wife of god (and respectful of Charlotte’s excellent rebuttal that she isn’t defined by her marriage) while also ferociously refusing to share any information about Lucifer with her. Respectful, even in awe, but still very aware of her professional ethics. Linda is awesome

Actually I’d love to see a series all following Linda, the therapist to the supernatural.

Anyway, this realisation of how vital Los Angeles and the sense of home is to Lucifer – the first place he has ever felt at home – he also faces a threat to that. This week’s murder victim was Lucifer’s corrupt landlord and his son is now selling Lux, Lucifer’s home, out from under him. And he buyer is a gloriously awful wealth real estate mogul who is just wrecking everything to spite her enemies. I kind of love her, I always have a soft spot for people who are gloriously awful and revel in it – I call them Magnificent Bastards and I kind of love them for it.

While the murder investigation goes on, Lucifer tries to scrabble up some way to save his home – with parties blocking the place from eviction (because of course he does) often not focusing on the case because of it. And here we see the wonderful relationship between Chloe and Lucifer – even as he endlessly frustrates her and his inability to follow the rules clearly exasperates her to no ends – she still deeply cares about Lucifer and his plight. Not enough to do more than to provide some legal distraction during Lucifer’s fight because she’s still Chloe and the law matters to her – but still there to offer real support. She knows how much Lux means to Lucifer which in turn makes it important to her. I think moments like this show the connection (not necessarily romantic) between characters more than anything else – forget kissing, sex and dramatic proclamations of love: simply making someone’s priorities your priorities is the most powerful depiction I can think of.

Unfortunately Charlotte is also in on the game. I’m all kinds of torn about Chaerlotte. In and of herself, I kind of love her, because she is the utterly perfect Magnificent Bastard. Charlotte is the Honey badger, she wanders through life Not Giving a Shit. And I think for this character to be awesome we either need a major storyline to focus on her (which I don’t think we have the space for here because we’re focusing on Lucifer and Chloe) or give her no real goal and just have her wander around causing chaos and being generally hilarious – let’s have a season of establishing her as this utterly powerful, confused, lost, sociopathic character finding her feet and dropping the occasional body and snarling and Mazikeen (hey we could make far more room for Mazikeen then – a character who really really really needs more attention. Or more room for Amandiel which makes him more than moving through Charlotte’s orbit. Hey couldn’t we have a 3 part story of Lucifer, Amandiel and Charlotte all adapting to the human world separately. Oh the storyline we could have).

Anyway, Charlotte wants to get Lucifer duly on side helping them go back to Heaven. Mazikeen is suspicious of her and despite his original objections, Amandiel joins her in some stalking of her

And Charlotte is definitely plotting. She realises how upset Lucifer is about losing Lux so plans, through lawyering and murder, to bomb the night club full of people – sadly her bomber has a shred of conscience. Though I do wonder how much this amorality is going to drive Amandiel off. Plan B comes when she makes the same realisation we do:

Lucifer loves Chloe. She promptly seduces Dan (and they’re kind of fun together – her brutal honesty is cruel and fun) to both have fun… and learn more information. It also puts Amandiel and Mazikeen off the plot because Amandiel draws the line at stalking his mother when she’s making out with a guy.

Charlotte now has another plan – blowing up Chloe. Chloe he manages an awesome scene of saving Lux for Lucifer by having it declared a heritage spot, leaving Lucifer moved and confused, lost at the idea of someone doing him a favour – and doing it without any expectation of reward for this. This is so far from the way Lucifer operates that the whole thing bemuses him

But before she does that we have the crime of the week un-resolved because 2 people are identified as potential suspects. And they both confess to protect the other. With this example of pure, stupid, love alongside the generous favour Chloe just did for Lucifer allows Linda to prod Lucifer into realising his quest for a home wasn’t about Los Angeles or about Lux or even about people – in general – but that it’s about Chloe. His love for Chloe

This revelation…. Makes Lucifer stand Chloe up, staying home while she waits in a restaurant. And I can see this – not much shakes the very foundation of reality for an immortal archangel. This is complete re-evaluate your entire reality level thinking: and he’s run away from it. And isn’t this Lucifer’s modus operandi that we’ve seen for the last 2 seasons? The whole reason why he is going to Linda for therapy in the first place is because of how utterly avoidant he is about everything – he completely runs from, ignores or denies any uncomfortable truth. Linda’s awesome work as a therapist is less to analyse him and more to grab the truth about him and make him actually confront it.

Unfortunately this leaves Chloe alone – for Charlotte to target.