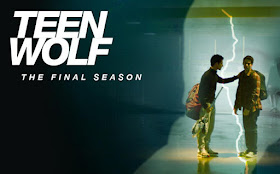 Melissa joins Chris Argent hunting in the middle of the night. And it’s a silly idea. It’s silly because she’s not a hunter, has no experience in this kind of thing and really can only be a liability without some more experience

And the show knows it’s silly. Openly acknowledges it – but neither the objective writing nor Chris belittle for this – while at the same time we’re nicely reminded of her medical skills to affirm that she DOES contribute to the group. But may be more involved this season – which can also be a good thing

Also Melissa and Chris are definitely on the way to a romance.

Less importantly, they find more bodies – and Malia. She didn’t cause the bodies but she is definitely continuing to have control issues. Something Chris decides to work on – and interestingly not linking it to her werecoyoteness; but to bloodlust. A bloodlust he remembers so well from his sister Kate who became such an utter monster: this is a nice twist because one of my many many many many loathings of the Argents for so long, including Alison, was how they bought into the idea of werewolves as monsters so completely. Nice call back Teen Wolf.

He recruits her to help defend the whole gang of teenagers who saw the Wild Hunt last episode and are now slated to vanish as well because of that. With Mason getting the idea that the Wild Hunt travels by lightning, during the next storm they gather nearly all the survivors in the Argent bunker, underground and warded, to be safe.

Sadly it’s almost all because some people won’t listen – including Gwen who is a POC in Teen Wolf and should really know better than to risk vanishing so much. Leaving Malia and Chris to guard the annoying teens (preferably without shooting them or tasing them, Malia), Scott and the B Team go to save the others who aren’t in the bunker

And end up playing Lacrosse. Because Teen Wolf

Except Mason who seems to be becoming the new ideas guy (which I like because it means he actually has a role and has now managed to be present in 4 episodes in a row which is a damn record!) and figures out that maybe the Wild Hunt fled and didn’t take Gwen last time because of Parrish – after all, when he confronted the Wild Hunt last time they ran away. Time to recruit the Hellhound

In the depressingly fireproof underwear. Awwww.

They have a plan! They have a strategy! They’re brave and all their eyes glow and they growl and roar and fight

Thanks to one fool teen, the hunt gets in the bunker, taking everyone and leaving Chris in the hospital

Despite fighting in the rain on the Lacrosse field, the gang can’t stop the hunt taking the people they tried to save, including Gwen (who wants to be taken – so she can be with her sister). Even Parrish becomes all fiery – but is extinguished with a shot from the hunt. He doesn’t vanish but his flames are doused and he is forced back to human form.

It’s an all out loss, which Baby Wolf Liam takes as a personal mopey failure while Scott does a much better job of owning responsibility as a noble leader who just had a terrible set back.

It’s not a happy joy episode

And it gets more grievous. Focusing on the little clues disappeared kids have left behind, Lydia realises each vanished person leaves a relic. To try and get Stiles back they need to find his relic – among all the Banshee visions and Claudia’s hostility. Admittedly Lydia is trying to peel away her ugly wallpaper, but she’s still suspicious and hostile and definitely Not Good

Whatever she said must have been convincing because they both go to Melissa to ask for a totally illegal look at Claudia’s medical record which, alas, reveals no evidence of pregnancy. No signs Stiles was ever born. Though they do find the disease that killed her – only she has now miraculously survived

With no evidence Stiles ever existed, everyone starts to give up finding him… even though his jeep, his relic, is still around, unbeknownst to them

Yup this episode aimed for the low point – but this is what Teen Wolf does. Starts sad so we can have epic triumph later.