Killjoys, Season 3, Episode 4: The Lion, the Witch and the Wardrobe 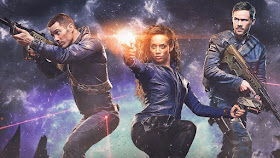 The nerds are still battling around the remnant that Klyne left, sniping back and forth. Zeph and Johnny will never get on and Zeph will never learn appropriate boundaries around D’avin.


But there’s a celebration - Johnny has been raised of level 5 RAC agent which means a party at Pree’s and a ritual beating of Johnny, apparently it’s a thing.


Of course, there’s a bit of bitter-sweetness to this as becoming a level 5 would be nicer when the RAC isn’t controlled by evil goo-monsters, right? Also Turin drops that Johnny would have got his 5 long ago but Dutch blocked it… oookay? Tension.


We also foreshadow Dutch’s need for an army to take down the Hullen. Wouldn’t it be great if one were happily provided by this episode.


So, Filk, a Killjoy, shows up and tries to arrest Johnny for killing Delle Sayah - which he kind of tried to do, but failed because he didn’t go for the head. Anyway, Dutch isn’t having this and we have a fight which ends up with Pree getting Johnny and Dutch out while D’avin hangs around to do some investigating


D’avin has some fun tormenting people, checking Pree’s CCTV and eventually proving that Delle Sayah survived Johnny shooting her. He also experiments with Zeph and the Hullen go to zone in on Delle Sayah and see what she sees - Aneela. Which is spooky and scary especially since Aneela realises he’s there and casually banishes him. Delle Sayah continues to tread a tight rope of being trusted and close by a woman who is… at best… unpredictable and violent.


Pree has an idea to save Johnny - have him join the notorious mercenary group called the Ferram. Basically these guys are super awesome and super notorious. They’re also made up of soldiers who deserted because they refused to fight in unjust wars: not for corporate greed or feudal power but for actual justice. Sounds like the army Dutch needs. Johnny is all geeky about them
And when Pree arrives (with new hair) he is greeted by their leader, Lachlann, with a passionate kiss and a laser blast.


Ok, first of all: AT LAST. After 3 seasons of hints and tropes but not overtly actual stating Pree is gay (yes, I know he’s a walking stereotype. Stereotype is NOT representation) we finally have confirmation. Yes, here we have Pree kissing another man, confirming they have a relationship - a passionate, overwhelming relationship - beyond any doubt. ABOUT DAMN TIME!


He’s going to use that leverage to get Johnny shelter with them because he cares about Johnny enough to risk his life to come here. To which Johnny responds with, basically, no homo.


Really, Johnny. Pree just risked his life to save yours - and your first concern is making it clear that you’re not gay?


Ok, Pree’s complicated past with the Farran comes down to this: he was a leader of them and in a big relationship with Lachlann but the he decided to bail on them, breaking Lachlann’s heart and betraying them


Which means, by their rules, Pree has to die. But they’ll protect Johnny. Pree knew this and took Johnny here anyway


Time for some krypton factor challenges where Johnny doesn’t just lay down and let Dutch win - largely because he feels she’s being dismissive of him.


This all comes to a head on the third test when they’re both dosed with truth gas and a lot comes out.


Johnny is tired of the box Dutch puts him in. The innocent she first found, the fun, gentle one. The one she assumes can’t fight that well. The one she was so sure couldn’t possible have murdered Dell Sayah. The fact Dutch thinks he’s become a murderer because of her while completely denying he is his own person with his own choices. While at the same time kind of making him her conscience so she doesn’t have to develop her own. A quote


“Who I am is nothing to do with you. I am not your angel on your shoulder, it’s not my job to stop you going full Klyne and killing everyone in your way”


I think this is important - especially considering the possessive jealousy we’ve seen from Dutch towards Johnny. Johnny is his own person, who is he is not her fault, similarly it’s not his job to fulfill a role in her own consciousness and sense of self


I just wish that, well, every single best friend in the genre (especially minority best friends) would have exactly the same call out speech


He also pushes further, accusing Dutch of going for the Hullen out of revenge and daddy issues… which Dutch doesn’t deny. He also says he doesn’t think they can win.


They’re then gassed and kidnapped again - this time by Filk again, he killjoy. With them captured they have time to make up again, acknowledging each other’s bratishness. And we have a confirmation that, yes, while Johnny has issues with Dutch and doesn’t think they can win, he’s also super confident that if ANYONE can achieve this victory, it is Dutch. He also doesn’t think he’s changed - but he doesn’t need her to protect him


Meanwhile Pree has it out with Lachlann, they fight and Pree has some words on why he left: Lachlann was born to lead the Farran, but never would while Pree led (yes he was the leader). Also Lachlann was risking his life for Pree too much which Pree couldn’t stand - add on that the Farran would always be Lachlan’s priority and Pree left.


And Pree thanks them for saving his life?


C’mon, Killjoys ultimately Pree saved himself - and was only at risk because he was saving them.
He also says he’s not playing house with Lachlan and is coming home with them… ok I’m going to need Pree to make his relationship with sexy bar man a reality. And I want it to be present. I love that Pree’s sexuality has finally, belatedly, been confirmed- but I will be super pissed if it only get mentioned because his ex was useful to Dutch. I want to see an ongoing acknowledgement and presence of his sexuality (like sexy bar man who was just dumped in now - when he really could have been around any time in the last 3 seasons).


D’avin confirms to everyone that Delle Sayah is Hullen


Dutch plans to free her RACs as her next target


Zeph figures out how to open the Remnant… but then closes it. It seems like she’s been able to do this for a while...