The Mist, Season One, Episode Five: The Waiting Room 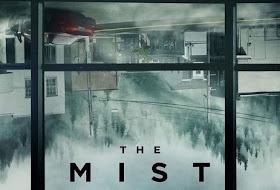 We are now officially half way through the season and at this point, I think the writers have absolutely given up on the series.  I cannot for the life of me see the point of The Mist.  The rules constantly shift to allow the ensemble cast to do things that others cannot and then we have the whole hey fog has landed on the town, everyone panic before we know for certain that anything is really wrong.

Kevin and his entourage make it to the hospital because Bryan has been shot in the leg.  The minute they arrive, they are asked if the military has been called in or any other outside forces to deal with the mist. Yes, just like everyone else, the people in the hospital are in full on panic mode.  We don't even really know why. Bryan is taken for treatment and as they wait to find out whether or not he is going to survive, Mia takes the time to blame this all on Kevin.  It seems that she believes they wouldn't be in this position if Kevin had just shot Clay in the first place.  Kevin however feels that they aren't at the place yet and has not accepted this brave new world they are supposedly all living in.  His denial makes more sense than Mia's let's just kill everything because really, they've all run through the mist and been just fine.

Even though the last Kevin heard from his family they were hiding out at the mall, he decides to do a little tour of the hospital showing pictures of his family to see if they are there. This is when Kevin comes across his older brother who just conveniently happens to be there.  When the Mist rolled in, Mike was working outdoors when he was set upon by a group of teens, who just so happened to know things about Mike they shouldn't have.  This experience makes Mike doubt his senses.  Mike is dying and will probably die of an infection because the doctor is unable to get to the surgical ward because some of the mist has made its way inside of the hospital.  The best that Mike can hope for at this time is to put out of his misery but Kevin absolutely refuses to euthanize his brother.

Kevin's big deal is that he is driven to save people and this is why he isn't willing to give up on his brother.  And how does Kevin's saviour narrative express itself? Why through a flashback of course. We go back to Kevin and Eve setting up house to learn the source of the animosity between Kevin and Mike.  Proving that the writers can be cliche as fuck, it's Eve who comes between them. We first learned that Eve had slept with a lot of men in town when she was accused of being a slut by her daughter.  Mike also makes such aspersions when he snarks about his surprise that Eve settled down with Kevin, making Eve upset.

Eve and Kevin have some honeymoon sex, with Eve encouraging Kevin to go harder and faster, shocking Kevin.  This of course leads to the revelation about Eve's past and about part of her still being that girl. Eve then reveals exactly what Mike meant by his less than cryptic comments, spurring Kevin to promise to kick his brother's ass.  Eve however chose Kevin because he's not the alpha male violent bad boy she's been attracted to in the past and has reached a stage where she no longer wants to be saved.

In the present, the Doctor makes it clear that he's unwilling to travel through the mist to save Mike which surprises Kevin because he's run through shorter distances and lived through the mist. Dear Kevin, not everyone has your damn plot armor.  Kevin decides to run through the mist and take his brother to a surgical ward to remove the metal pole at the direction of the doctor.  In a last moment of closeness, Mike admits that the reason he was so nasty about Eve is because he was in love with her and so was everyone else who talked shit about her. Apparently, Mike and all the other men in town were simply jealous that Kevin is the one who ended up with Eve.

I'm about done with the slut shaming of Eve and the idea that she was redeemed by marriage.  I'm completely irritated by the idea that only a slut would want to engage in more vigorous sex. Is Eve just supposed to lie on her back and think of England? The portrayal of Eve's sex life is absolutely sexist. You'll note that no male characters have had to justify their sexual history or had their morality questioned because of their sexual history. The Mist then doubles down by justifying slut shaming because of jealousy and love. No, it's not okay to slut shame someone.  The Mist isn't winning any awards when it comes to gender but then the source material was also deeply misogynistic.

After Kevin does what can be best described as a Mash surgery, he rushes Mike through the hall, only to slip on a pool of blood and send Mike careening forward on his own.  Mike ends up falling off the gurney and is promptly attacked by Mist leeches falling from the ceiling.  Kevin rushes to his brother and tries to help but Mike is quickly overwhelmed by the leeches.  Realising that his end is here, Mike tells Kevin to leave him behind because Kevin needs to be there for Eve and Alex.  Realising that the only way to play hero is to honour his brother's request, Kevin shoots Mike.

Adrian's hospital stay isn't exactly peachy.  There's precious little representation for LGBT people in this genre, so one cannot help but get hopeful when one pops up, especially if there are no LGBT characters in the source material.  The Waiting Room however proves that perhaps no exclusion is better than one filled with homophobia.  Adrian sees one of the jocks from school who raced to get help for his sick mother at the hospital when the mist descended.

Obviously, jock dude is feeling a little vulnerable and alone.  Adrian meets up with jock dude in the bathroom and this comes complete with a scene at the urinal. Adrian approaches jock dude slowly at the sink and kisses him, only to be beaten savagely while being called an anti-gay slur. Why was this even necessary? When Adrian explains his bruises to Eve as having sex, she tells him that he needs a safe word. Adrian is the only gay character on The Mist and thus far the only defining thing about his character is the homophobia that he is subjected to.  He's not a person, so much as he is an identity to be oppressed and attacked. This entire thing is made worse because of course Jock dude is gay. My fellow straight people, it's time to stop blaming gay bashing on gay people.  It's deeply homophobic and not at all truthful.

Mia spends her brief time with Bryan.  They share a moment with Bryan stroking her face and Mia being forced to admit that she's just not ready for this.  I really like that Mia felt confidant enough to be able to draw a line in the sand.  After her little chat with Adrian, Mia heads back to meet with Bryan and is directed to another room by a nurse.  It turns out that this Bryan doesn't recognise her.  Hmmm? Which Bryan is the real Bryan? Mia reacts but not only running out of the hospital, but stealing the keys which Kevin had entrusted to Adrian and taking off. This is clearly meant to have us (read: The viewers) thinking about the role of the military in what is going on.

We are halfway through the first season and to celebrate, The Mist chose to give us an episode filled with misogyny, slut shaming, a gay bashing and homophobia. It's clear that even with the source material, The Mist is just plain nonsense at this point. Everyone is freaking out and waiting for the end to come. There are no established rules because it seems that anyone with plot armor can just take a stroll in the mist for no identifiable reason. We already had way too many characters and for some reason, the writers decided we need more. Kevin conveniently meeting up with Mike, so that we could be informed that he isn't Alex's biological father and to give us a backstory which at best seems disconnected and is an absolute waste of time.  Is this why they had to throw in some slut shaming of Eve?

I've watching five hours of The Mist so far and I officially want back every damn minute.