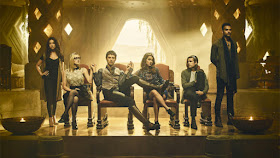 Alice and Julia have decided to go through with the plan to transfer magic from Julia to Alice - and Alice is almost painfully excited. They’re going to use a repurposed hedge witch spell that originally was used to steal magic.

They start  - and are interrupted by Penny who attracts their attention by possessing a singing fish.


This is not the most dignified way to communicate.

He warns them that he’s seen this before - and it killed the witches in question. But it’s also Fogg’s spell - yes Dean Henry Fogg.

He’s not doing so well - and he’s not exactly happy they’ve been keeping Julia’s magic from him but, as they point out, he’s been very drunk all the time. He doesn’t deny this or make excuses - because he’s a magicless magician, a Dean without a school, and an unemployed blind black man in an even more prejudiced America (it turns out they were using magic to “increase tolerance 38% which Henry is already scathing about and clearly unimpressed by how little tolerance that actually amounted to). In other words, Henry has plenty of reasons to be drunk.

He does tell them about the spell - and that they need the flesh of a magical creature. Specifically an incubus. Which means they go to an incubus to ask to use his penis

And I was all ready to roll my eyes because this is freaking Magicians but at least someone on the writer team decided that they’d used up their quota of forced sexual situations for the next 11 centuries and backed off. Turns out that the Incubus isn’t into sex, feeds on stress, and is happy to lend them his regrowing tail.

They cast the spell and I am waiting for everything to go wrong - because this is Magicians after all.. And it… doesn’t? This is oddly restrained for Magicians. It appears Julia successfully transfers her magic to Alice who is overjoyed, completely gleeful and, more importantly, hopeful. Julia, obviously, didn’t really embrace her magic or what it meant or what it could do - but Alice? She’s there, enchanting Henry’s glasses and making plans and determined to make things better.

That includes when Penny says goodbye. Watching his friends risk and live their lives is too painful when he feels so utterly forgotten within it. Hymen suggests he find someone else to haunt - because haunting people you know just reminds you you’re no longer part of their story.

He says goodbye to Julia and she appeals for him to stay. He cuts her off because they’ve never been close, never really been friends and he’s not really patient with her pretence of caring. He also is clear she has no plan to restore his body despite her protestations - in fact she just gave away her magic. She has no plan, she has no idea what to do with the future.

She doesn’t - she lashes back that she just wants 5 minutes to think, not to be plagued by ghosts or gods or anything further - and she leaves, leaving Penny to Alice

Ok this is a definite, layered, see both sides issue. I mean after what Julia has been through? I can see her wanting a break, it is reasonable for her to want a break, to focus on herself

At the same time, it’s reasonable for Penny, utterly isolated, watching his former companions without being able to intervene and often forgotten by them, reduced to communicating through a fish that sings “I will survive”. Having Julia mouth platitudes she doesn’t mean is not helpful

Alice, on the other hand, listens more but, as the hopeful one, also offers a solution. She wants to rebuild him a body

Which sounds perfect… except mid spell she collapses, seizing and foaming and all Penny can do is use his fish to sing.

And I agree with that because there isn’t a magic wand you can wave and make trauma go away. That’s not how trauma works - so it’s good we don’t have it vanish. But to see her give away her power, give away her special shiny ability in search of just a bit of peace and still not get that. Because without her magic, without future plans, all Julia is is suffering. This is her storyline, this is her existence. And she needs more.

Alice collapsing is pretty much par the course for Magicians, nothing goes well. And I kind of love Henry’s descent to Don’tgiveafucksville. And acknowledging that if this sucks for all magicians, him, a disabled Black man, has extra troubles.

In Fillory the Stone Mother resorts to locking Margot in a dungeon with her terrible son to try and get Margot to consummate their marriage. Margot is Not Having This (Margot: you need a pile of socks and sex education). She decides to the appropriate way to get Fomar to back off is to educate him about sex. As the US does. So lots of horror stories. She doesn’t break out the horrible pictures of STDs but does try to convince him vaginas are terrifying - specifically that they have teeth.

Elliot has come back to Fillory to help Margot and continue the quest. Quentin has joined them and they definitely make references to “life partners” - albeit in the context of saying that Quentin needs to find another life partner for his next quest. Because he’s going off searching for the next key alone while Elliot focuses on Margot. Which I agree with partially because Margot needs help, but also I’m cursing Elliot and Quentin being kept apart when they are carefully hinting at a relationship.

The Fairy Queen demands that Elliot have Margot and Fomar have sex and he’s clear that this totally won’t happen - Margot cannot be forced. Instead he suggests a honeymoon out of the palace.

The true motive for this is that prince Ess (released from prison after Margot realised he wasn’t the one trying to kill her fiance) sent him a message that the fae are up to something north of Fillory.

Of course they have Fomar - who Quentin drugs (Margot: Either you drugged his wine or I killed him with my rage.) Margot and Elliot also lament that they’ve turned from sarcastic comic relief amusing bit parts to characters of depth and layers. Which is perfectly true and I laughed out loud to have them openly lampshade this and wonder how they can get back to their shallow, snarky selves again. I applaud, well played Magicians.

What Es has revealed is that the fae have radically changed the atmosphere of the northern Orchards, cutting down the trees and replacing them with mushrooms, changing the atmosphere to make it hot and wet. They note that the fae are big on humidity, always bathing and spritzing. They realise they’re terraforming Fillory, trying to change the atmosphere to make it more comfortable for the Fae. And when Margot pulls a mushroom she sees there’s a fae foetus attached. Yes, the mushrooms are fae eggs… I… did not expect this

Elliot realises this is a full on fae invasion and colonisation of Fillory and wonders what to do next. Margot doesn’t do this - she grabs a double arm load of baby fae for hostages and heads back to the carriage. Because Margot is a doer and doesn’t waste time wondering

They also have Fomar get up close with a fanged frog to convince him they had sex. Including bite marks. Because Fomar is out of his league here.

Back to Quentin - he needs to sail to a part of Fillory that is constantly dark and he is loving it. He’s on a quest, of course he’s happy. Without Elliot he’s accompanied by Benedict the map maker as they go looking for the next key. Instead they find Poppy, a woman stranded on a raft. They rescue her - she’s a Brakebills student (she knows Josh. Everyone knows Josh), full of joy and light hearted, a dragon expert who was out studying dragons in Fillory before being stranded for a long time (and not understanding why magic suddenly stopped). She also has the key which she took from a dragon - and she’s happy to give it to Quentin.

Well, that was easy.

They drink for a night, and when Quentin wakes up in the morning there’s a spectral clone of him telling him what a bad person he is. Poppy explains, in a disturbingly light hearted fashion, the magical property of this key: it creates a spectral version of the last person to touch the key made up of all your darkness which then basically emotionally destroys you as a person until you commit suicide. Most of her previous crew were killed by the key. She suggests if Quentin can’t handle it he handle it on to someone else (which Quentin absolutely won’t do). And that Quentin can totally take it because he’s emotionally stable… which he totally isn’t.

The spectre starts shallow but grows ever more savage until Quentin is driven to the edge of the boat, ready to jump in. Only Benedict intervening saves him - revealing that he also struggled with suicide and never resolved those issues (instead being forced to suppress his emotions by his parents - basically a cruel lesson from all too many emotionally damaged people). Quentin insists Benedict ties him to the mast, Ulysses style, so he doesn’t jump in without risking someone else with the key.

He keeps talking to Poppy and reveals the keys often show key holes which you can then use to travel somewhere else: she takes the key (with a glove) and tries to use it to escape. Quentin, tied up, can’t follow - but Benedict can. He does manage to retrieve the key if not stop Poppy and come back to Quentin

But now this highly vulnerable man who has already spoken of his suicidal thoughts is holding the key. Quentin tries to speak to him - but Benedict jumps over the edge of the boat. And is eaten by a dragon. As is the key. This does not make the quest any easier.

Poppy does return and is still irritatingly positive. She does release Quentin and accept he has good reason to be annoyed with her. But her dragon lore is useful - apparently dragons don’t shit. They not only guard portals, but they are portals. In other words, things they can’t digest are teleported.

To the Underworld. This quest does not get easier.

I was waiting for all kinds of awful because this show is terrible when it comes to consent issues and sex issues. But this whole season seems to have looked back on the previous two seasons and said “shit, we need to do better.” Like the incubus? Contrast this storyline with the storyline which forced Alice to drink a cup of semen. Or Margot tormenting the little brat she marriage - contrast that with Margot and Ess or Elliot and Fenn. Forced marriage and consent are staples of Magicians. And after a season of forcing Elliot into a relationship with a woman with a disgusting amount of homophobia it looks like we’re actually going to see a tender and real relationship between him and Quentin -just the way he touches Quentin speaks volumes

Magicians… what happened? Because I’m actually eagerly looking forward to each episode now. It’s like the show grew up! It’s not perfect, I want more for Julia, I want more involvement for Penny. I want Quentin and Penny to spend more than 2 minutes together (come on, show us this relationship! The straight people will survive more than 2 minutes of gayness! I promise!)

Part of me worries that I’ve been trained to expect so much awful from Magicians that simply not reaching those expectations is making me see it as more praiseworthy than it is.

And, of course, shout out to geek queen Felicia Day.