Stalking the Others (H&W Investigations #4) by Jess Haines 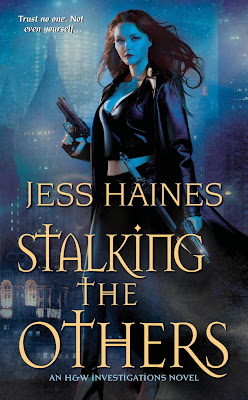 Shiarra has a mission – to find the werewolf who infected her and kill him. And maybe her cheating ex-boyfriend Chaz, leader of the Sunstrikers as well. And who knows how many other Sunstrikers if she has the chance

With the police hunting her and having fled Royce’s protection in favour of more direct hunting, Shiarra decides to align herself with the White Hats once again; the fanatical anti-Other hunters will probably kill her if she changes. But until then she can work with them to hunt down Chaz – who has gone to ground leaving almost no trace or trail.

Shiarra, all alone – having fled Royce and fighting against her boyfriend and the entire Sunstriker pack – where oh where can Shiarra turn?

Why to her friendly neighbourhood hate group of course!

No! I’ve said it before and I will say it again – if the White Hats are some vicious, violent hate group that seeks to kill all the Others regardless of whether they deserve it or not then they are not the people who should be on your rolodex under “people to ask for favours.” She has done this time and again, all the time emphasising their utter hatred of all things Other and how much they hate her contacts with them. It’s ridiculous when you consider how a few mean words about her link with a vampire from a werewolf were sufficient to send Shiarra into tears in the last book, but violent murdering hate groups? Yup, she’s fine with this.  Why would they be more welcoming after she ran out on them the last time?

Add in to this is that Shiarra thinks she is turning into a werewolf. Last book she was making all kinds of preparations for this – but now she goes to the White Hats who discuss whether to kill her now and get it over with? She even lurches into an off-again-on-again possible wish for suicide to try and justify it – but it’s never maintained. She mentions that the White Hats will be able to do what has to be done when the time comes – a clear indication she expects them to kill her, but at no point does she express that being dead would be better than being a werewolf and it goes against how she acted in the last book seeking help and guidance with how to be a werewolf.

This gets more annoying when she has to kill an Other and gets ten kinds of angst out of it. That wasn’t part of the plan! Noooo! Well, you’re working with a hate group that wants to slaughter all of the Others and you are surprised that this comes with death? I’d support her angst and grief over killing someone if it weren’t for her being utterly incapable to follow the very obvious consequences to her decisions.

There’s also Shiarra’s ongoing loathing of all things Royce when, of all the people she has to deal with, Royce is the most reasonable, caring, accepting and helpful of anyone she has dealt with – and has proven this many times. Her blaming of Royce for even the most convoluted things became an almost running joke – I expected her to start cursing Royce every time she stubbed a toe or someone drank the last of the milk. Shiarra must go through life constantly shaking her fist at the sky screaming “daaaamn you Royce!!!”

Ironically, the one thing that Royce can be blamed for – his behaviour in the first book – has been rather consigned to history. The whole forced contract and threat that went with it seems to be banished to the mists of memory.

This is all incredibly frustrating to read. Which makes it an immense relief when we reach towards the end of the book and Shiarra’s behaviour is somewhat explained – the influence on her makes her seem a little less unreasonable. But it’s only somewhat explained – there’s a lot that still doesn’t quite gel for me, especially in terms of trusting the White Hats and even explained it doesn’t make the previous 3 quarters of the book any less frustrating to read to have it explained after the fact. It was more a lengthly annoyance followed by immense relief that all of Shiarra’s decision making, perhaps for the last several books, has been compromised. It gives me a lot of hope for a protagonist that I was beginning to lose all faith in. Ok, maybe a “lot of hope” is going too far, but still.

I also liked that this book saw Shiarra using some of her detective skills. Not in a particularly advanced or impressive manner – I think applied common sense could have done as much – but at least there was some detecting going on there. For the first time, Shiarra was believable to me as a detective.

The overall writing of the book was good to excellent. Detective stories that revolve around the cast desperately trying to find someone and not doing so until the end can be hard to pull off especially when, like in this book, you don’t have many side plots. How do you keep the pacing going? How does it stop being dull? How can you convey the frustration of the protagonists without actually frustrating the reader? This is a tricky book to pull off and this book worked. While I was annoyed by Shiarra and her choices (as I always am) the pacing of the book carried me through and I never felt the need to take a break or became bored during the writing.

There are still some problems I have – no-one has adequately explained why Shiarra can’t go to the cops or why the cops are compromised. I also think everyone kind of missed the part when Shiarra bled black sludge from her nose, eyes and mouth. I think that would be more concerning. I would be concerned. Black sludge is a bad sign – I’m sure doctors would agree with me. I also don’t like her returning trust for Chaz and his people (or taking their word for it that they’re not involved). I also wish she had tried to work with the Moonwalkers or Arnold and the Mages a little more – both offered far more reasonable help than the White Hats, both were more appropriate and both had better resources.

I am curious as to where the White Hats will go after the big revelation about their true origins and backing, though

Inclusionwise, there’s still a lot of problems and erasure. No GBLT people again. There’s a POC – Bo one of the hunters and he’s at least one of the more reasonable of them and more prominent, but still not the leader. And then women – we have Shiarra, some bit vampire parts, the completely absent best-friend-honest Sara who we’ve barely seen since book 1 and then all the women Shiarra hates. There’s Nikki, the hunter who hates her more than any of the others (even if she has good reason). And there’s Kimberly – the woman Chaz cheated on her with who she refers to as “tramp” “town jizz jar,” “cum-dumpster” “two faced anorexic bimbo of a cheating whore.” And, most legendary of all “smegma-guzzling-fire-crotch thunder c*nt”.  Which sounds almost like an advanced pokemon. Throw in Shiarra’s decision making and there’s some… issues with the way women are portrayed in this book. The marginalised people in general need work.

I finished this book feeling vaguely refreshed. A lot of the issues I’ve had with this series that have kept me from enjoying it have been, well, not resolved but at least addressed. They have been explained in a way that suggests that we will be seeing a different path from here. It almost leaves the series with a clean slate, or a clean protagonist at least, because I don’t know how much of her behaviour was being controlled. But it also leaves Shiarra to prove herself as a protagonist without any artificial aids which I’m very curious about in the next book – Just who is Shiarra and, more importantly, why should I care?