Deceived by the Others (H & W Investigations #3) by Jess Haines 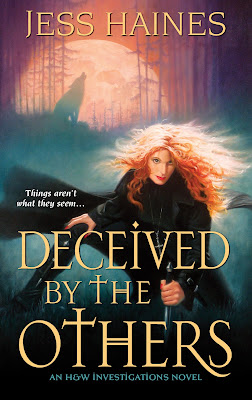 Shiarra is on the cusp of taking a big step – finally signing the contract between herself and Chaz that would formalise their relationship between a Human and an Other. Before doing so, she’s taking a romantic getaway with him to a camp site to spend some quality time together

And with his pack. While not as romantic as being alone, it does give her chance to get to know the pack and see Chaz around them. And find that while many hail her as a hero, not everyone is happy with the Alpha’s human girlfriend or her connections with vampires. Then there’s some pack politics to handle as well and…

Then all hell breaks loose. The holiday’s over, Shiarra’s running into hiding, but not happy to stay there. She’s plotting vengeance.

In the first 60% of the book I was severely losing my patience with it and kind of wondering what the point was. Shiarra is going on holiday with the Sunstriker pack during the full moon to get used to them, befriend them and, perhaps, take her relationship to the next level with her boyfriend Chaz.

This involved just hanging around, eating, drinking and enjoying the views. Chaz spent a substantial amount of time away from her dealing with various issues. She had some vague interactions with the pack that didn’t really go anywhere or really establish any characters (quickly forgot most of their names). There was a Mean Girl werewolf who hated Shiarra for random reasons but Shiarra pulled out some badassery to make her back down – so that petered off. I spent a lot of time wondering what the point was. If she was furthering her relationship with Chaz, I expected that relationship to develop. If she was forming bonds with the pack, I expected her to do so and spend time with them and develop some relationships. Neither really happened.

Then there were random sidequests. Seth and his teenaged minions challenged Chaz and were slapped down easily. End of. Was it supposed to be foreshadowing of Chaz’s true nature? Because it’s kinds of what I expected any way. In fact, the whole “revelation” to Shiarra that Chaz could be both violent in the face of rebellion and that he was politically minded seemed rather convoluted. Chaz is the Alpha of the third largest werewolf pack in the area, he commands 50-60 werewolves – surely being willing to fight down revolutions and being politically minded are assumed elements of the job? So it just kind of happened and then went away

And then there were the Nightstrikers – geeky shapeshifters who resent the Sunstrikers for being popular, bullying jocks. What are they supposed to achieve? Well, except break the whole story for me. As someone who has killed Onyxia, played WoW and is quite happy with geekiness (and I don’t think that’s unusual in the Urban Fantasy genre) I can’t help but feel… cringingly embarrassed by the depiction of the Nightstrikers. Not on their behalf, but at how ridiculously hollow and grossly out of date they are – out of date even when the book was released. It felt vaguely like the author had done 2 seconds of random googling of “Know your meme” and then splurged all the gamer stuff together. It was like watching one of those television programmes where one of the writers has discovered L33t and decided it makes one of the characters one of the most awesome hackers ever. It was embarrassingly ignorant, the characters didn’t even qualify as caricatures. It was like watching your dad try to be cool

And it didn’t work. They can’t possibly have been the viable threat that Royce and the White Hats were warned about. I can’t imagine Cassidy would allow these fools, regardless of family connection, to rampage around attacking and harassing his paying customers; it doesn’t make any sense, not for the sake of a childhood grudge. And how are we supposed to treat them? Because the book is treating them as silly, negligible comic relief, but these guys shot a silver arrow at a werewolf. They tried to commit murder – that’s not something to be brushed off so casually.

It was ill thought out and terribly put together.

There are also some loose threads that aren’t really explained and don’t seem to make a lot of sense to me – like both the White Hats and Royce getting ominous warnings (that Shiarra just ignored! How could you just ignore that!) before going on holiday. Warnings about what? Seth? The Nightstrikers? Because I can’t understand why either would be on their radar at all –and if they were, I can’t see how they would be so completely off the Sunstriker’s radar. Everything else that happened on that holiday were things that Royce and the White Hats can’t possibly have known about beforehand. And why would the police be trying to hunt Shiarra down – is this supposed to be the influence that the Sunstrikers have? Maybe that will be expanded in the next book but it feels odd and forced in this one

Thankfully, at 60% the shit hit the fan and we had some action happening. I thought Shiarra’s actions – dramatic and emotional though they were – were pretty understandable given the circumstances. I like that there was no space given for excuses and I like that Chaz’s own excuses were treated with the contempt they deserve, especially the whole “I’m a werewolf, I have to!” because there’s a whole load of justified by the woo-woo bullshit going on in the genre and especially with werewolves, so I loved that challenge.

At this point the story was fast and action paced. Shiarra was emotional and hurt, but active and moving.  She decided what she wanted and she made tough decisions to head that way. It was a great step up for her in setting her own path and getting on with things without brushing over her hurt or betrayal. And it’s written decently well enough to fully convey the extent of what happened and the full implications of it as well as the emotional impact of that and how shattering it is in their culture and place.

I quite like the evolution of her understanding of Royce – but I can’t help but feel that this Royce, willing to earn her trust, work with her, respect her and be ferociously disgusted at the idea of violating her consent doesn’t really mesh with the Royce in Hunted By the Others that forced the contract on her.

Shiarra is still a main problem for me. She does lots of things that don’t make a lot of sense – the number of warnings and outright threats in this book she completely dismissed or ignored astounded me. Several times she decided to do lots of risky, silly things that she acknowledged were risky and silly even when she had no pressing need to do so – like repeatedly swan out into the woods at night on the night of the full moon while surrounded by werewolves while repeatedly being asked not to do so. There’s a difference between being independent and being suicidal but I feel the desire to make her strong and unwilling to bow to pressure of command has made her unwilling to bow to common sense as well. And I just don’t get her relationship with Chaz. She says she loves him but when do we see it? In three books when have we seen it? They spend no time together and all we’ve seen over and over his Chaz’s jealousy for her. There was no established relationship that I found believable.

There are a few POC but not in major roles and no GBLT people – so other than some movement with women there hasn’t been a lot of progression when it comes to minorities. Even on the women front, we’re just not seeing a lot of other female characters – even with the number here that seemed promising to begin with ended up with enemies, Sara who doesn’t do an awful lot and some new female vampires who aren’t really developed. I’m hoping we’ll see more next book.

The ending left me a little frustrated. I feel that I can understand why Shiarra is doing what she’s doing, I completely understand it, it’s very realistic that she would do this – and yet I still want to say “no no no don’t! STOP!” Ultimately, it comes down to Shiarra not being emotionless and, when hurt, she does things that many people would do even if they’re not exactly sensible. But my main frustration stems from the cliffhanger ending, more than her risky actions. I’m not a fan of cliffhangers – but I’m even less a fan of them when you’ve spent 60% of the book waffling around not achieving an awful lot. Methinks that 60% could have been better spent

While it went a long way to redeem itself in the last 40%, the first 60 was just too weak, to waffling, too dubious and too full of rather pointless random events and loose ends for me to be a fan of this book. Frankly, if it had hadn’t have changed when it did, I doubt I would have finished the book, which is a shame because it did pick up and we now have the seeds for a far more involved plotline.