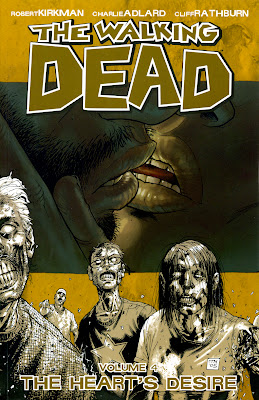 I think this is the first volume where there hasn’t been a definite theme I can point to and say “this is what this is about”. There are several potential themes and aspects touched on but none of them really maintained I think. In some ways, the volume is a filler, a deep breath. We had all the action of finding and clearing the prison last volume and now, after putting the rebellion down, they have to live there. So there’s a chance for people to live there.

If there is something I can put my finger on, it’s mental stability coupled with the reality of their situation hitting home as they have more physical security to actually consider things. We see this in both Rick’s iconic ending speech heavily foreshadowed with both Sophia and Carl talking about how the zombies are sad and Axel considering how every zombie was once a human. It combines together with the revelations of the last volume to drive home that every single one of them will become a zombie. There’s a despair to that which Rick underlines at the last page.

But this is also when all the stress they’ve been under rises to crack them – Carol being driven off the edge by Tyreese’s cheating on her and her attachment to Rick and Lori. Michonne talking to herself after all her loneliness. Allen almost welcoming death. Lori taking to her bed and just not being able to face the stress any more.  And, of course, Tyreese and Rick having their blow out.

Rick is the classic because, as the leader, he has also been establishing a growing fragility as he lashes out at anything that threatens the unity of the group. After all, he is the one responsible, he is the one people look to; he consults Tyreese but largely he’s been made leader. And it’d probably be nice to have zombies as the only worry – but it’s the people that are causing more headaches. Last volume we saw him completely lose it (albeit more understandably) on Thomas and this week he loses it again on Tyreese, trying to maintain that control and losing it when he can’t.

Finally there’s a sense that they have to change – it’s only introduced this comic, but it’s going to be ongoing. Rick’s epic speech – you need to kill to live – is, of course, the most obvious and powerful part of it. But even in the beginning Tyreese talks to Rick about looking again at the whole idea of executing murderers and taking death off the table. A new debate is emerging – how much of your humanity, your standards, your principles can you keep and how – and what it will cost you to change or not.

I think it’s a solid introduction of themes that are going to remain present throughout the series – how do you keep the group safe and united, what are you willing to do to make that so, and what will it cost you mentally and emotionally to do that. Or to fail to do that.

Of course, there are issues ongoing. And we will start with the treatment of women. This volume Lori wasn’t nearly so hectoring as the opposition – though she did Take To Her Bed. We also had Andrea fully accepted and expected to be part of the combat team and, of course, Michonne stepping into the picture and kicking arse better than anyone. While we’re not a big fan of women-as-weapons being used as a stand in for actual developed strong characters it’s still a relief to see women fight after the first volumes of utter female helplessness.

Sadly, this appears to be the only strength we see. Michonne I can understand being quiet given being a new arrival. But if it’s not Lori (whose every opinion is completely dismissed as her terrible silly lady hormones making her emotional and not to be trusted there-there let the men do your thinking for you), no-one speaks up. Dale is considering whether he and Andrea will stay or not – and Andrea? She will go where Dale goes. Does she have an opinion? An idea? Anything? Carol? Idea? Input? Anything? Noooope. Maggie? Nah, she and Glennn are off in corners getting it on and not really doing anything. Aha! Patricia! She has ideas – except she’s being Lori’d. Her ideas are so patently ridiculous she’s just a walking Spunky Agent and, besides, she sided with the Enemy so isn’t going to speak or be acknowledged if she did.

To top it all off we then have the ruling council:  Rick, Hershel, Dale and Tyreese. Even Rick commented on the lack of women – but that’s ok because none of the women WANTED to be in charge. Oh no, they just want to be protected and let the menfolk make the decisions.

It’s one of those moments where you just have to look at the page and say “seriously? Are you seriously trying to sell this?” Of course, they point out that Glenn was also not included – but this is hardly redressing the sexism, it looks far more like the racial trop of the emasculated Asian man.

Which brings us to race. We had Michonne introduced to the cast and there are some major pluses here – especially in light of how she is portrayed on the show. She discloses a lot about herself in that short period, even her habit of talking to herself reveals far more about her emotions and thoughts. She’s a loner by nature but she still makes conversation with people and, despite precautions, she’s cautiously welcomed into the group. She also has facial expressions.

This is good. What is less good is that within seconds of arriving she honed in on Tyreese, the only Black man left standing and had sex with him, referring to Carol, his girlfriend, as a “skinny white bitch” and securing Tyreese by performing sex acts Carol just couldn’t bring herself to do. This in turn lead to Carol’s suicide attempt and the whole massive drama. The drama of this volume was caused by an almost textbook Jezebel stereotype and a Black man who was cheating on a delicate, fragile White woman.

That’s a hot mess right there. Then there's Otis, the overt racist joining the team. At least absolutely no-one respects the man and we're in no way expected to agree with his filth - but please let a zombie eat him soon.

Of course, the other 2 Black men died in the rebellion – taking with them the closest thing the comics have to GBLT characters as well

On the whole, I think this comic was semi-fillerish but also needed to take a breath before bringing on the next uber-dramatic storyline. There’s a limit to how much human-driven drama llamas you can have here