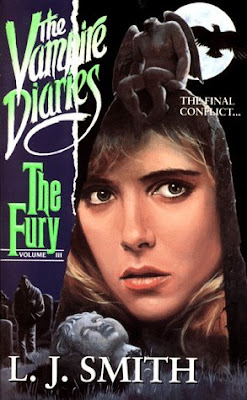 Elena wakes up from where she has been pulled out of the river – she’s not dead; or rather she is, but she’s a vampire. Which means she has a whole new life to prepare for as a blood drinking creature of the night. Further, she’s in Fells Church where everyone believes she is dead – an act that is causing all kinds of drama and grief.

And then there’s Stefan and Damon – though betrothed to Stefan she now looks at Damon and finds him unnaturally compelling because… I don’t know, just run with it. As she gets closer to him as a vampire it becomes clear that not all the evil acts they’ve been attributing to him may actually be his fault.

Then the dogs lose their shit. Definitely not his fault. There’s an Other Power in town and it’s targeting Elena. And it’s only a matter of time before someone dies.

I think Elena has grown up a fair amount in this book to some degree. Her motives and goals are much less self-absorbed and self-centred and she’s moved away from treating everyone around her as servants who exist only for her whim (even though everyone around her are pretty much servants who exist only for her whim). We even have some pretty good moments of self-reflection where she realises what a selfish, manipulative person she was! An excellent start – albeit somewhat deadened by the fact that everyone else assures her it wasn’t so and it seems to exist largely to give Elena something to angst about.

Still, Elena is a much improved character. That’s not entirely surprising considering how much room she had to improve, but it’s still motion upwards.

I do not like the love triangle, not even slightly. Even working on the fact that Damon isn’t quite as evil as everyone imagined, that still leaves him pretty damn evil. Elena and Stefan have also had virtually no real communication or contact with each other – especially non-antagonistic where Elena hasn’t been furious or terrified. The insta-love she felt for Stefan was bad enough – happening with virtually no foundation, very little mutual communication and quickly careening down the path to becoming Stefan’s fiancée, but this is several orders more ridiculous. Other than his physical appearance, what about Damon has Elena fallen in love with? Give me one feature of his personality, one element of his character, one action he has performed that makes him a viable love interest for Elena?

There’s nothing – this romance has no foundation. But now she finds the idea of choosing between Damon and Stefan so damn hard? Now Damon is a competing love interest? Now we have a love triangle? It makes no sense to me, not even slightly and makes her previous, already dodgy love interest with Stefan seem even more dubious. And it was already pretty dubious.

But there are 2 main elements of this book that really break it for me.

Firstly the melodrama! The awful, over the top, emotion laden, drawn out angsty monologues and hugely flowery, purple descriptions get on my last nerve. It’s a short book, yet so much of it consists of drawn out rambles of what people are feeling and really really over-wrought writing. I just can’t get into it.

Secondly the story. They have this menacing and ill defined “Other Power” out there doing bad stuff. And bad stuff happens. They don’t really do much about the bad stuff except guess who it could be and kinda sorta follow them. Dogs run around being menacing, the weather’s nicely dramatic, there’s a scary kitten – and they continue to wander around and have the odd conversation and angst session.

And in the end the bad guy kind of waves at them because nothing they’ve done (or the teeny tiny foreshadowing) actually leads to the bad guy at all. It’s another one of those stories where the only reason the mystery is solved is because the bad guy gets tired of their ineffectual flailing and decides to attack them.

Oh, there’s another thing I hate – the big bad. I don’t want to spoil, but they needed a moustache to twirl in devilish glee. Never has a being who is supposed to be so ancient come off as so childish. They could have stomped their feet for a full on temper tantrum. They actually monologue in such a melodramatic fashion that the James Bond villains would stage an intervention and ask them to tone it down a little. I couldn’t take them seriously, not even remotely.

And, of course, Fells Church is still the straightest, whitest place in the world. I’m choosing to believe that POC and GBLT folks turned up, looked around and drove right out again.