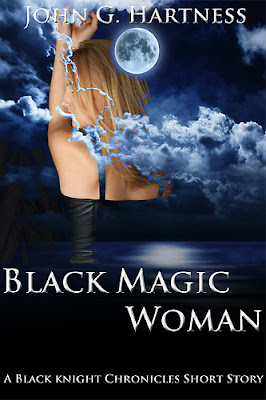 Sabrina, Gregg and James go to a comic convention – only Gregg is there by choice but they both lost bets. Damn cheating vampire.

But a vampire can’t even rustle up comics back issues without running into a supernatural nasty to take out. And that doesn’t include the guys follow Sabrina around in her short shorts.

In many ways I think this novella is a lot like Movie Knight. It has a good introduction to the characters, a sense of the weird and the wonderful things they face, a good idea of how everyone interacts, how they think, their tones and natures as well as a decent exploration of the world.

Like Movie Knight, it also presents an opening to some of the more weird and unusual things James and Greg face above and beyond the normal. A quick little adventure so that those who have already read the series still have something of interest to see and be interested in; while at the same time not being so different and new as to leave completely new readers floundering and unable to keep up

And yes, the world building and information continues to hit that balance between filling in all the gaps necessary for a new reader to keep up while, at the same time, not completely inundating an old reader with stuff we already know. That takes some real skill.

It’s also kind of gloriously fun to have vampires at a geeky comic convention.

Unfortunately, this book also show cases some of the problems that the series has as well. Like Gregg being a fat vampire – which is nicely rare and I love that he’s included, but I’m less thrilled with it being something constantly referenced – especially when he wears spandex. It’s a short book and there are an awful lot of cracks about his weight within it.

And then there’s Sabrina. I’ve said before how much I love Sabrina and James’s relationship, I like how its developed, I like how its flirted close to several tropes but never quite gone over the edge. There’s a lot to like here. What I don’t like is that James has a severe case of Dresden Goggles. It’s rare for him to meet a woman without assessing her sexual attractiveness and that then becoming a major element of his description and interaction with her.  In this novella we have both Sabrina cosplaying as Lara Croft with the inevitable mass appreciation of her skimpy outfit and we have a big bad of a super-seductive beautiful woman who enthrals men to make them do her bidding

That’s an awful lot of female sexiness crammed into a small book. And yes, Sabrina is still capable and strong and snarky and funny and saves the day – but we still spend as much time describing just how very very very hot she is as Lara Croft as we do anything else.

In all, it’s funny, it’s fun and it’s a great introduction to the series. If you are considering reading these books (and I’d suggest it) then read this and Movie Knight, they’re cheap and great introductions to the tone and setting. They’re extremely good at introducing this series to a new reader and whetting the appetite of an old reader waiting for the next book to come out

But this one also serves as a warning, sadly, because both the treatment of Gregg and sex women are also a pretty good primer to the series as well.