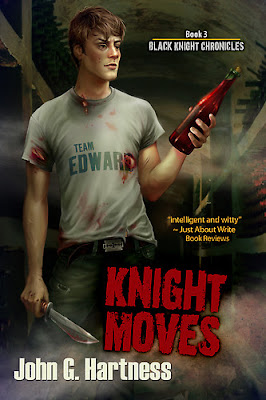 James and Greg are called for a rather worrying murder – a body drained of blood and ready to wake up again as a vampire. Yes, they’re not the only vampires in town any more.

They’ve been noticed now – and not only do they have a baby vampire to look after, but James’s creator is in town. Throw in a pack of college vampires preying indiscriminately and an old vampire who claims to be the boss of all vampires in the city and there’s a lot to handle and a lot to learn

Even before the werewolf vampire hunter shows up

Greg and James’ experience as vampires is interesting and grows complex in this book. I have previously said that I loved how we had 2 vampires who genuinely enjoyed being vampires. In this that changes a lot – while James still very much revels in being a vampire, he clearly still holds a severe grudge against the vampire that sired him. This is as much from the way he was sired as anything else. But Greg goes beyond that – he doesn’t like being a vampire, and part of that is linked to his weight, as a fat man who can now never lose weight, he resents being a vampire, but part of it is linked to the old cliché – he won’t be able to grow old and have kids. I have to say I don’t like the meme, it’s been done too often and there’s rarely enough justification for why people should hate being supernatural immortals so much. In this case we have more because of the way they were sired as well as watching their childhood friend grow old and develop cancer it probably brings it home much more powerfully. So, it’s a more reasoned depiction of the whole “woe is me I’m a vampire” and they certainly don’t spend pages whining about it, but I can’t help but be sad that they’ve reversed something in the series I loved so much.

But this also partially reflects their conflicting attitudes towards what it takes to be a vampire. Greg is ferociously dedicated to drinking blood only from blood bags and hates that James continues to bite people and teach the new vampire Abby how to hunt. They even have an outright argument about it when James finally snaps in the face of Greg’s judgement and reluctance because Sabrina is in trouble and it’s time for Greg to act like the apex predator he is. In some ways it’s reminiscent of the whole Musty Vampire vs Evil Fun Vampire trope we see a lot – but by making them friends and the differences not so extreme it adds a lot of new angles to an old idea.

I really quite like how Greg and James were introduced to the greater vampire community and authority. It’s interesting because, again, it’s so very different from what we’re used to. So often the local vampire authorities are extremely powerful and not to be messed with – they serve as a deus ex machinae, a limit on character actions. But Greg and James, because of their contact with Sabrina (and I also like that killing a human detective isn’t seen as something that can be done in a casual or offhand manner, even for a vampire) and the fae in previous books, they’re too much a wildcard to be so dismissed. It strikes an excellent balance between having a vastly older more powerful vampire to be respected, yet not having to grovel – it, again, flies in the face of many tropes and not just because the protagonist is cocky and spunky and refuses to grovel when they should. I like that the master of the city is clearly powerful through machinations and plotting not just age and power – and the plotting is rather nicely displayed.

I do like the dynamic and the relationship growing between Sabrina and James. They have finally taken the step into becoming an official couple. I love their declarations of affection for each other which are wonderfully well written, passionate and heartfelt without being soppy and ridiculous. I love their couple dynamic, I love how they interact. I love how James respects Sabrina’s strength and capability and values her and wants to save her without wanting to stuff her in a box to be kept safe.

I do not like that she needs to be rescued. Again. This is becoming an annoying habit that this supremely strong, confident, capable woman is repeatedly imperilled and needs rescuing by a man. It’s an old trope and it feels like some kind of requirement for strong female characters – they need to be kidnapped and rescued as some kind of reassertion of femininity. Like, yes she’s strong, yes she’s capable even yes she’s dangerous – but under it all she’s still a damsel. Especially since James’s “sister” Abby is also put in a situation where James rescues her. It’s a mixed bag – because Sabrina is powerful and dangerous and Abby can definitely kick arse. Sabrina openly challenges any sexism towards her and the brief jealousy between Sabrina and Abby over James is quickly shelved. But in some ways it seems even worse to set these two characters up as capable, powerful, strong, dangerous fighters and STILL have them kidnapped in need of rescue – which is hardly the first time, Sabrina’s getting her card stamped so many times she may get her 10th rescue free voucher.

I did like that, though Lillith was a bit part, there was far more respect for her power – even acknowledging her as The power in the city. And I liked the summation of her history – albeit highly simplistic, it emphasised that she was damned because she demanded equality – that she expected to be treated as an equal.

We have some background POC but not much more as far as racial inclusion. One thing that is interesting is that this book is set in the south and James openly challenges some really racist attitudes in his own family. That isn’t to say that all southern USA-ians are racist, of course not – bu this is interesting for the genre. The southern US states – and confederate vampires both – are far from uncommon in the genre. And there’s a lot of romanticism going on and a whole lot of whitewashing goes with it – so it’s quite refreshing to have an unvarnished, not going to look away from it condemnation of the romantic, racist attitudes.

We don’t have any GBLT characters in this book like we had in the last – but we still have those annoying gay vampire jokes. And while I like the novelty of Greg being a fat vampire it is ridiculously over-referenced.

Another interesting dynamic is how capable everyone is around James, not just Greg (who seems to have so much more power and intelligence than James in so many situations) but Sabrina as well. It’s interesting to see a protagonist who has more powerful, in many ways, sidekicks and its his drive and even his leadership that makes him the protagonist not the special woo-woo that his friends cannot match.

I’ve mentioned a lot about the characters in this review and the themes and the unique elements and not so much about the story. This is largely because the characters are what makes this book – but the story definitely carries them well. It’s very well paced, well written, with sufficient twists to keep me interested without it becoming convoluted –or at least not more convoluted than you’d expect the plots of ancient vampires to be. The world building hits that sweet spot of descriptive enough to let us know what’s happening, with sufficient hints of more to come without making too much of them so they distract the story. With the Sluagh around, we even have tiny hints of a metaplot that is building up. It’s some really good solid writing.

All for a good solid book building on a series that is rapidly becoming one of the ones I watch out for. It’s fun, I’ve enjoyed every minute of reading every book without a second of hesitation or distraction – and it’s a vampire book that is simply different, while still being primarily about vampires – and I value that almost as much as I value their humour, exciting story and well maintained style. It's fun, it's funny, it's clever, it has an exciting story and some powerful characters - it ticks the boxes and is an excellent read.