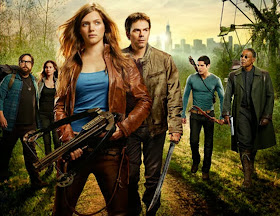 In Spring City Oklahoma, Grace is a little surprised to find Aaron because she’s moved there to be completely alone and forget everything about the Tower and what happened there; and then the Nanites send Aaron to find her. And he’s just the second surprise visitor – a woman always walked into town before collapsing from heat stroke. Priscilla. Aaron’s first wife

Damn, Grace, who thought being a hermit would be so hard?

Apparently Priscilla has been lead to Oklahoma by hallucinations of her dead father. And fireflies. Yay, hallucination buddies! Well Priscilla’s relieved, she thought she was losing her mind (eerr… Aaron ALSO losing his mind doesn’t mean you’re not losing yours).. They update everyone then ask Grace what’s going on. Apparently Grace thought the Nanites could wake up – after all, if a brain is a lot of neurones talking to each other then a cloud of Nanites talking to each other is pretty analogous; especially since there are a cagillion gazillion Nanites that, when networked form a (in Aaron’s words) big ass brain.

Why Aaron and Priscilla? Because the code Aaron invented was the one Grace, Rachel, Warren and the other Nanite inventors used to create the Nanites. And Priscilla helped him with the code creation. Awww they’re Mummy and Daddy nanite! Though apparently someone called Peter also helped and he’s absent. With them reeling, Grace decides to hit them with another whammy – a powerful, omnipresence force with its own mind sounds a lot like God to her.

Alone, Aaron and Priscilla update each other on their respective love lives (Priscilla’s new husband couldn’t handle Priscilla apparently losing her mind so left her and took the kids with him).

In Mexico, Connor has heard his dad’s offer of a new fascist state just as soon as the pair of them wrest it off the Patriots and has decided that it’s not all that tempting and takes him, bound into a compound with lots of partying and a hanging body as a warning. Outside, Rachel and Miles watch and Rachel repeats my thoughts about them actually choosing to RESCUE Monroe.

Inside the compound they go to the boss man’s office and he’s very very paternal towards Connor – a definite father/son relationship going on there. But the boss man, Luis Nuñez, is pretty welcoming to Mornoe – at least on the surface (Monroe is pouty) and Nuñez stakes his position – he found Connor on the streets, he took Connor in and he raised him. And to prove the point – he asks Connor what he wants to do with Miles and Connor suggests selling him – someone’s going to want Monroe.

Which means Monroe gets to be locked up – but he still tries to warn Connor that Nuñez is dangerous and he should avoid him – yeah, have you not picked up the adopted father dynamic yet, Monroe? Monroe runs with “he’s not your blood” which doesn’t impress – and then Miles, having infiltrated the compound, knocks Connor out. But Monroe won’t run because then his escape will be Connor’s fault. The end result of which is that Miles is imprisoned as well.

Tell me again why rescuing Monroe was a good idea. Miles is not impressed by claims of fatherly bonds to a man Monroe has only known for 5 damn minutes.

Don’t worry Rachel is still out there! (Wow, and when you’re falling back on Rachel you know you’re pretty damn desperate). She gets herself invited to the party; while inside Nuñez is curious as to exactly how Connor stopped Monroe escaping and suggests punishing Monroe for trying to escape. When Connor advises against, Nuñez leaps on it as suspicious – of Connor being sympathetic to Monroe.


Monroe is taken out to a balcony in front of a screaming crowd and strung up by his wrists and Nuñez hands a whip to Connor and Connor whips Monroe. He continues to whip him until he stops and asks Nuñez if he wants to sell Monroe, or bury him and Nuñez has him cut down – still looking suspiciously at Connor.

Rachel starts to enter the main house – and Connor catches her and gives her a key to free Miles and Monroe. Rescue time – they escape but are stopped by Nuñez and one of his goons holding a knife to Connor’s throat. Nuñez is pretty wounded at Connor choosing Monroe over him and leaves after saying goodbye. Fight scene time (Monroe distracted by pointing out to Miles what a good fighter his son is). Everyone’s massacred and the four of them escape

That night Monroe and Connor talk – Connor has regrets but Monroe is confident he can get his little fascist police state back with his son by his side.

Back in Texas, Charlie and Gene are spying on the Patriots building something and Gene’s good friend Mike is on the scene. I think Charlie and Gene may be just bored. Gene wants to launch a rescue attempt and Charlie reality checks him that an old man with no warrior training is not going to infiltrate an armed camp, no matter how big his guilt complex is.

Good gods gene, Charlie is the voice of reason. Charlie. If you keep this up, Rachel will start being the sensible one in comparison to you and then there’s no hope at all.

Despite this common sense, Gene infiltrates the camp anyway and finds his friend, Mike’s body (disposable POC again on Revolution) and then he has to be rescued by Charlie; which gets them both captured.

Chief Patriot unchains them and takes them to… a plague tent. A Typhus epidemic is striking and they’re preparing a quarantine camp. He wants Gene’s help to fight the plague, before they lose Willoughby entirely

On the east coast, Neville and Julia continue their charade, with Neville pushing to be part of her husband, Victor’s security detail; there is definitely ongoing tension between Neville and Julia. Back in the military camp Jason shows Neville the papers he stole last episode – the Patriots are creating far more re-education camps like the one he was in, and Victor is in charge of them. And he expects Neville to do something about it

Neville goes to confront Julia but she’s not helping at all, she has no wish to change her plan – nor, in Neville’s eyes, any real wish to advance it either. He accuses her of being happy where she is, married to Victor and we get some jealousy flaring up. She warns him not to go through her husband’s files

Cut to someone having broken into her husband’s office and gone through all his files. Julia goes to pay Neville a visit to accuse him and he denies all knowledge (“don’t give me that poker face” “this poker face is my face.” Snerk – so very very true. Line of the night). But Neville denies all knowledge – it wasn’t him. It was Jason and he found more out – the reprogramming is stage one, genocide, wiping people out is stage 2. Which is when several troops arrive to arrest Jason

I still hate what’s happening with Julia and Neville. It’s destroyed their relationship and how it was before. No longer does it look like two people, in love and united in cunning and guile and ruthlessness against the world; instead it looks like Julia sticking to Neville for comfort – and then jumping ship to a better offer when the time came, without any real care who that man was. It feels less like their mutual ambition together and more like Julia’s ambition – with Neville just a tool to get there.

Which means their storyline doesn’t fascinate me. Monroe, Connor and daddy issues? Not interesting to me. And even if they do return north and fight the patriots – fight them for what? The restoration of the Monroe republic? Hey, this is Season 1 calling – can we have a NO on that one?

Gene and Charlie doing whatever it is they’re doing? Yeah… not fascinating either. It could be – being a mission with an actual goal, sabotaging the Patriots, but it’s too minor next to Monroe’s family drama to really progress and add coherence to the story. Which leaves Aaron which I can’t say is incredible but I’m watching in a kind of curious, Mad-libs kind of way. It’s not exactly enthralling, I’m just curious about what random thing is going to pop up next

So Connor never knew Monroe, complete stranger to him. Never even knew who his father was. On the streets he was taken in by Nuñez, taken into his home, raised him, treated like a son. They have a strong bond and they act like father and son together. And then BIOPARENT arrives and shatters it all by his mere presence? Loyalties changed, suspicion instantly flaring up, parental bond destroyed… The power of DNA trumps any actual parenthood!