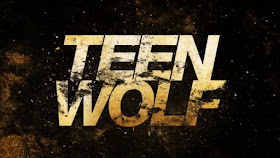 Theo is putting together his own pack from resurrected Chimera and making it clear that they’re all somewhat changed after coming back to life. Josh, the drug addict chimera is now happily jonesing on electricity. Tracy murders her father in his hospital bed. Apparently this is a thing they do now

Except Hayden – while she’s all conflicted by Theo and her new feelings, she’s definitely fixated on Liam still (while her sister is, understandably, rather worried about her disappearing for several days, and spending that time with baby-wolf Liam doesn’t reassure her any) because True Love and I can’t even begin to say how little I care about these two characters. It does mean she’s rebelling against Theo and he Does Not Like that.

There’s also Corey – so yay, one of their over-hyped and quickly killed gay characters is back from the dead – to cower and hide. Really. All the other Chimera are scary and have lethal powers while he has the power to hide and shiver and be super-duper scared because zomg FANGS! Yes, thank you Teen Wolf for making the gay chimera the shivering one.

On the plus side, which I’m desperately clinging too (but not too tight because after 5 seasons I’m done hoping about this show and gay characters), he does have a date with Mason which means that possibly, just possibly, Mason may get something to do other than being counsellor/shoulder to cry on for Liam. Which he also does so very much this episode.

So why does Theo want his undead chimera pack? Because there’s a big scary monster out there – the ultimate killing machine the Dread Doctors have created – or resurrected since various sources confirm it’s an ancient terribad scary thing. Theo wants a truce with Scott so both their packs can work together (possibly because all his chimera together can’t bring down Alpha Scott even if he is injured, because ALPHA damn it!).

On to that big scary monster – to me it looks like an old-style Alpha monster werewolf. Either way it’s big and it’s very very very scary and it’s killing people apparently for funsies. We’re supposed to be scared of it – I’m not saying it’s not scary but it hasn’t been sold to me yet

I mentioned that Theo wants to bring the packs together – which means Scott needs a pack, which is pretty hard since absolutely no-one is speaking to him. The first step is, of course, Stiles

Stiles and his dad continue to steal the whole show with some pretty epic scenes. They discuss Donovan – the guy Stiles killed. And it’s painful and emotional but the Sheriff makes it clear he is beyond certain that Stiles would only have killed in self-defence, law or not, he would protect his son. Which conflicts a little with his opinion on Kira – but rather than say this was a super-duper exception for his son, he admits to being wrong and re-examining his position on that

They talk redemption and forgiveness and how killing someone leaves a mark – and what Stiles needs to do to try and get past what he does. This involves both saving other people – and forgiving himself, starting with forgiving Scott

They really really do work well together

In a really touching, awkward, full-of-things-neither-one-is-saying-aloud-but-is-still-clear Stiles goes to Scott (who is bad at the investigating thing without Stiles) and they work together, finding clues and being the excellent team they are to try and track the monster. Their scenes would be the best of the show if we hadn’t already had the Stilinski’s together

At the end Stiles insists they need the rest of the Pack – Liam (who is still angsting around how to say sorry to Scott after the whole trying to kill him thing), Kira, Lydia and Malia

Malia is busy with her own thing (yes she finally has her own storyline! Finally!) – she wants to find her mother, the Desert Wolf. And she and Braeden (look I’m really glad to see her back, but I need some motivation here, not her just serving a storyline with no indication of why she’s doing it) are questioning random people to find her. She’s also kidnapped Deaton

Hey, anyone remember Deaton? Everyone seems to have forgotten him!

Kira and her mother are in the middle of nowhere fighting Skinwalkers – this could get messy; but Kira having her own storyline!!! Please more of this!

Sadly Lydia has gone all catatonic in Eichen House. She’s also spirit walking around the creepy house and running into the ghost of fellow banshee Meredith! I’m torn – on the one side I love the idea of Lydia being taught to fight and be capable and not the eternal victim. On the other side I don’t want one of this show’s few POC coming back just to tutor and support a white lady. Braeden’s already got that covered.

There is no way the beast can be worse than him!