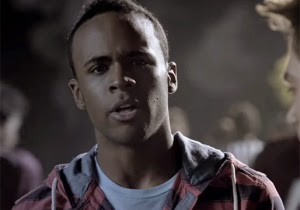 Recently The Advocate ran a blatant marketing piece where the cast of Teen Wolf sounded off on what a wonderfully LGBT inclusive show Teen Wolf was and how important and special it was. This isn’t the first time The Advocate has waved Teen Wolf’s very dubious inclusion flag.

Frankly, every single thing they said is so enragingly wrong as to be almost comical and I could go through each quote and tear apart how wrong each one is but Farid Ul Haq at the Geekiary already has done pretty awesomely (and in a previous post when Tyler Posey apparently thought Teen Wolf focused on a gay storyline at some point. I can only assume powerful hallucinogens were involved, or the show was cut EXTENSIVELY before reaching TV).

This is rapidly becoming a trend. The show creators of Teen Wolf definitely have a habit (and, yes The Advocate is an eager collaborator) of pushing their very slim inclusion as a marketing tool. In the past the cast and writers have been happy to play to slashers on multiple occasions. Before season 4 they pushed that they were introducing a new gay character - Mason. Check the quote, I’ll repeat it here for wry comedy:


Hey, remember his heavy involvement? Do you? No? No, you don’t because it never happened. Mason was a token lurking at the back of the cast who rarely appeared for most of the season and received zero characterisation. They also failed to mention they were dropping Danny (despite hints - yes more hints - of his heavier involvement at the end of season 3) without any explanation because they


Of course there wasn’t! He had zero character! He had zero storylines! He had zero involvement in the plot! There was nothing there for him because there was never any attempt to give him anything. Which, also, is the reason why I have not the slightest word of praise for Teen Wolf’s “orientation-blind Utopia” because it’s, frankly, nonsense. Homophobia hasn’t been removed from Beacon Hills out of some vision of an ideal world when prejudice is dead (apart from anything else the plot rejects it - why would Scott dancing with Danny as a joke to put off Coach even have worked if there wasn’t a culture of gay kids being kicked out of proms?) - it’s a consequence of not wanting the LGBT characters to have storylines! After all, if there were homophobia in Beacon Hills then Danny or Mason or the blink-and-you-miss-her Caitlin would actually have to have a storyline around it. That isn’t praiseworthy - it’s just an excuse for tokenism and laziness.

Teen Wolf is not even close to an isolated example - too often we see hints and nudges passed off as actual inclusion, punch lines as characters and tiny tokens as main characters. Show creators, producers, actors, writers et al play to it for their marketing when addressing LGBT people or people they think are LGBT allies (or slash fans) - The Advocate is a repeated tool in this respect - previously having non-existent bisexuality being pushed in the Divergent film and scraping the barrel for an LGBT analogy in a Grimm episode. But it’s not alone - The Backlot actually wrote a separate post about their feelings on Goyer using them to  sell Da Vinci’s Demons as a pro-LGBT show.

The Expendables 3 has desperately tried to claw up a same-sex relationship based on a throwaway “get a room” joke. Paranorman has spun a punch line at the very end of the film and suddenly hailed from all corners as a virtual pride parade of inclusion. How To Train Your Dragon 2 doesn’t even go that far; making a very dubious ambiguous statement but the inclusion bell was rung! Frozen had some people in a sauna seen for half a millisecond and you’d have thought Elsa had frozen the Castro for all the inclusion excitement we got. Teen Wolf is also not the only show that has constantly played to slash fans - the actors and creators of Supernatural have slashbaiting down to a fine art.

And now we move into the latest round of “ZOMG INCLUSION!” celebration, The Walking Dead, a show that, to date, has had the very brief inclusion of two very minor LGBT characters (one of them’s dead) is now hinting that Daryl may be gay. Yes, one of the main characters may be gay - with Norman Reedus even saying he plays Daryl “prison gay” (I… what… seriously?). And whoa boy are they milking this with plenty of little hints - no confirmation of course (was that what Teen Wolf did with Stiles? Why yes, yes it was). But I’ll lay odds now that there’s no way Daryl is going to come out in season 5.

Naturally, a lot of the blame for this goes to content producers - throwing crumbs at us and expecting us to call it cake (or not even crumbs). They generate marketing buzz and raise the hopes of LGBT people and our allies and the slashers for ratings, attention and word of mouth but never follow through on what they promise. Worse, they exploit the desperate wish for an erased minority to see themselves in the media time and time again. They know we’re hurting. They know how badly we need representation, how important it is to us, what it means to us - and they are exploiting it for every damn penny without giving a damn thing to feed that hunger. They are profiting from our pain and it is beyond revolting and beyond unacceptable.

I would like to say the comments on the Teen Wolf article give me hope, but even then a substantial number seem to be motivated less by “are you drunk?! You consider these minor tokens awesome inclusion?!” and more “but where’s Sterek, Precious?! We wants it, we does!” which I also have problems with.


This has to stop - if you, as a writer, director, actor, whatever have to TELL us your show/film/book had an LGBT character? Then you haven’t represented LGBT people and you don’t get praised for it. If you’re going to ply media and fandom with rumours for the sake of marketing then you need to deliver - maybe not the spoiler in question but at least something on par with what you’re hinting towards. No more crumbs, no more hints, no more ambiguity, no more bait and switch - enough. Include or don’t, but producers need to stop throwing crumbs and fandom needs to stop gobbling them up and calling it cake.
Posted by Sparky at 9:00 AM