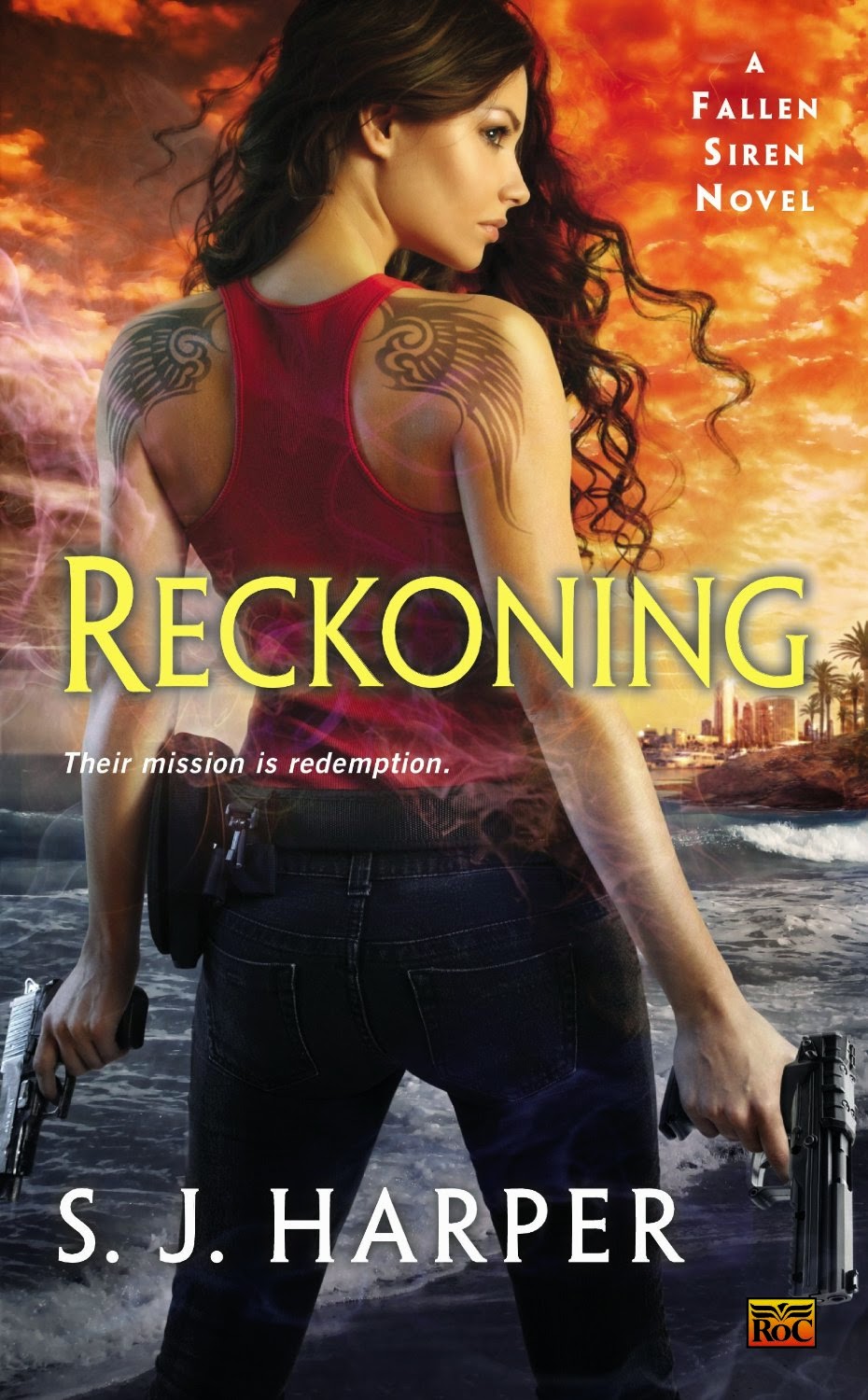 Special Agent Emma Monroe is an FBI agent who finds missing children – both as a profession and as a curse laid on the siren by Demeter in revenge for her failure to find Persephone. As part of that curse, Emma may not be happy, may not fall in love.

And love is not what she shares with Kallistos, the vampire king who shares her bed, though they certainly have fun. Less fun is her FBI partner Zack, werewolf, professional, fellow agent – and ex lover. If he could remember it – unknown to him they were once lovers and deeply in love and unable to be together without risking Demeter’s wrath. Saying no, is hard though.

All three are drawn into the hunt for missing girls – but it’s a hunt that spills over from her professional life to the supernatural as both werewolf and vampire politics raise their ugly heads.

There is a lot of sexual tension in this book, certainly more so than in the first book – but it’s just that for most of it, tension; there’s a lot of both of them lusting after the other, a fair amount of physical description that isn’t always necessary and more than a dollop of angst because of the curse that keeps Emma and Zack apart. There’s also a thread of angst between Emma and Kallistos; she has a no strings attached relationship with the vampire, the only kind of relationship that could work for her.

In many ways it does work, neither of them are embarrassed or ashamed about having casual sex, nor is their relationship considered wrong, something to hide, something to be embarrassed about or in any way it’s nice to see. But at the same time it’s inherently cast as inferior because it will always be the second choice to Zack and that shadows the whole thing – no matter how casual a relationship is, Emma pining after another man does not exactly make Kallistos feel happy and joyful. So it’s a fairly good representation of shameless sexual relationship but still holds it as inherently inferior.

The other source of conflict in their relationship is Kallistos being a vampire ruler and, because of that, a man who does evil things out of necessity. This is one of the better conflicts of the book – because it’s very tempting to look at Kallistos as the good vampire and then Lamont, an antagonist, as the bad vampire. But there’s a lair of complexity there – Kallistos is not a good person, he cannot even be a good person and still hold power. In fact, it can even be argued (and he does argue) that he cannot be a good person and even be a vampire – he can be a less bad person – but ultimately he is a being that preys on humanity which, on some level, means the exploitation and use of humans; made more fraught by the necessity of secrecy. I like how it looks at many of the things that other books may present as hallmarks of a “good” vampire and points out that “less bad” and “good” are a long way apart – and messing with people’s memories, stealing their blood, etc are not ever going to go in the “good” column.

So there’s a lot of emotional conflict here, some of it is romantic. But, while they are dominant parts of the book (and certainly more dominant than the first book) they don’t overwhelm the story because, whatever else Emma and Zack are, they’re also supremely professional. And their profession is FBI agents who search for kidnapped children. By definition that has to take priority – and allowing their issues to eclipse that search would just be unacceptable on an epic level to both of them. Even when consumed by lust, burning with rage or all mopey with angst, that need to find these children before the worst happens means all of those issues simply has to go on the back burner. They can’t dwell on it, they can’t be consumed by it, they can’t be distracted by it – so these issues can be powerful, present and very felt by Emma and Zack, they never actually derail the book as is a common annoyance. (Books where protagonists will actually pause to scream at their lovers while the enemy is RIGHT THERE, or delay an escape attempt to have sex in a cupboard or in the mud exist and annoy me).

Another element I loved about the previous book is that, while there is a lot of woo-woo in this world, it’s not overwhelming and nor does it replace the need for the police to do actual police work. Zack and Emma’s problems – and Emma’s job and quest/curse – is not all solved by the waving of a magic wand, the baring of fangs and the sprouting of fur. Sure, it helps and gives them an edge – and this book certainly has more supernatural elements than the previous – ultimately investigation and intelligence and diligence pay off as much as woo-woo does. I appreciate this because it requires a chain of evidence, a logical storyline and some very real sense of tension and conflict because Emma and Zack cannot just pull out the magical deus ex of problem-solving and make it all go away. This seems to stretch beyond the investigation to many other aspects of the book – for example, in one of the dramatic conflicts of the book, fangs and claws certainly help, but a gun seems to be equally effective. The only magical game changer is Demeter – who is literally a goddess.

So there’s a lot of good there. We also have a nice take on Sarah, the semi-competing love interest for Zack which puts a different spin on the sadly usual jealous-dislike Sarah and Emma feel for each other.

What I do want to see a lot more of is Liz – we did get to see some more of her in this book, but I still think she could use a greater presence; she’s a good character but she doesn’t have a huge amount of “screen time”, though it (that would also help her very useful powers that were used in this book not turning her being the magical resource). Still, she is present and strongly present and I can’t say she’s entirely a background character. As a powerful witch she has a lot to add, it would also do a lot to overcome any lingering wariness I have over Sarah by having Emma’s female friend be a fully realised character – as well as add to the racial inclusion. She’s on the cusp of being a great character. There are, as well, several background POC characters among every group – there’s an Asian villain, a Black headteacher at the school and several Black and Latino federal agents. I’d also like to see some LGBT characters – there’s none in this book and we don’t have a good foundation from the last one.

I did love some of the subversion of standard tropes – with the school going teenagers there’s some poking of judging by appearances and assumptions and I love that the werewolf pack is not run by the biggest, toughest, most arseholish fighter but by a man who doesn’t look that intimidating but who is supported by the majority of his pack

I didn’t like this book as much as the first book – and I’ve referred back to that book a lot in this review because the things I like about this book are the things I loved about the first book. Those things are not present in the same large amounts – but they’re still there and they’re still good – and still bringing something original with some new slants to the genre – even while playing with so many of the tropes we know and love/hate. This doesn’t depart from the foundation of the genre – it takes it and refreshes it, lets us see it in a new light and reminds us why we loved it. And these original elements form a backbone that keeps this series intriguing and makes me extremely eager for the next book: this is new, this is fun and this is fascinating – bring it on.