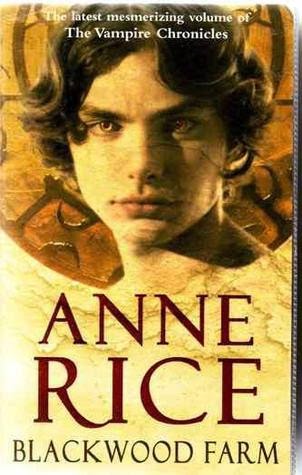 Quinn can see ghosts and has been haunted his whole life by a particular tenacious spirit. Now he has become a vampire, that spirit has turned violent and he turns to Lestat for guidance, after telling Lestat his life history. At length and in great great detail.

This book is labelled as a Vampire Chronicles novel. It has also been faintly labelled as a Mayfair Witches novel. I’ve heard it discussed as something of a cross over novel. Personally I’d call it a Mayfair Witches novel into which Lestat and Merrick have been crowbarred in with extreme force and zero elegance. If I were being less kind (yes, that was kind) I’d say it was a vast waffle of not very much with little hints of both series randomly thrown in but really not much about anything

Because like every single book in both series this book is rammed with a truly ridiculous amount of minutiae that is grossly unnecessary for anything resembling a plot. New vampire Quinn seeks to tell his story to Lestat. In that telling he covers his genealogy back 5 generations. No, really. He covers the genealogy of his servants back the same length of time as well. He even tells the genealogy of the vampires who made him who, almost immediately, decided to tell Quinn the same thing in ridiculous detail. He tells every last tiny detail about his life, so much of which is utterly irrelevant – Pops (his grandfather) having an illegitimate son? Meaningless. The bed and breakfast and the soprano he cries over that we were told about three separate times (ye gods why?) irrelevant. The fact he constantly shares a bed with elderly Black servants (ye gods why?) irrelevant. Every sexual encounter he’s ever had (why would you tell a stranger this? Why?) His first teacher and how very good she was? Really really really irrelevant. Why is this all here?

Why is this story which should have been about the ghosts that were plaguing Quinn and, perhaps, the vampires that made him and maybe the people who can see Goblin (and Rebecca – though, again, Rebecca ghost was another storyline that did nothing, went absolutely nowhere and was resolved in pointless seconds) so clogged with this much completely and utterly random backstory? Why would Quinn tell Lestat so many utterly personal secrets about himself?

And can everyone stop falling in love! I’m not even talking about Quinn seeing Mona across a restaurant and moseying over to declare that he intends to marry her (but, really? He sees a 15 year old girl across the room and wanders over to make marriage plans? What the hell? Why? Who? Where’s the damn restraining order?!) But Lestat, after hearing Quinn’s horrendous monologue declares how much he is in love with Quinn. Of course. After meeting Merrick for 5 seconds Quinn decides he loves her. Merrick probably loves him, I forget because everyone loves everyone else. Quinn loves Arion, random Greek vampire who is just kind of there because why not. They use the word “love” so often it no longer has any real meaning. I know it’s a running joke with this series but it’s actually a problem – because all of this overwrought, appallingly purple, melodramatic declarations of emotion are meaningless. All his excessive adoration of Aunt Queen and Mona means nothing because he’d use exactly the same language to describe someone he happened to be passing in the street. All of the emotional connections in this book – in this series – fall apart because they mean nothing, there is nothing special about them. True love is described in the same terms as casual acquaintance.

The characterisation is also just awful. I grudgingly accepted the ridiculously flowery, anachronistic and pure dubious language that the vampires were using as some kind of nod to their age. I even accepted it with David though there was no damn excuse. Quinn is 22. 22. Why is he calling Merrick “precious darling?” (even if she wasn’t a complete stranger?). Why is his voice exactly the same as vampires who are centuries older than him? And that voice itself is terrible, archaic and ludicrous?

And not just his voice – he kneels and kisses his great-aunt’s foot. I… I… why? He insists that some of his elderly Black servants sleep with him (not sex, just sleep). His behaviour, his choices over and over make no sense at all. And he seems to live in a weird time warp – this book was written in the 21st century, it reads like it would be old in the 80s!

It’s not just Quinn – no-one behaves in a way that makes even the remotest sense for a person. The one who stands out most for me is Patsy – the worst woman in the world. Seriously, she’s so utterly awful that it defies any description. She loathes her son on a level that would make comic book villains gasp in shock. She is slut shamed mercilessly, seriously every character may as well have just screamed “HUSSSY!” and pointed at her every time she appeared (bonus anti-choice moments with her not being able to have any children because she’d got rid of so many her “womb was weak”). It also has an added bonus of some kind of weird class shaming her for asking for money for her music career (and they even admit she’s talented! So it’s not like she’s chasing some unimaginable dream. But her music is pop and country, not classical so she’s so beneath them) And this shaming happens while the whole family is so damn rich that Aunt Queen takes a stretch limo to the shops and collects jewelled cameos… wait..

…Interrupting for a rant about the thrice damned CAMEOS. Oh dear gods I don’t believe anyone in the world, anywhere even remotely cares this much about cameos. There back to where I as…

…and Quinn takes a THREE YEAR holiday touring round Europe – but Patsy thinking her family money could be used to fund her career is just money obsessed and greedy! Clearly she should potter around doing absolutely nothing productive and living off the huge trust fund instead (a character lamented because Patsy wasn’t a proper debutant). We have awful moments like Patsy being PAID to look after her son and trying to sell a baby – it is ridiculous.

Class and the evils of women breeding follows with Terry-Sue – the poor woman who had a child by Pops and has many many kids she can’t afford because she’s poor and needs patronising and regarding with contempt all the time (it’s regarded as a great relief and good news when they hear she has an operation to be sterilised but these people who really shouldn’t have a problem).  They swoop in as saviours – deciding exactly what Terry-Sue needs (picking a house out for her, hiring servants to keep an eye on her and because she can’t be trusted to shop for herself), they’re ready to bribe her for access to the child (and it’s really blatant that they only really care about Pops’s kid). For added unsubtle-messages, Pops’s son is, of course, the one who is super intelligent and in to fine art and literature because he has the refined rich people blood in his veins,.

And the POC – they’re super happy, super devoted servants, of course (also a pattern with this series – in the past it’s happy slaves and then in the present it’s utterly devoted Black servants. Merrick is the only book that tried to challenge this narrative). And repeatedly fetishised for their skin colour – especially Jasmine who Quinn has sex with. He refers to her as: “Beloved milk-chocolate Jasmine”. No, really, he calls her “Milk Chocolate” and “Ms Café au Lait” to her face. Even Mona obsesses over Jasmine being "an octaroon." There’s an absolute obsession over their skin tone and generations of Jasmine’s family are just so joyfully serving Quinn’s family. The only Black people who aren’t happy happy servants are Merrick (whose ending is appalling) and Arion, some random vampire who drops in to tell us all about Pompeii. In depth. Really pointless depth.

When it comes to LGBT issues I’m left feeling like the author tried but ye gods no. The protagonist is bisexual and he’s also one of the first times we see an LGBT protagonist in The Vampire Chronciles actually identify as bisexual (he has some agonising over it, especially since Patsy, the worst woman in the world, uses it to attack him). This is the norm in the series, so I instantly started looking for either the much older man to seduce him, or the underaged boy for him to hone in on (also the norm in The Vampire Chronicles) but his only sexual encounter with a man is with his own clone ghost (which is less “sex with another man” and more the height of narcissism with added incest). He has sex with several women but his true love is a girl of 15. Because age of consent and The Vampire Chronicles just don’t mix. And, we must remember, despite his ridiculous speech, Quinn is actually 22 – not from some distant era of the past. Quinn also has a teacher who is gay, Nash. And Nash almost leaves when he realises Quinn is bisexual because THE SEXING MAY HAPPEN. Seriously, he stays only when he and Quinn make a pledge that nothing sexual would happen. Quinn had an apparently straight female teacher before this and no-one worried about them shagging in the corners!

On top of the under-aged, incest sexing ghost and the gay teacher who needs to make a pledge not to go for his pupils we also have an intersex character. She’s referred to as “she” (that is the pronouns everyone uses for her, I don’t believe she ever expresses a preference); she explains who she is both male and female and it was looking up. But she was also called a “hermaphrodite” and she was also the first character who explicitly showed vampires can get erections and have sex (something which has generally been pushed away and one of the reasons Louis, Lestat et al were presented as chaste) – when she rapes a man. Yes.

Oh and ole Julian’s floating around to tell us about another rape he committed way back in the day. Of course. He also protests distant cousins marrying which is either nauseating or laughable or both considering he had sex with his own sister and daughter.

So this is the LGBT inclusion. Incest ghost-shagger who wants to marry a 15 year old, gay teachers who need to run from their students and an intersex rapist. Ok. I take it back, let’s go back to that erasure thing, it’s looking a bit better now.

Under the hot mess, the terrible writing, the awful characterisation, the ridiculous dialogue and the many many things that are wrong with this book, we do have a core of a decent story. Ish. But even that is broken because it lacks any kind of tension or revelations. The book starts with Quinn, the vampire, talking about Goblin to Lestat. So throughout all this book any question of what happens to Quinn is moot because we ALREADY KNOW. Goblin? We already know. Who the mysterious stranger is in the mausoleum? We already know. Everything relevant is known before Quinn begins his terrible pre-amble. So the one, tiny, potentially redeeming element of this book is thoroughly destroyed