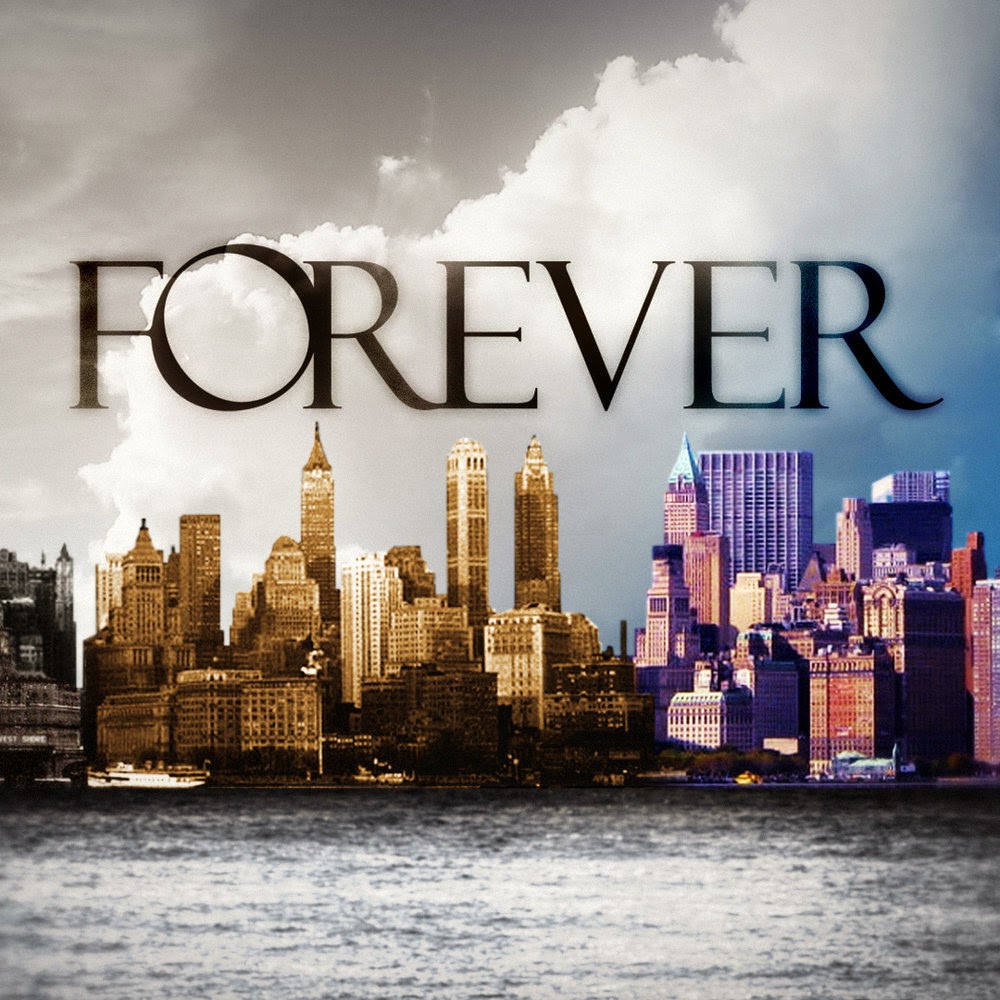 Time to meet Henry Morgan, our protagonist, with apparent Sherlock-Holmes level powers of observation which he uses to charm a fellow subway passanger. Personally I would think that this complete stranger mentioning lots of details of my life he didn’t know deeply and overwhelmingly stalkery.

Despite the stalkeriness, this gets him a date. Right until the subway train they’re in is involved in a horrific crash. Ok, that made me jump, I admit. In the aftermath while Henry’s impaled and reached for an antique watch, his voice over explains his history

Starting 200 years ago with him as a doctor on a slave ship (with the same antique watch) and him being willing to die to save a Black slave from being thrown overboard on suspicion of having cholera. They shoot him and throw his body overboard.

Which brings us to the present – every time he dies he returns, always in a body of water; and we see him swim to shore. Naked (an unfortunate downside of the immortality thing).

We follow some really clichéd musing about the curse of being immortal because everyone you love dies (and you have to walk through the city naked) and are introduced to Abe, the human taxi driver who conveniently knows the big secret and works to try and life the immortal out of the angst caused by his amazing super power.

He lives under an antique shop where he keeps a very morbid journal of the ways he died and how much each one hurt – the voice over helps remind us he regards living forever as a curse he needs to break (and the guy doesn’t even have to avoid sunlight or drink blood!)

From here we go to Detective Jo Martinez (please be more interesting!), sneaking out on a one night stand. She’s called in to investigate the subway crash and picks up Henry’s antique watch (for plot reasons) which is still working. This introduces her apparent partner/colleague, Detective Hanson and her boss, Lt Roark (no they don’t pronounce Lieutenant correctly. Beheadings for all of them).

While Henry may own/live in an antique shop he works as a pathologist at NYC Medical examiner’s office. He gets to work slicing and dicing the driver of the subway (his heart attack is suspected to be the cause of the accident) with his colleague Lucas when Detective Martinez arrives (Lucas does the clichéd nervous nerd stammer).

Henry pulls out his Sherlockobservationbullshit and comments on Jo being a recent widow (assuming she was married to a man – or at all and she’s not wearing her mother’s wedding ring round her neck to remember her, or to keep a family heirloom or any other explanation. Yes, this annoys me – and this is aside from how utterly inappropriate it is) and has a drinking problem. Leaving aside the personal comments, Henry concludes that the driver was probably poisoned (with Lucas adding how utterly infallible Henry is). He then gets a call from an ominous anonymous caller ominously telling Henry he saw him survive. Henry treats this as scary

Henry goes home and tells Abe and plans to move away, hide and outlive the ominous guy – Abe points out the flaw: Abe isn’t immortal. Henry protests he needs Abe so Abe insists they actually stay. Henry’s afraid though – since he has been experimented on (and hanged for heresy) in the past. Abe brings up how isolated and lonely Henry is – throwing in a picture of long dead lost love Abigail, to hammer home how Henry is just existing, not living. Henry finally agrees

To add to the pressure, Detective Martinez and her computer expert colleague check CCTV and see Henry get on the train.

Henry gets into work the next day to find an anonymous package containing a picture of him and his then wife, Abigail, in 1955 – who apparently had faith in Henry being immortal for a big important purpose. Co-worker Lucas also comments on how little he knows about Henry before Henry makes the leap that the anonymous caller is probably the one who caused the subway disaster – to prove Henry is immortal.

To speed up his investigations on who his stalker is, Henry injects himself with the poisoned blood of the driver (assuming the toxin is both in the blood and still potent in said blood); he dies and recognises the poison as aconite, but when Abe drives him back to the shop he finds the police – and Detective Martinez – waiting for him.

She pulls him in for questioning which he dodges before taking over the entire conversation for a lecture on aconite before launching an intellectual exercise that suggests he’s not the killer because he was the one who suggested poisoning while Detective Martinez hoped it was a heart attack. He also adds they don’t have enough evidence to hold him

Which is true – however that doesn’t mean he can go back to the body of the man he is suspected of killing and start investigating! But, yes, he does. Finding both an entry point for the injection and a finger print (which is so vulnerable to accusations of tampering since the only other person there is Lucas)

At the police station the conclusion is Henry is creepy (oh yes) but Detective Martinez defends him until Henry arrives with the finger print which they identify as belonging to a Hans Koehler. Of course she brings him with her to question him (why wouldn’t you bring a suspect along?) and he finds Hans has a whole greenhouse full of aconite (the poison which, we have to remember, Henry hasn’t actually proven is the cause of death). They also find his garage lab where Henry continually ignores Detective Martinez when she tries to get him to live.

Hans returns and Martinez tries to arrest him – but he escapes when he throws a beaker of aconite at her. Henry uses SCIENCE (and sets her hand on fire) to save her.

Lt Roark and Detective Hanson arrive, Hanson having dug up Hans’s motive (the driver was involved in the accidental death of Hans’s wife) – a motive which confuses Henry since it means he’s not linked to his curious stalker. Henry also comments further on Martinez’s apparent drinking problem.

Apparently Hans had a lot more of the drug which is missing and Henry uses his Genius to deduce he’s making it water soluble and that he plans to sue it to cause mass death in Grand Central Station (for reasons unknown, Hans decided to plan this and document this plan by drawing the ceiling of Grand Central Station. Because… reasons).

At the station Henry decides Hans will use the roof-based air conditioning because GENIUS – where they find Hans and he shoots Detective Martinez leaving Henry to try and talk Hans out of commemorating his wife’s death with an act of terrorism. Henry fights him (not really caring about being shot) – and gets shot before managing to stagger to his feet and push Hans off the roof – himself as well. The fall is fatal

Detective Martinez wakes up in hospital with Henry by her bedside trying to convince her Hans committed suicide – because Henry totally couldn’t have gone off the roof, obviously. Creepy Stalker Guy also calls Henry – suggesting that he is also immortal and can’t die, and he’s also looking to die (and how very sad it is he can’t die).

Closing montage on all the life and death he’s seen – and back to when he met Abbie and how he found Abe: a baby in the Nazi concentration camps. And Detective Martinez consulting him on her next case

Ok, first thing – I hate Sherlockian, observation powers because they’re ridiculous. A woman eating Russian chocolate is a woman eating Russian chocolate. It doesn’t mean she’s Russian – it means she likes a certain brand of chocolate! A woman with indentations from cello playing on her fingers doesn’t necessarily have a performance. She may be AWFUL and it may be a hobby! She may have showered recently because she just finished rolling around in mud which is how she gets her sexual thrills! Any of these clues could mean a plethora of things, it’s only because of the omnipotent writer controlling all their character’s experience that actually makes this kind of thing work.

And it’s still stalkery and creepy.

As to the plot – we seem to have a lot of the very very very very standard clichés of immortals that I’ve seen play out with vampires, werecreatures, gods, fae, demigods,  and Our Bernard Who’s A Bit Weird many many times over – the curse of seeing people die yadda yadda. Only without the other world building and features around those creatures – all of that is just replaced with “mystery”.

So what fills the gap? This Sherlock nonsense. In fact, the whole concept seems to be another way to have the “super brilliant but slightly antisocial guy solves things by being brilliant” following in the footsteps of Sherlock, Numbers, Lie to Me and innumerable dodgy cop shows. The immortality is just another way to justify the brilliant-man-solves-stuff trope.

Which means, while there are aspects that intrigue me, I’m not all that positive about this series.

Also note the clichéd “our guy is from the past but look he wasn’t really bad” scene with the slave ship – following in the footsteps of a gazillion Confederate vampires.