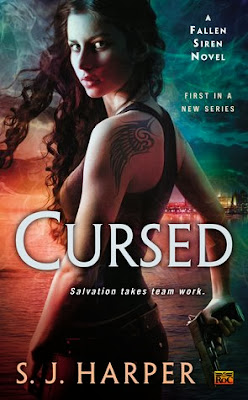 Emma is a siren, banished from Olympus by Demeter for failing to keep Persephone safe, she now must seek redemption by saving kidnapped women and girls as an FBI agent if she is to ever have any hope of returning to Olympus. And in the meantime she must avoid any romantic entanglements or risk Demeter’s spite

Which makes her new partner, Zach, who she previously had a fling with, very complicated indeed. Especially since he’s a werewolf with a difficult past and fleeing political turmoil in his pack.

But emotions aside the job calls, people are going missing, people without any apparent connection between them – it’s their job to find them, preferably alive.

The story and world are definitely appealing – Emma is a cursed Siren and we have a wonderful new take on Siren mythology (especially since siren mythology is one of those that has several different versions). Emma’s quest for redemption, without any real confidence of ever being redeemed, is a powerful one – but not one that eats up the story with angst. She seeks redemption so she gets on with her job – she’s not happy with Demeter but she isn’t going to curl up into a sobbing ball for pages of how miserable she is, but at the same time her sadness, frustration and despair is apparent.

The book is a police procedural and I know that has been done a lot in Urban Fantasy – but it works. It works because it is actually a police procedural with the law and detective work and channels and procedures to follow. “Detective” isn’t a job just used as a title to justify why the woo-woo character happens to be involved in the latest case, it actually means something. Which in turn leads to the story being compelling as Emma and Zach hunt down leads, follow up possibles actually have to interview people and work and chase dead ends and generally do police work.

It’s got a wide world that has only been hinted at but already leaves me eager for more – the different werewolf packs and politics from that, the vampire kings and their own politics. With lovely extra twists like the vampires not wanting to reveal themselves to humans because they distrust the humanity of humanity! Because human exploitation, arrogance and cruelty is such that they think it wiser to hide from them – I love that twist.

When it comes to romance there’s usually a lot of tropes going on that give me headaches – but this managed to navigate them well, much to my happy surprise.

Firstly, there’s no love at first sight or love at first woo-woo – there’s attraction that grows into more and there’s also history between them. Just the fact they have been together before, that they know each other, that they’ve worked together gives a foundation on which that attraction and emotion can actually be built upon rather than just racing to the “rawr, sexy times!”

There’s a curse preventing true love with Demeter’s wrath falling on any man she forms a meaningful relationship with. I know, I started the eye-roll – doomed relationship, curse, conflict, angst – but hold those rotating eyeballs! This actually works! It works because it is developed, it works because there’s a reason behind it and, most of all, it works because the protagonist doesn’t just ignore it! She doesn’t just say “oh I’m cursed woe woe angst angst cry me a river, I am the saddest panda of all!” and then ignore the curse until it conveniently shuffles off and goes away. She changes her behaviour because of the curse, she tries to work round it, she tries to actually end a doomed relationship. And, at the end of the book, the curse hasn’t magically vanished. This is a curse that is there for development of Emma and her relationship – not just introduced for some easy conflict and angst. It has meaning, it has a purpose it is part of the story.

And there’s a jealous ex, a violent jealous ex who hates Emma – yes, those eyes are rolling again! But no, because she is humanised, she is given a full set of motivations. Her relationship with Zack is given context and meaning. And her anger at Zack leaving has far more basis than a woman scorned – there are other consequences, other things happening with her pack and her life that are affected by Zack leaving and she’s gone out on a limb not just for herself but for her entire people. So, yes, she’s pissed at one of the main impediments to Zack coming home and sorting shit out.

I could probably sum up the romance in this book by simply saying it takes so many of those romance tropes you love to hate – and then does them RIGHT.

We had some diversity as well. While the protagonist and her love interest are both straight and white, two of the semi-important side characters are gay men. Their relationship is some of the motive behind the evil in the book, so there is an element of a destructive relationship, but it’s not the cause of the evil, merely the perpetuation of it and the evil stems from their deep emotional connection and caring not from any of the usual tropes which are, thankfully, absent. I’m not comfortable with the Siren power ensnaring a gay man, however, since mystically forcing a gay person to be attracted to the opposite sex has bad connotations and is badly used in fiction.

Emma’s best friend, Liz, is a WOC. She’s a witch who uses her witchy powers to help Emma which can be fraught territory – but she’s just one more supernatural in a sea of supernatural rather than being the super special magical helper. In fact, in terms of this story her magic could have been non-existant and the character would still have stood as a good friend of Emma’s.

And she is a good friend – which is not just surprising from a racial standpoint, but also from a gender standpoint. Far too many women in this genre are either completely alone or only have friends that exist to be side-kicks and helpers. Liz and Emma are friends. They spend time together, they have lunch together. They talk about their life troubles together – and it is “their”. Because while Emma complains about her Demeter-ness and falling for Zack, equally Liz talks out her commitment issues with her boyfriend and the fact that he is a vampire. In fact, when Liz has a crisis, Emma rushes round to talk to her – even in the middle of a case – Liz is an important enough part of Emma’s life for her to be a priority. That is depressingly rare in urban fantasy. We see no end of characters willing to drop everything to rush to the protagonist’s aid – but it’s unusual to see a protagonist willing to do the same for a friend or for the friend’s issues ever to be considered important enough to be worthy of such attention from the protagonist.

Beyond that, Emma is also extremely skilled at what she does – she’s successful, she’s a powerful witch and she’s beautiful – and beautiful in her own right rather than a “oh woe is me my friend is so much prettier than me” fashion that is, again, depressingly common in Urban Fantasy.

Which is another element of Emma that I like, she is beautiful, she is supernaturally beautiful as a Siren and she’s aware of the fact. And she tries to hide it because it gives her away as a siren which she is trying to hide. She never angsts about her looks or having to hide, she never worries about not “making the effort” nor does she make her disguise pretty – nor is she stunningly gorgeous but unaware of the fact. She wears a plain-Jane disguise and is happy with that, she doesn’t need it to be more, is irrelevant to her daily life and she’s still attractive to Zack despite it.

Emma is also competent at her job – and beyond a “I have magic powers and they do the work for me” though, obviously, they help. She’s a keen observer, which we see often in her descriptions and awareness of things around her. She’s good at reading people, she knows the law, she’s methodical, she does a lot of leg work, a lot of eliminating leads and comes up with a lot of good ideas. She’s good at her job because she is good at her job and works hard – not because of woo-woo (which helps make her truly excellent at her job).

I also like that she’s deeply ethical. I complained that her asking Zack many questions and insisting on answers is jeopardising her secret since, naturally, he feels free to ask her questions. But at the same time the questions are asked because they have ethical implications – because him doing things legally and him not being involved in shady dealings are vitally important to her.

I also like her take on the old Siren myths, remarking how history can be distorted by people’s biases and how women are used to be scapegoats for all kinds of things going wrong

This book is one of the good ones. Not because it’s so unique and different and odd – but because it is a solid Urban Fantasy. It takes so many of the elements I love about the genre and it makes them work and does them right. All of the old frustrating tropes are taken and ironed out, the clichés made realistic, the characters fleshed out, the relationships allowed to flourish.