The Volatile Amazon (Alliance of the Amazons #4) by Sandy James 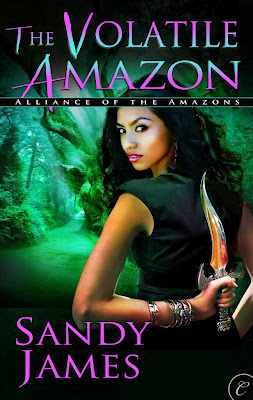 Sarita, the Water Amazon, is often considered the weakest of the four and certainly the least likely to be sent out on a mission alone. So she’s surprised when Ganga insists she goes on a mission that would normally be Becca’s field of expertise.

That’s not the first surprise – from falling into the hands of Ian who has been plaguing her dreams for weeks, but has his own plans to her – to then actually falling in love in the most unlikely circumstances, things change very quickly for her.

But they need to change – including her powers – as Helen advances her plots and becomes ever closer to destroying the Amazons – and the world with them.

Putting the romance to one side, there’s a lot to say about story and character development in this book.

This feels like the last book in the series and would be appropriate as such since each Amazon has had a book of her own. The book was perfectly written to close their ongoing story arc, deal with the big bad and end in a grand epic conflict. All the Amazons have their HEA, and the future is decided. It’s closed neatly and nicely with no unresolved threads. At the same time we have a careful nudging of that door ajar should future stories in the same world happen – along with cameo or even full appearances of the Amazons and their families. There’s a couple of storylines that could be pursued but don’t need to be –it’s a nice way to wrap up a series while still leaving the option of picking it up again.

The story also had a wonderful sense of epic. The consequences of failure were grand, emotional and extremely clear, the menace was well maintained and the fight scenes were action packed, excellently written and great fun

I also liked a lot of the character development. The goddesses have frequently been presented as vain, fickle, egotistical, petty, selfish and generally unpleasant and incapable of getting anything done. All of this is true. But this book also underscores that they do care – in their self-absorbed way – they care about humanity or they wouldn’t have created the Amazons at all. We have this displayed wonderfully and it adds some great depth to the four goddesses – and even Frejyr.

Sarita also grew well, going from a woman plagued by her insecurities about her scar and being the weakest Amazon to growing in her power and confidence, determined to be treated as an equal and be firmly respected by everyone, resisting any attempts to infantilise her. It was good to see – but unfortunately the whole “Volatile” element meant Sarita had a lot of temper tantrums storming out of the room. Even when they were justified, they were childish and not the way I would have expected her to resolve her issues, especially since we’ve seen no sign of it to date. But often her sisters had a point and their input should have been respected. It was annoying.

I do like that Sarita’s power growth was pushed by goodness. Sheer, pure hearted, goodness. I know that sounds twee, but it’s nice to see a character who is empowered through tweeness rather than being super dangerous or the child of a god or other source of immense power – Sarita is powerful because she is just such a good person. Good enough to use dark magic without being corrupted. Good enough to become the very opposite of a dark practitioner.

Where and when did Helen get her massive world wide cult from? How? And why can she actually put a hit on the Amazons, on television and the internet, without having to explain herself to some irritated police? What did she do for this cult that was so special that they were willing to perform human sacrifices for her? And if they were that devoted, why did things like age and physical attraction completely transform how devoted they were?

Why did Helen need Ian? What purpose did he serve that one her cultists couldn’t have done just as easily?

I can understand Ian having suffered what he did – but blaming Artair seems quite quite quite bemusing.

The same applies to Seior. What can Seior do? Anything.

Considering the other Ancient’s powers and abilities and knowing what Helen was planning, I find it ridiculous that none of them felt the need to intervene – and even actively prevented the Patron Goddesses from doing so.

She is held by Ian for some time. His ghostly servants are quite happy with him holding a woman prisoner and encourage her to dress nicely for him and repeatedly refer to her as a guest. Why, Sarita is almost cast as rude for not being the nicest houseguest – despite the fact she is, y’know, a kidnap victim.

Of course, as someone imprisoned by a man working for someone who wants to kill her, it also adds all kinds of nastiness to the consent issues.

I’d like to put it down to an interesting examination of Stockholm syndrome, but it really really isn’t.

Then there’s the hymen worship. I hate this trope in any romance, I hate the idea that to be a proper, identifiable romance heroine a woman needs to either be a virgin or “gently used” (minimal sex partners, all of which were deeply unsatisfactory) otherwise she is a dirty slutwhorejezebel and we cannot identify with her. We see these demonising of female sexuality turn up repeatedly that it has gone beyond a trope and is now almost a defining necessity. The vaginas must be untouched until the one-true-special-penis arrives! This series is no different. Sarita is a virgin – in her mid 20s. She joins Gina from last book who was a 26 year old virgin. And Megan from the book before was also sexually inexperienced despite the fact that the Fire Amazon is sexually passionate – it’s a defining characteristic! Since Becca was abandoned at the altar I at least suspect she had sex once – but the deep dissatisfaction is plain.

Why are all these early-to-mid 20s women virgins? Get ye to a singles bar ladies and get yourselves some! All these inexperienced women running around in romance makes me think the men are actually really bad in bed and need to pursue women who have no grounds for comparison in order to look good.

But it’s more than just Sarita being a virgin (though I could respect that Sarita being a virgin is very important to her sense of self, her identity and her cultural identity – at least if the same didn’t also coincidentally apply to Gina and Megan as well). It’s how much Ian, Sarita and just about everyone else are so damned excited by her being a virgin. Or, as they put it, she having her “innocence.” Ugh, gag, innocence? This woman fights zombies, she has been attacked by a goddess of war who she then defeated. She is a warrior dedicated to the saviour of Earth. Yet she’s an innocent, a delicate little ingénue, because she hasn’t had sex? Really? The whole putting of virginal purity on a pedestal and how wonderfully special it is permeates so many of Sarita’s interactions with Ian and I can’t help but feel she’d be a lot less special to him if someone else had got to the “deflowering” first. I think he needed a little banner “I claimed her innocence!” Which saddened Frejyr because “ a true lover of women knows when a virgin has been compromised” ew ew ew ew ew. He has virgin-dar! And he’s also obsessed by the “prize” of her “purity”.

There are some elements to the romance I like more. I like that Sarita maintained the lie while being kidnapped even when he mind was slowly turning into turgid fluff; she stayed on task and focused to her duty and to the threat she faced. I also liked the conflict that Ian faced because of that – how much of Sarita’s professed affection was a lie? But then, that would have worked better if it had been covered in more depth and before Sarita had proved her affection beyond any doubt.

I also liked him and the other men talking about watching their women going off to fight – a reversal of combat roles we see so often. Them frustrated and worried to be left with the children and not be there to help the Amazons but ultimately recognising that the Amazons are the warriors, they’re the ones with the powers which means, yes, the men have to stay behind. They’re not in a position to keep their loved one’s safe.

But there are issues unresolved – like him trying to make her eat meat when she said she was a vegetarian. Or her presenting marriage to her as an automatic rather than actually asking. He’s highhanded and dictatorial and that was never really addressed in any meaningful way.

Sarita, Ganga and Ix Chel are all Women of Colour and we get a decent amount of hints from and around Sarita for it to be more than just a cosmetic change. But every time one of these women are described the word “exotic” will appear. It’s a rule. They’re all super duper EXOTIC. This is also a continuation of the previous books.

Also, when Sarita uses her super goodness power her eyes turned blue and her hair white. I would actually be happy with, say, golden eyes and silver hair – but going blue eyed? Permanently blue eyed? She uses super magic and her dark brown Indian eyes slide toward a more traditionally Caucasian feature?

There continue to be no GBLT people in this series, but on the plus side we didn’t have the unnecessary gay jokes this book. Damned with faint praise there.

In terms of concept and characters, this book was excellent and had a whole lot of potential. But the romance, beginning with that kidnapping and that awkward love at first woo-woo shoe horned in didn’t work for me at all. Especially with all the virgin worship, creepy creepy. Then huge chunks of the story just didn’t make sense to me. It’s a shame because I think it was heading in the right direction but then it swerved, derailed and it all became a big messy crash.