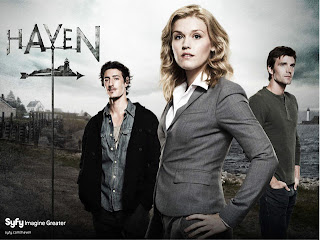 The sign tells us it’s Haven Founder’s Day coming up! And the crumbling man made of charcoal tells us that the Troubles are still going strong and there’s likely not going to be a lot of celebrating. And Nathan is still trying to find Audrey though Dwight points out that, with the crumbling human charcoal and all, he might want to put that on the back burner for a little bit.

The woman has been completely incinerated, her flesh charcoal, only her teeth and bits of metal unscathed. And the fire was oddly contained – everything around her is untouched. Dwight actually thought everyone could celebrate Founder’s Day without troubled shenanigans – this shows that Dwight is most certainly overly-optimistic.

In the morgue she’s identified by her teeth – Sally Marigold, who recently lost her brother Bill the firefighter during the meteor storm when a building burned down on him. It left his body looking awfully like Sally’s and Nathan and Dwight jump to the same Trouble in the family (or he was a firefighter caught in a burning building. Far be it from me to play Occam’s Razor on Haven – but their bodies look alike because they both burned. Do you expect them to look different?)

At the Gull, Duke and Jennifer talk to Duke’s brother Wade, who seems way more staid and organised than Duke. At least Duke didn’t have to come up with a good excuse, since the sensible brother knows better than to ask questions about Duke’s business dealings. Just in case, Jennifer isn’t stopping her meds even though Duke tells her it was all real and she isn’t schizophrenic – she’s not risking it. While Duke was gone, it also seems Vince and Dave Teague tried to buy the Gull (they are fabulously rich and own nearly everything – more mystery from those 2).

Duke runs to confront Vince who tells him they did it to try and get rid of his brother – the Guard doesn’t really want another Crocker around with Duke’s Trouble (if he kills a Troubled person, he removes the Trouble from their family – unfortunately this led to some Crockers running around stabbing people for funsies which is Frowned Upon). Duke wants to make sure the Guard doesn’t target Wade, and Vince (his tattoo magically appearing) agrees that if Wade leaves Haven only Duke will be running around with a target on his back (yes, he does enjoy upsetting Duke).

Jennifer checks in on the other Teague to hear how they cover up the Troubles, why the Troubles are a bad thing rather than nifty abilities, shows her a picture of Audrey and makes her a little more uncomfortable with his faith that Jennifer will find Audrey. No pressure there Jen.

Jennifer and Duke meet up again and Duke insists Wade has to leave, but not Jen – his excuse is that Wade can’t handle the Troubles and he recounts an anecdote when they were kids and Wade couldn’t handle Nathan (kid who couldn’t feel anything) messily injuring himself and not realising. Since Jen helped him that indicates she can at least kinda handle things.

Nathan has an even more fun job – tell Captain Marigold, fireman, that his son and daughter are dead because of a Trouble. Why pick Nathan for this job? Especially since all the firemen are very unimpressed with Nathan running away for months after the meteor storm and Captain Marigold himself blames Nathan for the Troubles still being there (it being his fault and all). MOOORE GUILT FOR YOU NATHAN!

Meanwhile a taxi driver gets all toasty as well much to the consternation of his passenger. At least Jacob there isn’t related to the Marigolds. They begin some basic police work (maybe the victims are connected! Such insight!) when Jordan strolls up to remind us all that we hate her – she’s annoyed at Dwight for risking Nathan’s life since they need him alive for Audrey to kill and end the Troubles.

When Duke goes to say goodbye to his brother he finds him drinking and not ready to drive home. He’s not going home, it seems his wife is sleeping with his builder (and he has pics to prove it), he’s going to be hanging around for a while. Oh dear.

And Jennifer goes to get coffee and everyone in the coffee shop is charcoal. All that nasty smoke cannot be good for the coffee. Time for her to prove that “handling it” thing. The crime team is called (including his new awesome snarky pathologist. Everyone needs an awesome snarky pathologist) and Nathan remarks that all the charcoal bodies look like the victims found at Pompeii. The fact that the pathologist feels the need to explain the comment to those who don’t know what Pompeii was, tells me that it’s relevant.

Nathan interviews Jennifer who is shaken (she wonders how people stay in business in Haven – lack of competition, clearly). He asks her what she remembers though she protest her meds make her memory fuzzy – she then performs a truly epic level of recall, remembering everyone in the shop, where they were, what they were wearing. She remembers 5 people – but there were only 4 victims. Linking everything up they realise the Troubled person is a firefighter.  Time to take Jennifer to point out one of the firemen – Duke isn’t thrilled with getting Jennifer involved and I bet Marigold is going to be very unhappy that they’re sending Nathan again.

Unsurprisingly, he isn’t. And he’s not co-operative, especially since they got a big honouring ceremony as part of Founder’s Day. Marigold protests that even if he is a cop, Nathan has no authority in this town. Duke comforts him by saying he never thought Nathan had authority. Awww, bless. The firefighters leave but Jennifer spots the man on a photo calendar (a photo calendar of firemen who are fully dressed? There’s something deeply wrong with this). And they learn that Don, the firefighter, worked with Bill when Bill burned; he quit after that but now is back in town for the medal ceremony.

Time for Nathan to make an EPIC LEAP of logic. In the coffee shop one of the victims was fundraising for firefighters and the taxi was decked out in objects promoting the fire service. Nathan believes that people congratulating or thanking Don for his service, making him think of Bill’s death/guilt and prompting his fiery tricks to come back. That’s a huge leap of logic there, well done Nathan, it’s worthy of Audrey at her finest!

Jordan, miffed about Nathan risking his life, goes to confront Vince – and one of her hands is bare (her Trouble is that she causes unbelievable agonising pain to anyone she touches). Vince refuses – and Jordan leaves saying she wants Vince to leave the Guard. Vince zap her! Turn her into a frog! Whatever it is you do to people, do it!

Time for Founder’s Day and Nathan’s great plan to neutralise Don is to make him really angry by arresting him – because you can’t feel guilt and anger at the same time! Apparently. Actually I thought angry guilt or guilty anger wasn’t that uncommon.

Nathan advances on the man while Dwight and the police clear the crowds. Don is co-operative, he comes with Nathan, not fighting – until someone announces the firefighter medal award ceremony over the tannoy to which Don begins freaking out and Nathan begins smouldering.  Duke and Jen arrive – and then Jordan arrives to cause problems because it’s what she does. She threatens to touch Duke, he pulls a gun.

Nathan tells Don about all the people he burned to death – this man whose power is triggered by guilt. Nathan talks him through it, talks about losing his partner as well and says lots of platitudes about guilt that probably apply to him as well (except for the difference of “power beyond your control” and “shot guy he really shouldn’t have”). Either way it works and Don doesn’t fry a small child in a “I love Have Fire Department” shirt.

Don is passed into Dwight’s hands and Duke checks up on Nathan – he has some burns on his hands. Jordan is there to stomp and attack Nathan for damning them all with the Troubles – and how Nathan doesn’t help people, he doesn’t want to help people, everything he does is for Audrey. Not entirely inaccurate but Duke protests that Nathan has been helping people since before Audrey came along. Duke also raises the fact that Audrey may not have come back because she may have lost her memory. Jennifer also learns Nathan’s Trouble – and has a moment with Duke discussing how important Audrey is, how she helps the Troubled – and she throws away her pills.

Duke’s more mundane trouble is that Wade is staying in Haven and wants to have some family bonding time since he’d always been closer to their mother and Duke to their father (which Duke considers all to Wade’s advantage considering their dad). Which he loudly mentions to the whole bar – overheard by Vince and the Guard.

Over to Audrey/Lexi at the bar in parts unknown with William trying to explain everything to Lexi in a way that doesn’t make him seem all kinds of dangerous and creepy. She tells him her memories of getting to the bar and he tries to convince her they’re not real; eventually he falls back on emotion. She’s in love, she feels love but she doesn’t know who for – she loves someone she hasn’t met. When he says that her patience snaps and she tells him to leave.

Of course he doesn’t but Lexi doesn’t trust him – pointing out he’s carrying a gun (um… maybe because of the guy who tried to kidnap you yesterday, at gun point?) He tries reassuring her by disarming and dismantling the gun in front of her – reassuring displays of gun skills! She tells him to leave she doesn’t believe him – which is when her attempted kidnapper from last episode arrives only this time he’s brought the Hulk with him.

The men make William go with them or they start hurting him or Audrey. William agrees to go with them, telling them she still thinks she’s a bartender. Audrey appeals to the crowd but everyone ignores them. As William is led out, Audrey grabs the gun, rapidly assembles it and fires a warning shot. She drives the kidnappers out of the bar with some very accurate and intimidating shooting. When they leave, Audrey asks William how she did that – last episode she said she’d never even seen a gun before.

Ok, Audrey kills the person she loves and everything is fixed (or we move to the next stage). And up pops William – I think Nathan may be safe. Sacrificial love interest ahoy!

Nathan needs to work on his angry serious voice – it sounds like he’s an extra in a Film Noir. Or that he has a respiratory infection.

Nathan logic leap – ah Haven. It never changes. It’s one of those shows that is truly excellent at taking a few shreds of clues and then leaping to a completely random conclusion.

I want to know less about Haven and more about Audrey! Who are these people? Who is William!? Whyyyy?