The Almighty Johnsons, Season 3, Episode 13: The End of the World As We Know It 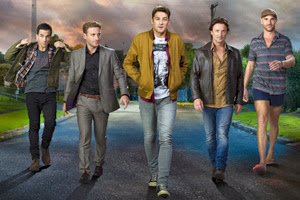