Walking in the Midst of Fire (Remy Chandler #6) by Thomas E. Sniegoski 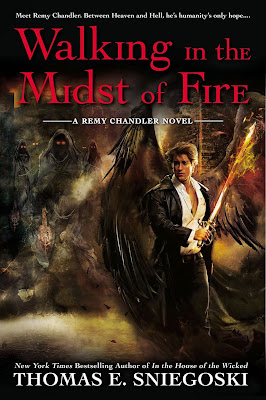 Remy Chandler has a new case – an Angelic General has been murdered. Apart from anything else, killing a powerful angel isn’t exactly an easy task. But more worrisome, if he doesn’t find out who did it, Heaven’s not going to look they’re just going to point fingers at the newly released Lucifer.

Which will mean war. And it doesn’t matter who wins a war between Heaven or Hell, Earth will be reduced to cinders in the process.

But in searching for the real murderer, Remy is involved in the convoluted plotting of an ancient figure from his past and has to make some very hard moral decisions. Especially since the angels and the fallen are not all that different from each other

I love how this book is written. In every scene we have some excellent description – but not too much. We havbe action that flows perfectly with blood-fizzing excitement without glossing over what’s actually happening. We have an amazing sense of epic – and this series needs the epic. The protagonist is a seraphim who is frequently fighting to save the world from the indifferent forces of Heaven and Hell – it needs epic. It needs lots and lots of epic. And it delivers – it’s one of those books that can very much be on-the-edge-of-your-seat reading.

Beyond the epic, this book also has some really impactful emotional scenes. It has some utterly tragic scenes, some really painful scenes and a whole lot of enraging scenes as well. I think it’s a mark of excellent writing and character development if you can well and truly loathe one of the characters (that is, if the character is written to be loathesome, anyway. I’ve read a few books where I’ve loathed the protagonist and I’m pretty sure that was unintended) because it means you’re so emotionally invested in the characters and the story that you can feel rage for the wrongs perpetuated.

This has that in spades – Remy is such a real character, such a human character (ironic, because he’s an angel) that he’s easy to connect to. His compassion, his honour, his emotion and his goodness are really powerful forces throughout the book which, along with the heavy amount of epicness in the story, makes me really want to get behind him. At the same time he’s very practical, he knows what compromises to make and what people to tolerate – even while, at the same time, having firm lines he will not cross under any circumstances. It’s an excellent balance of practicality with hard moral limits.

He also has some excellent interactions with other characters to really flesh them out and humanise them even if they don’t have much time on the page. His still apparent grief over his ex-wife, his fun relationship with Linda with both his doubts and the excellent bond and banter between them. His friendship with Mulvehill, his contact with Francis – it’s all very real

And they’re developed in their own right – seeing Mulvehill come to terms with the supernatural world is a powerful storyline of self-growth, discovery and determination. Seeing Francis, Mentagin, Squire and Heath together made for some awesome comic relief while still developing these relatively unpleasant characters – while still have the strength of Francis’s journey and underlying development – the fallen angel who isn’t sure what is right or what he should do.

There’s some wonderful development of the already incredible world building but – again – it’s so well written that we get all this new information without infodumping or it being awkward or convoluted – it works. If anything I will say it’s a little sparse in explaining the whole concept of the guardian of light magic and the guardian of dark magic – we needed more explanation as to what they actually were and how they came about. I did like that the white magic guardian was the actual aggressor. We also got some excellent development of the demons – both their origin and their actual legitimate grievance even if it doesn’t make them any less evil. It makes them evil for a reason – an understandable reason – rather than just “rawr, demons.”

The angels are terrifying and, again, further developed with their utter contempt oozing from every pore – and I love the idea that our world, with all its myriad temptations and joys, slowly drags angels down into “sin” – and because I love the idea of an Angelic general of heaven playing computer games. There’s just so many little additions to the world here that add so much depth and texture – all of which are discovered as part of the mystery. It means we don’t just have a detective mystery with woo-woo thrown in – the woo-woo permeates every last element of the story. In fact, finding the truth is such a low priority to everyone – ending the war, saving the world, that is always what counts and the constant presence of the divine reinforces that and stops it ever becoming a simple murder mystery novel.

I also liked that events from past books are casting shadows on this one. Characters are returning, even casual things Remy did in the past now have consequences, he has old enemies, old vendettas haunting him – it makes the series more of a continuation rather than each book sharply delineated.

And on the downside… this book is unbearably straight, white and male. I think everyone is straight and white and the women in the book play such minor roles. I love Linda and I love that she stepped up when a fight happened rather than hiding in the corner, but she spends the rest of the story in the background. Other than her we have Nephilim sex workers who are sex workers because they can be abused and heal easily and the angelic servants – who are predominantly female and all blind. Apparently being blind makes you super-sensitive to the divine which is an awkward trope to decide blind people have special woo-woo senses especially when being sensitive to the divine means you get to be their regularly abused maid.

There’s a pretty large cast here between the angels and demons, the Nephilim, the kids, the Forever Man, the Vatican, the 4 stooges running around distracting the angels – and it’s glaringly lacking in diversity.

It’s a blight in what otherwise would be an absolutely perfect book and part of an absolutely awesome series. Remy Chandler’s stories remain one of those series where when the next book comes out I simply have to have it. It’s one of my desert island series and one that I highly recommend – the action, the writing, the characters and the sheer power of the series always holds me riveted. But with its large cast it needs to mix up the diversity a little more – we’ve seen it do better in the past, but that needs to be maintained.