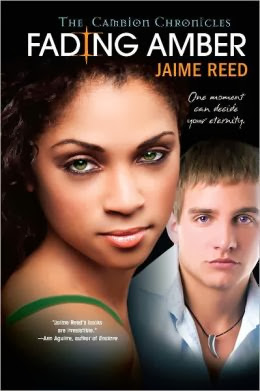 Sam wakes up at home to find her Cambion, Lillith, freaking out and a massive gap in her memories and a note from Lillith asking her to not poke at the gap and just accept the missing time.

Lillith really should know Sam better than that.

Still Sam has a lot on her mind – there’s her continued complicated relationship with Caleb, the investigation by the Santiago family of Cambions that could see Caleb dead (and their investigator entering a relationship with her mother), her best friend is still on the outs with her and Angie, another Cambion family head, is coming to visit from Poland.

This concludes, neatly, the Cambion story – it’s always good to see a series ending that actually addresses all points and closes all doors, especially one that does it as well as this.

There were a few elements that I generally find irritating with teenaged protagonists – like Sam and Caleb running off on their own to solve their Tobias problem despite everything at stake and Sam’s mother deciding if she puts her foot down she can make everything go away. But on the former case we actually have a very good reason for their secrecy – since the Cambion families are quite happy to accept some collateral damage that is personally unacceptable to Sam. And, in the latter case, Sam’s mother can be talked round and made to see sense (kind of) beyond her initial panicked reaction.

The story itself was decently well paced. The whole memory lapse lead me to be a little confused at the beginning – but it all flowed well from there. There was a constant quest to figure out what had actually happened in that gap in Sam’s memories – as well as trying to fend off attack from the Santiago family, as well as exploring her relationship with Caleb and what she actually wants to do with that and further meeting Angie and getting on with life. We have a lot happening there but it’s all balanced – I like the way that no one event completely consumes Sam’s life, that she can’t put everything on hold and focus on one element. In fact, better than that, Sam refuses to put everything on hold and focus on one element. She has other things to do, other worries, other concerns.

I love Sam and Caleb’s relationship because Sam is so sensible about it. She doesn’t let emotions or hormones overwhelm her common sense. She finds Caleb extremely attractive (more so with their Cambions fighting to get closer) but doesn’t let that overrule all logic. There’s a wonderful line where she’s trying to lecture Caleb on him feeding too much and putting them all at risk and he has a tangent about how he hurts everyone and woe is him to which she responds:


“Uh-huh that’s nice. Back to feeding,” I began, refusing to join his pity party.

I applauded. I applauded my tablet and I’m not even ashamed to admit it.

One defining moment for me in the romance is when Sam finally said “I love you” to Caleb. It wasn’t after they had hawt sex. It wasn’t after drooling over his body. It wasn’t after lots of mushy declarations of love. It was because he got her a present that wasn’t only thoughtful and loving, but supported her career aspirations and dreams. She loved him in the moment because she realised he supported her and believed in her ambition. And how excellent is that?

The depiction of women is similarly made excellent by Sam’s awesomeness, her determination, her agency, her stubbornness, her refusal to be sheltered or protected and generally her taking the reigns and leading her story – and being backed by her mother (another strong determined character) and Angie who is well and truly awesome, both strong enough to unleash epic death threats and wise enough to recognise them as unhelpful. We do have a moment with Sam and Olivia striking sparks, but it fades and is, to an extent, based on very reasonable resentment; after all Olivia was Nadine’s sister – having Nadine dead and her spirit now residing in Sam is going to be a bitter pill to swallow. Sam is mature enough and sensible enough to recognise that.

The only downside there is the idea that Cambions are hated by members of their own gender just as they are irresistible to the opposite gender. This seemed to arise only when Sam became a Cambion  - we still don’t see Caleb (or any male Cambion) having anything like the same experience.

The protagonist of this book is a Black woman and she is written awesomely. Being Black is a part of her identity and culture – including her family. It’s something that is always part of the character without ever her having to sit down and have an “oh by the way, I’m Black!” speech – she’s a fully authentic character; not for woo-woo, not a brief description in the beginning with no other markers. It’s an excellent depiction, it adds to her already excellent characterisation and it’s just so depressingly rare to have such an awesomely well rounded, perfectly depicted WOC as the protagonist in a story.

Unfortunately there are no GBLT characters in this book – or, indeed, the whole trilogy, despite a really huge cast of characters. Worse, the whole concept of the Cambions is gender essentialist and extremely heteronormative; we even have a scene in this book where it is implied that a Cambion can become damaged or ill by feeding off sexual energy of the same gender – considering the prevalent homophobic meme of gay people as mentally ill, sick and/or diseased this whole concept is beyond problematic. But we do get our first reference to GBLT people – a swanky hotel has an openly gay concierge. Apparently. How Sam knows he is openly gay or how this relates to the hotel’s swankiness remains a deep mystery (unless I inject some reality and assume the author is relying on a lot of gross stereotyping).  Really if you’re going to erase then go the whole hog - sprinkling in this nasty homophobia is just rubbing salt in the wounds.

At the end, this trilogy did an excellent job of taking so many of the tropes we see so often in paranormal YA, and subvert them. Or, even better, not subvert them but do them right – the characters made them work. And they made them work because the characters are solid, very real and incredibly well written and drive an excellent, tightly written, very focused story