The Walking Dead Volume 18: What Comes After 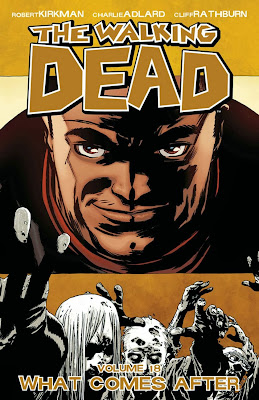 This volume we saw a lot more of Negan and how he runs the Saviours. We saw how he is almost a cult-like figure, demanding obeisence from his followers. In many ways we saw how he was different from Governor - or perhaps how he is the next step the Governor would have to take. The Governor was brutal and dominating - but he didn’t need a cult of personality and elaborate speeches about how he was a saviour, nor did he need a harem. But then, the Governor didn’t need to control and intimidate nearly as many people as Negan did.


In some ways a lot of this volume was padding in the same way the Governor’s rape of Michonne was an unnecessary insert. We had numerous scenes that existed to just prove to us that Negan was a bad guy - something that had already been made abundantly clear. We didn’t need him to threaten the women of Alexandria with rape, when we’d already seen him with his harem - or with him torturing men (and, by extension, his harem) with a red hot iron. Negan was a bad guy. Negan is a bad guy who likes the sound of his own voice. It is clear, we don’t need to belabor the point.


One thing that did stand out though was the vulnerability of women. While we think female victimhood is an overplayed trope in just about every media out there, at the same time it is worth noting that in a dystopian - or any situation where order breaks down - women are likely to be among the most vulnerable and that needs to be shown as well in a way that isn’t gratuitous.


As ever when we have a big bad, it’s natural to draw comparisons with other leaders - particularly Rick. What struck me was that, even though Rick is maintaining a sense of being submissive to Negan (insofar as he can manage to do so), but if anything he becomes more dictatorial. He openly threatens to kick people out of Alexandria to compel obedience. Perhaps that can be seen as understandable given the threat they faced, but Rick also made this entire plan on his own. He included Jesus because he had to. He included Andrea because she was going to walk out on him. Again, there is some excuse for him keeping most of the community in the dark - but Andrea and Michonne? Surely they deserved to be included in the plan.


Perhaps the most interesting character is Carl. Carl’s childhood has been left behind almost completely, Rick barely treats his son as a child and when he does it seems almost to be naive and silly on Rick’s part, rather than the natural way you would treat a 12 year old. Andrea doesn’t seem to include him in her chewing out Rick for failing to protect the children and Michonne even takes him beyond the wall to fight Walkers on what looks like an ordinary patrol. The group has started treating Carl like an adult.


But Carl’s evolution is more than just child to adult before his time - Carl stares down Negan, Carl hunts Negan down with a gun and kills 6 of the Saviours - along with Ben and Shane, that means he has killed more living people than many of the cast and that’s quite aside from zombies. Negan respects Carl, Negan is even a little scared of Carl. We have to ask - is Carl becoming adult before his time? Or is he becoming a monster?


The moments when the child peeks through - when Negan insults his eye scar or when Michonne comforts him for nearly being killed by a zombie on his blind side, seem almost alien parts of the character now, aberrations in the angry, lethal person he is. It makes me wonder, what will happen to Carl and what will he become?


I am curious about Ezekiel and the Kingdom. At the moment he seems… eccentric. But it remains to be seen how that will develop. It is rather telling that Ezekiel is the first stand alone leader of colour that we have met and he is virtually a trope from the outset.  If anything, his demeanour screams a touch of wise negro and that is very uncomfortable. Further, in a post apocalyptic world racism would very much be a part of his life and so it really needs to be explained who he came to rule over all of these White people. This is not to say that a Black man is not fit to lead but that a Black leader would have very different issues from those faces by the White leaders we have been introduced to thus far. If they don’t take this journey, all they will have done is to create yet another empty character like Michonne with a little bit of eccentricity thrown in like seasoning salt.


I don’t know about you, but I was wondering how long it would take Michonne to discover Heath. It seems to me that the moment a Black man becomes a part of the group, she determines him hers. On one hand, it’s a great thing that Michonne is completely in control of her sexual urges and experiences no shame for being sexual, or wanting to be sexual, but I have to question the fact that the White men who are writing this story seem to be extremely uncomfortable with Michonne exploring inter racial options. It is further telling that in each instance in which Michonne has been sexual, it has been initiated by her. Sure we can put a positive spin on this and say that this is empowering her sexuality, but why aren’t we questioning that Michonne is always the aggressor and the men appear to be hopelessly caught in her web.Why aren’t men openly desirous of Michonne, but yet seem to have sexual attraction naturally for Andrea, Maggie, Rosita (who was quickly supplanted by a white woman) and Carol? In Heath’s rejection of Michonne, he explicitly paints her as a jezebel and a sapphire - two racist characterisations, which have become associated with Black women, to explain his lack of interest. He actively slut shames Michonne and suggests that she has no respect for herself.  This is how the writers really see Michonne and it is my guess that this is why she is not worthy of romance or true tenderness - she’s the walking archetype of all the negative tropes that are associated with Black womanhood.


In the face of the ugliness of Heath’s rejection, all Michonne had to say was, “this never happened,” as though this could somehow erase what occurred.  Michonne didn’t get angry, Michonne didn’t cry, Michone resigned herself to Heath’s view of her. Michonne retreated and bemoaned her lack of openness and talked  about how very different she used to be. In each and every opportunity that the writers have had to grow Michonne’s character, they have steadfastly refused to do so to the equal depth of the other characters. It’s a cheap device to use Michonne’s PTSD in this fashion when we consider that all of the characters are living in the same world and somehow manage to be able to function, and have relationships.  Why is this character a fan favourite when the writers have invested so little in her?