Impetuous Amazon (Alliance of the Amazons #2) by Sandy James 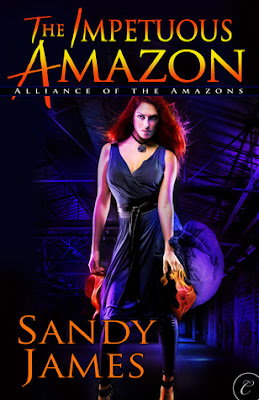 Megan is the Fire Amazon – passionate, impetuous, short tempered and driven, she is all that is fire.

Unfortunately, all that is fire doesn’t include controlled, subtle or, necessarily wise and careful. And she’s been making mistakes – mistakes that involve killing monsters in public in full view of everyone and their mobile phones. And her emotions are volatile enough that she has a habit of sparking – and setting fire to things.

The goddesses have had enough – with only Frejya in her corner, the Sentinel Johann has been sent to Megan to see whether she can learn to control herself, or whether she is too much of a liability and needs to be stripped of her powers entirely. During the course of a mission to find missing girls, it’s his job to assess her, train her and decide what to do with her.

Of course, that would be easier if their mutual passion wasn’t lighting some more sparks – or if the missing person’s case wasn’t far more dangerous and involved than was originally imagined.

I like that the consequences of the last book are carried on to this one – and not just the obvious like the enemies and Rebecca having babies – but things like their training being cut short and Megan not having a full understanding of her powers or her role. Megan’s constant attempts to ensure that she is what a fire should be is a major theme – she is playing a role, an act many times. There’s a lot of fire in her – she is, after all, the fire amazon but she’s unsure enough in the role that she feels she has to put on extra behaviour, to fake it.

This, coupled with an extra analysis of her back story both with the police and before as a child really fleshes out the character and adds a lot of nuance. Her firm morality and need to protect, her fierce independence and resentment of any kind of interference or even team effort. She’s a really well realised and well developed character.

The story itself was fairly moderate – it’s not much of a mystery or investigation but it’s more about Johann and Megan than anything else. It works, it keeps the pacing enough not to be boring and not to completely fall down the romance trap and the ending keeps the epic forces of the world well established with a high sense of both the consequences of failure as well as the power of the various actors. I definitely want to see more from the various Ancients that populate the world and what each of them are up to.

I think there are times when the plot does fall by the wayside, especially considering how desperate to act Megan is to save these girls. At times I felt they should have been doing something rather than waiting or poking each other/their relationship – especially since there was almost a hiatus in the middle for a Big Reveal and angsty fallout. I felt that maybe some of the other amazons should have joined earlier when the scale of what they were fighting became apparent.

This book also goes a long way to challenging a lot of the gender issues I had with Reluctant Amazon, but that could be as much because Artair is a much more minor character as anything – and Megan just doesn’t have as much respect/awe/fear of Johann as she does Artair. Still, I like it – because the whole idea that the Amazons are led by a man irks me still. And Johann is there to teach, train and correct Megan which means lots of instruction, chiding and scolding – though not without Megan challenging and objecting furiously. I do wish Megan acted a little more sensibly.

Megan is unwilling to let Johann just give her orders and she objects strenuously to them all being referred to as “girls”. We also have Rebecca, as Guardian of the Amazons, taking a much stronger leadership and influence role with the Amazons which works so much better. We also have an excellent reference to her time working with the police and her ubermacho partner who ended up killing a kid because he wouldn’t listen to her.

The goddesses – they are petty and mean and spiteful – and they’re frequently referred to as “catty”. I would prefer different language used but I am more comfortable with the depiction now we have other challenges because if you look at a lot of ancient Celtic, Norse, Greco-Roman mythology… well petty, mean and spiteful is pretty accurate.

Being a paranormal romance there are, unfortunately, some tropes. Firstly, despite emphasising how passionate and sexual fire usually is, Megan isn’t – because paranormal romance does not like heroines who are more than “gently used”.  We have moments where Megan explodes in anger with relatively minor provocation (she also has plenty of more reasonable anger moments) and Johann explodes with supreme anger at the big reveal and it feels a trifle convoluted – but I think that’s more from not setting up the attitudes among the amazons sufficiently, their prejudices and assumptions that would justify such a reaction. Megan has her tearful/comforted moments and we do have a rescue scene as well. Of course, we do have a lot of “does he love me? Does she love me? I know I have magical proof, but does she REALLY?!”

As far as paranormal romance tropes go, they’re in a much milder form than usual – I’ve certainly seen far worse and they only mildly irritated me rather than annoyed me. What did annoy me was the big bad and his terrible hypnotism sexy power and how that made Megan so weak and the jealous Johann riding to the rescue – it felt both very weakening for her and it conflated evil antagonist with jealousy.

We do have POC – Sarita (an amazon), Ix Chel and Ganga (2 of the goddesses). But Sarita and Gina are two amazons who we haven’t focused on (though I will bet books 3 and 4 will) and we rarely see Ganga and Ix Chel – it’s always Rhiannon and Frejya who seem to be the most powerful goddesses as well. They need to step forward more – at least their silence makes them seem more mature. But the book needs to drop the word “exotic” all the time. The big bad is heavily implied to be a POC and there’s an unpleasant line directly comparing him to Johann and it’s very “good/bad light/dark” which has Unfortunate Implications.

All in all I think the book is a step up since it fleshed out the characters to something more developed and much more real, it expanded on a wide and wonderful world and let us settle in it a little more and addressed some of the gender concerns of the first book – by omission if nothing else. It’s a step up, not a leap but it’s heading in the right direction.