The Grimoire of the Lamb (The Iron Druid Chronicles, #0.4) 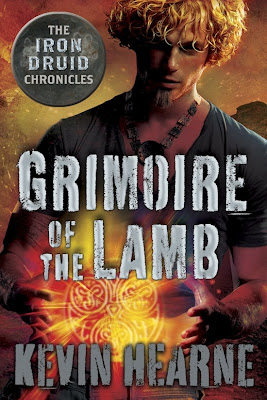 Okay to start this review, I feel it necessary to give full disclosure that I am totally a Kevin Hearne fanpoodle.  This means that this review will probably just consist of the obligatory fanpoodling that happens when one of a readers favourite author released a new book.  Lucky for you, The Grimoire of the Lamb is a novella so that means you won't have to tolerate much of my poodling.

The Grimoire of the Lamb is set four years before the events of Hounded.  This means that  while we still get Atticus and Oberon having an epic adventure in Egypt, Granuaile is missing.  It all begins when a man from Egypt calls with the hope of purchasing one of Atticus' rare books. Nkosi Elkhashab is desperate to get his hand on the a grimoire, which appears to have nothing but recipes for cooking lamb, but Atticus decides that there has to be more to Elkhashab's desire than ancient culinary delights and does some research. When he learns that the grimoire contains 13 spells, which Elkhashab wants to use to "restore Egypt to its rightful place as supreme among the world," Atticus realises that no matter what happens, Elkhashab must not be allowed to possess it.

When Elkhashab manages to undo Atticus' magic and escape to Egypt, Atticus and Oberon have no choice but to follow.  Like every other pantheon,  Atticus is not exactly very friendly with the Gods.  Before Atticus can even deal with Elkhashab, he must find a way to make peace with the goddess Bast, whose holy book he stole centuries ago.

Once again, Hearne's writing is laugh out loud funny.  Atticus and Oberon have become so familiar, starting one of Hearne's books is like meeting an old friend. If I had not read any of Hearne's previous works I might well have found the character of Elkhashab and Atticus' commentary regarding Egyptian Gods offensive; however, when put into persepctive of how Hearne has written about the various pantheons which Hearne has had Atticus interact with, I find the treatment to be equal.  It is still however a little sad that the only inclusion of POC in this novella were as antagonists. Similarly, women had a very small role to play as well, but given that The Grimoire of the Lamb is a novella, exceptions should most certainly be made.

If you are a fan of The Iron Druid Chronicles, I think you will like this novella.  I could have done with a little less of the big epic battle at the end but it was worth for the epic chase between Oberon, Atticus and raging cats.  Anyone who has ever had a pet cat, can probably visualize this quite well because no matter how much you may love your cat, at some point you have called a cat an asshole because well, they can be.  There is something about cats which never becomes completely tame no matter how spoiled or domesticated they are.

The Grimoire of the Lamb is a quick read, which is exactly what a novella should be.  There is enough of a story for first time readers of the series to follow along, while still interesting long time readers.  Like everything else Kevin Hearne, I think that there is a little something in this story for everyone.