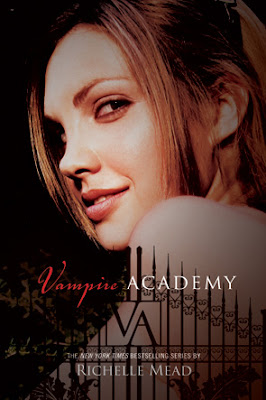 The first book that is, not the series (though I will return to that and maybe touch on the other books in passing).

In fact looking over the series I have to say that this is bizarre reverse world. Normally an author writes their awful, unreadable road-block of a book towards the end of a series, after the series already has enough fans who will suffer through it to keep going no matter what. Start with a great book, then go down hill while the fans clutch on desperate for improvement but masochistically holding on hoping, praying with each new book that there will be redemption and not further plummeting into the abyss (I call this the “Laurell K Hamilton writing style”).

But Vampire Academy flips it. The first book, well, I have to say was painful for me to read. It was dull dull dull dull. Ye gods it was dull. Full of pointless angst and slut shaming and completely lacking anything resembling depth or nuance.

However, if you hold on past this insomnia cure of a book, the second and third books are not nearly so painful. It’s a shame really that the first book is such a damn road block.

It’s possible that I’m being unduly harsh and my tastes just don’t match up with this genre.

Lissa is a Moroi (kind of a good vampire with magic) and Rose is a dhampire (half-vamp, child of a Moroi and a dhampire or a human – no magic but physically stronger than humans and the frail Moroi). Many dhampire are guardians of the Moroi, dedicating their lives, even sacrificing their lives to protect Moroi from the Strigoi – Moroi who have gone to the darkside, undead without magic but physically immensely powerful, they feed by killing and love to nom on Moroi becauseeating them gives them a power boost.
Sounds nicely epic? Yes, it does to me too – and the world setting is fascinating and I want to see it develop and see more

But for now you have to put all that in the “we’ll get back to that” box because rose and Lissa are in school – all Moroi (and Guardians to be) seem to attend boarding schools. And, frankly, the plot could just as easily have been a lot of humans. For the next, I dunno, 70% of the book? Maybe 80%? We have a highschool drama

Lissa and Rose have an arch-nemesis Mia and we are treated to chapter upon chapter of their petty little high school feud. She hates her and she hates her and she is popular but not her. Then she steals her boyfriend! But not really because she’s not actually into him but she steals him back anyway because he’s DEVOTED. And then she uses her whiles to get this boy to do what she wants and she spreads a nasty rumour about who she’s sleeping with then she sleeps with some guys to make them spread nasty rumours and she finds out about that and spreads nasty rumours about her sleeping with guys and she spreads nasty rumours about her family and… y’know I can’t even PRETEND to care.

Seriously, most of the book is this teenage drama. And, I have to confess, I hate teenage drama, so that could be why I hated this book so much. Those who love teenage drama and highschool politics may love this book. They may also need side-eyeing because people actually like highschool sniping?

Anyway, there are, throughout the books between the teen-aged angst, snark and sniping foreshadowings of actual plot and Lissa’s special powers, unlike any other Moroi. But really, most of the book is more teenagers hurting each other, plotting how to hurt each other etc etc *snoooore*

And then we reach, by my kindle, 80% of the way in. AND STUFF HAPPENS. Actual EXCITING relevant stuff! It’s like getting a gulp of espresso after sipping insipid green tea (I hate that stuff) all day!

And all those foreshadowings now matter, all those highschool dramas are irrelevant and there’s action and magic and the Moro are now more than just teen-aged girls fighting to see who is Most Popular of them All. We see Moroi society and REAL politics that MATTER and it’s all relevant (so much so that I can’t reveal much without spoilering). And suddenly, in that last 20%, it becomes a good book.

Which makes me shake my head – this book feels like 80% prologue, 20% story – and that story’s good – but it could have poked its head up a little sooner. In short, the pacing is awful.

Lissa doesn’t really appeal to me – she’s a vary passive character, a very shallow character, I think she gets developed better in later books but in many ways the odd splashes of depth she gets seem less like development of character and more like out of character

Rose is much more deep and conflicted with powerful emotions and drives and a personality that gets more complex as the books go on. But she has zero impulse control and a ridiculously short temper – somewhat explained in the books – but it’s a character trope I loathe. Let’s have a strong female character – and how do we make her strong? By making her violent, angry and almost incapable of controlling either. It irritates.

And I have to address something else in these books – the slut shaming and the shaming of everyone beneath the Moroi.

Humans who the Moroi feed on are called “feeders” they are addicted to the bite. Despite their dependence on this humans for survival, there is nothing but contempt shown to them by the Moroi.

A Dhampire who allows a Moroi to bite them is called a “blood whore” and yes, that’s as shaming as it sounds. They’re considered low and perverse and contemptible. Worse is the treatment of most Dhampire women who are not Guardians. Dhampires cannot reproduce, they have to breed with a Moroi to have kids. Moroi women don’t want to have Dhampire kids, would much rather have Moroi children – but Moroi men go to communities of Dhampire women (most of the Dhampire men and some Dhampire women become Guardians, self-sacrificing soldiers living to protect Moroi) for easy sex – and leave single mothers behind. Moroi then shame these Dhampire women as “sluts” and “Blood Whores” - yet without these single-mothers the Dhampire, including the Moroi’s protectors – would die out.

I find this tropes beyond distasteful but fall short of condemning them because it feels like in later books they will be exposed and fought against as part of the rot that exists in Moroi society. Or I hope so – it has foreshadowing of depth and nuance to come (or maybe I’m naïve).

Less forgiven is the slut-shaming in the school. A good half of the rumours Rose, Lissa and Mia use against each other involve who is having sex with who – and shammmmmme on the girls for having sex. It’s old, it’s been done and it never fails to leave a foul taste in the mouth.

I continued and continue reading the series for it’s potential. And it DOES pick up from here considerably – but the first book is a road block you have to battle over to try and reach the actual story – it’s a bad way to start a series.