Blessed by a Demon's Mark (Kat Richardson #3) by E.S. Moore 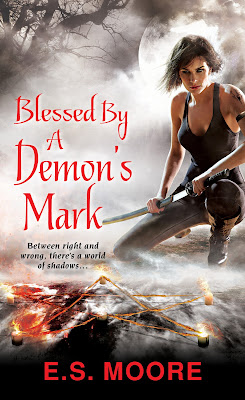 Kat has found some measure of peace in the strange town of Delai, even if things seem so very strange there. But she can’t remain – she made a deal with a demon to return and that demon is now using his mark to reel her in. With no choice she leaves her unusual haven, even though it feels more like an escape than leaving, and her old life with all its chaos and its pain rushes back in.

Ethan, in her absence has cemented even stronger ties with the Luna Cult. Worse, in her absence one of her brother’s murders has been pinned on her – and a powerful vampire countess has Kat in her sights – just as she is getting more people she cares about, more people who are vulnerable to being used and hurt to make her obey.

Then there’s Adrian, the Luna Cult rebels determined to drag Kat into their plans; the Left Hand of God is back in town, killing vampires and things remain eternally complicated between Kat and Jonathon. It’s almost enough to drive her back to Delai – until the demon shows her the truth about her erstwhile haven.

I think there’s probably one storyline too many in this book. or possible two or three too many. We have Kat’s ongoing issues with the demon, we have the revelations of Delai and what Levi is actually up tp. We have some unresolved issues with Adrian the rebel Luna Cult dragging Kat into her schemes. And then we have the evil conniving plots of the vampire countess who is gunning for Kat. We even have another vampire count that Kat pissed off for shits and giggles. There’s even the human hunters back for more killing and complications

That’s a lot of issues to deal with. I think part of that is intended as a way of showing how overwhelmed Kat is and to drive home the theme of the book which is Kat being pulled in too many directions with too many people having a hold on her. Still, I’m not sure if the return to Delai couldn’t have been handled in a later book, or Adrian pulled his grand plan in the next book. There’s just so many of these different threads that they distract each other and sometimes feel forgotten – I forgot Adrian was even looking for Kat until near the end of the book.

There wasn’t anything resolved in this book either. Now I love meta, meta is what keeps me plugged into a story, but it’s rare that a book can be nothing but meta; you usually have some sub-chapter of the book being concluded and there wasn’t one here

Still, the stories that are presented are great fun with lots of devious plotting I enjoy. I love the demon’s manipulations, Delai and its revelations are definitely intriguing and we all knew there was something sinister underlying it. I really want to know exactly who and what Adrian is and what he is plotting – I’d also kind of like to know why Jonathon tolerates Kat all things considered and if he has his own agenda. The ongoing theme of Kat becoming more and more beholden to more people, each of them having a lever against her is really well done as well – and shows how much her friends and loved ones are a weakness to her and leave her open to this manipulation.

Throw in some excellently well written fight scenes and a splash of gruesome horror and there’s some very fun moments in this book.

Unfortunately, this is the book on which I finally break on Kat as a character. I didn’t like her endless melodramatic angst in the previous 2 books and felt it swamped whatever vestiges of character she may have had. This book is the same - but even the angst is overwhelmed by Kat’s constant rage.

Kat is angry, really angry, all the damn time. No, she’s not angry, she’s rabid. She’s like a savage animal snarling and lashing out at everyone around her. No-one can speak with her without her snarling, snapping or advancing on them menacingly and that definitely includes Ethan, the human house mate she’s supposed to care about and value. I think she actually spends more time talking to her enemies than her friends, simply because her enemies have taken more precautions against her constant violent outbursts.

And the writing is still extremely long winded. We have endless monologues about just how very angry Kat is, her rage being sparked again, her fury rising etc etc.

I find it impossible to like this character, identify with this character, root for this character or even tolerate her. It would be like tolerating a rabid bear with a toothache. Any break in her rage – be it Delai or her occasionally rearing attraction to Jonathon or even those precious, brief moments when she reflects how unfair and unpleasant she’s being to everyone. Just becomes another reason to be furious. I really can’t emphasise enough just how overwhelming and unending her rage is – it’s not just the long screeds of fury, it’s not just the fact she can’t be civil for 2 seconds with the people who risk their lives to help her, it’s the constant side references. The constant “I was in a full blown rage,” “slammed the door so hard the entire car rocked” “I was pissed off at the world” etc etc etc it’s not that there’s a reference to her endless world burning anger every chapter, there’s usually one every last paragraph. My book is full of highlights with the word “rabid” written over a dozen times.

As if being a rabid animal weren’t enough, Kat’s terrible ideas are so horrendous that we have to revisit our post on “Worst Idea Ever” and just have one entirely dedicated to Kat. She returns from her little holiday (i.e. she disappeared for a month without telling anyone, then was enraged at Ethan for finding someone to keep him safe, enraged at Ethan for worrying about her, enraged at Ethan for asking where she’d been, enraged at damn everything) to find a big bad vampire count is gunning for her and everyone’s advising her to run like hell. She responds by feeding, publicly, in another, EVEN MORE POWERFUL vampire count’s territory; an act designed to piss off the guy. Why? No reason. No, really, she has no reason at all for doing this. This whole scene is not only unnecessary but makes not one iota of sense. She also does a really good job of talking up how she has to plan and get all this information before deciding to assassinate vampires but she never actually does it. Her planning involves sneaking up on the building and looking for an open window, if there isn’t one, she goes in the front door. She then kills everything she sees until they’re all dead or she gets captured. That’s pretty much been the extent of all her cunning plans. They don’t even count as plans – they’re more leap in and trust to luck. Which is the same plan she uses – and it fails – with Adrian as well. It really should have failed earlier. Sookie and Elena would make cruel jokes about Kat’s intelligence, she’s that bad.

It can’t even be redeemed by interesting side characters – though they do seem to be more realised than Kat herself and I certainly prefer them to Kat – but that’s because Kat’s endless rage destroys anything else about her. But that same rage and angst stops us getting to see the other, more complex characters. Jonathon, Ethan and even Nathan all seem to be more complex and deeper characters than Kat the Rabid. But we can’t explore them because we’re looking through Kat’s eyes, and every time they try to say or do something she starts foaming at the mouth and driving them away. Seriously, there are Viking berserkers who would tell Kat to chill out.

This book falls down yet again on inclusion – this time without even having the angry Mexican Pablo. We do have the first definite GBLT character – a depraved bisexual or lesbian woman who is rotting and her minions love to erotically eat her dead flesh. Did I mention depraved? With inclusion like this…

Except for the aforementioned rotting lesbian villain and some nameless women draped around her contact, and briefly seen victims in Delai, Kat is the only woman in this very very very male story.

I want to like this book. The storylines, the action scenes, the world setting are all things I really enjoy and want to praise. But every time I do I run into Kat, frothing away. I don’t enjoy these books, alas, it’s a struggle not to skim past Kat’s eternal issues and problems and I really wish we could tell the same story without the Emo Berserker front and centre.