The Wolf At His Door (Runes Trilogy #1) by Adrian W. Lilly 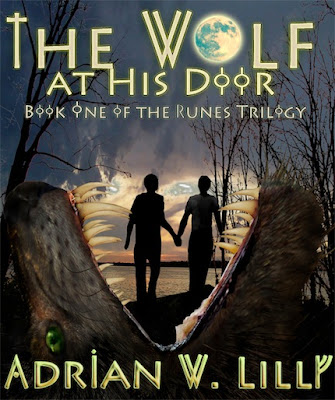 Alec has many good friends, a twin brother and big sister who support him and even now a new boyfriend – well, potential boyfriend. Sure their parents fight a lot and not all is warm and fuzzy – and his headaches can make him damn miserable at times, but things are good.

Except those headaches are prescient – an omen of doom to come.

When the werewolf arrives, it extracts a cost of blood. Friends, family and loved ones die, one after another. The town is rocked by a huge string of missing persons, people disappearing without a trace – and the new boyfriend Jared is more than what he seems

In the midst of chaos and loss, Alec can only find some way to stop the werewolf before everyone he loves is killed.

We have a pretty interesting and intriguing story here – one that takes werewolves back to being monsters, a threat a danger. Few books have truly made the werewolf as monstrous as this one – not just in terms of evil deeds and savage monstrosity (though the atrocities committed in this book easily match any that the monsters have committed in others) but also in terms of sheer unstoppability. The power of the werewolf, the horror of facing one down, the utter helplessness of being confronted by this monster has been excellently conveyed. The book also doesn’t pull any punches when presenting the horror of the aftermath, the carnage, the gore, the shellshocked and wounded survivors, the devastation left in their work.

We have some excellent hints of a broad world and some building epic metaplot that will no doubt lead to lots of fascinating revelations and development in the future. There’s a lot there that is being hinted at with all kind of implications of experiments and magic and powers that I really want to know more about

The main problem I have with this book is we have a lot of characters who are introduced to us very quickly and not a great deal of effort is made to develop any of them. And that includes the protagonist – who spends a decent portion of the book unconscious – in fact, I’m not even sure if it’s accurate to call him a protagonist because the book didn’t really focus on him. It just didn’t really focus on anyone else either. The only person who had a lot of her depth analysed, her past, her motivations and her pain was Ilene. And while it’s good to get a character so developed, her motivations, her past, her guilt, her shame, her battling to move past there, her loss and her confusion, I’m still left kind of wondering why I spent so much time in her head and not everyone else’s when she was so secondary to the plot.

We have a number of characters buzzing around the plot who didn’t seem to serve any role – Alec’s doctor, police investigating missing persons, police investigating the murders. Hey were kind of just there – and yes, you expect all of these people to be there, but why make them such characters, why have scenes from their point of view, why spend so much time in the heads of people who could just as easily been reduced to names on paper? They may be relevant later in the trilogy, I suspect several of them will be – but there’s just bloat now. There’s just a lot of time in this book spent examining the heads of people who aren’t really relevant to the narrative, to the detriment of the people who actually are.

This leads to many of the horrific incidents in the book not carrying the same weight. People are killed in this book and I’m not even sure who they are. There are so many people wandering back and forth I needed to keep notes just to figure out who each person was and how they related to the protagonist and, eventually, a note on whether or not I actually needed to care about this person, what they were doing or what they were feeling. One small advantage of Ilene‘s over-analysis is it gave us some window into the grief over the many many dead – but it was kind of the only window. And there were some characters dying here who should have been utterly devastating to Alec and quite a few other characters and it just wasn’t, not to the extent I’d expect. I certainly wasn’t moved because I didn’t know enough about them to connect.

It’s not like there weren’t grief scenes – Lucy had some powerful scenes. Ilene’s loss was heart rending. Jason had an incredible broken moment trying to prevent his wife from seeing the devastating mess left behind. But they weren’t sustained – we had a grief scene, the pain was wonderfully and painfully conveyed and then we moved on and, in some cases, they dead were just completely forgotten.

Together this all combines to make it hard for me to connect to any of the characters (except maybe Ilene) which is a shame because some of them looked pretty decent (Lucy for one) but I had no connection with them, we needed more focus on them, more development – especially on Alec and Jared. Another casualty of the lack of development and bloat of characters is I didn’t feel any real connection between Jared and Alec – I know they both found each other attractive and they had some banter moments, but I don’t see any more than that, and I think I’m supposed to. At best they’re friends with benefits – and I’m not even sure on the friends part since any time they spend in each other’s company seems to be fraught and distracted.

My next problem is the lack of any kind of resolution to this book. The big bad just kinds of disappears. There’s a whole lot of hints at world building: psychic abilities, bitten werewolves, born werewolves, a pack, a food source, an ancient history, experiments etc. But they’re just that – hints. There’s no exploration, no extrapolation and no grand reveal, partly because most of these revelations happen close to the end of the book. There isn’t any time for any grand reveals.

This leaves me feeling that this first book of a trilogy is a prologue – we’re setting up Alec’s back story, introducing some concepts and the world and introducing a lot of irrelevant characters who will later become relevant. But it’s too long and too involved to be a prologue. It didn’t work for me. It doesn’t help that the writing can tie itself in a knot at times – there’s a moment early in the book where for some completely unknown reason Alec starts rambling philosophically about water. I have no idea why, no idea what the scene was supposed to achieve (same with the random threesome, but at least that made sense).

We have some excellent female characters – Geraldine is capable, skilled and wise, the grandmatriarch of the family well prepared and determined to help, protect and guide her daughter and grandchildren (I loved her guidance when Ilene wanted to confess things to Jason – at the worst possible time. Her recognition that sometimes a revelation is less about informing the other person than it is about absolving your own guilt was excellent) She and Ilene are two of the most developed characters in the story. Lucy is strong and determined, refusing to be left out of the action even when grief and loss and horror drives her to shock and nearly destroys her life and so many of who she loves. She gets back up and will not be sidelined.

We have several POC – one of the police detectives is Latina (I would say she’s a side character but this book has absolutely zero idea how to make a character a side character, consequently, she’s quite prominent). We also have Rene, Lucy’s boyfriend who is Black. His character is an excellent one, he not only avoids many tropes but he carefully challenges them, pointing out others racism and class snobbery not just overtly but also by being a person who puts the obvious lie to everything negative believed about him. He’s dedicated, brave and caring – and he’s well loved by Lucy and valued by Alec both of whom fight to try and save him. Unfortunately, what they have to save him from (a werewolf bite turning him into a bestial monster) is a trope in and of itself, especially since he’s the only out-of-control-animalistic werewolf we see.

In the end, we have a great story and hints of a good world as well as some much needed inclusion. But all of it needs to be taken up a notch – the characters, the world building – I need more to be immersed in this, the writing didn’t engage me, the characters didn’t pull me in to experience alongside them. It just lacked that extra to make it a great book.