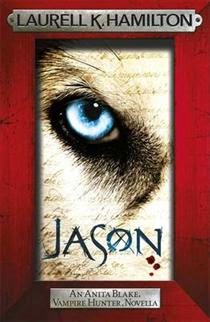 I saw this book described as a “novella” and thought “this is just going to be a sex scene”. Then I opened it and saw that it was 150 pages long so took it back and assumed there was going to be a plot. I was right the first time, it’s just a very very long sex scene with a pointless pre-amble. This just goes to show that even cynical me has some stubborn, foolish hope that refuses to die despite repeatedly being stabbed in the head.

But let’s begin with that pre-amble. First of all, in classic Anita Blake style, every character who appears, no matter how briefly or how irrelevantly, is described in ludicrously unnecessary detail. That includes characters who are referred to but never actually have any role in the book. If the post man had visited while they were talking, I’m sure we’d have three paragraphs describing him as well.

We also have a huge chunk of completely irrelevant and unnecessary recap. It makes me wonder if this is a breakfast ritual at Anita’s house, along with pulling out the relationship flowchart. They discuss Richard’s issues with Nathaniel and Jason because they’re not dominant/powerful/big hulking manly enough for Anita and then a big tour of the whole “who is ruthless and why that is a good thing”. None of this is relevant. The characters they talk about aren’t even in this book – and all of this has been shown before, so why does it need to be told? It’s just a random insert.

That done we have a visit from a weretiger (called Envy. No, really). She’s had sex with Richard and left because he keeps hurting her, hammering away with his super-strength and enormous endowment despite her repeatedly telling him that she’s not having fun and he’s hurting her. There are many ways this could have been handled sensitively and kindly, but since Envy is a blonde woman she is Clearly Evil and instead we have a recounting of how Anita can totally take it with her Vagina Of Steel followed by Envy being envious (ha!) of the wonderful life and wonderful lovers Anita has because she’s just so damn awesome. Because this is Anita and all other women are inferior – even when meeting J.J. a woman Anita actually likes, one of the very first things she does is describe how amazingly, wonderfully curvy Anita is and how much she isn’t.

Then to the endless sex scenes and the pre-amble to it – and the problems here. First of all, this series whole approach to sex and consent is broken. One element that was really strong in this book is the idea that saying no = prudery. If you are not comfortable with a type of sex or a sex act then this isn’t your taste or preference or even sexual orientation – it’s some kind of flaw you need to overcome. If someone comes to you and says you should have sex wearing a wet suite, riding a llama while singing Wagner, then you better get a snorkel, put on your horned helmet and check ebay for an alpaca. This is really pushed in this book – Anita doesn’t get off on voyeurism? Get over it. Anita doesn’t want to share a bed with someone? Get over it. Jade doesn’t want to have sex with men? Get over it. Everyone must want to have sex in all ways at all times with all people or they are evil prudes of prudery who need de-pruding.

There also continues to be some really unpleasant LGBT issues. First of all, while Anita has a female lover she’s very very clear she’s not bisexual – it’s Jean-Claude’s memories that are doing it to her honest, why she even forgets she’s not a man! She could just chant “no homo no homo no homo” during cunnilingus if it would make her feel better. The depiction of same-sex attraction is constantly conflated with kink (and there’s a lot of appropriation there) along with a lot of fetishism (because watching same-sex couples kiss is soooo hawt). There’s the continued presentation that all bisexuals simply must have a partner of each gender to be happy and they cannot possibly be monogamous. There’s also some gross judgement of gay men and lesbians – again pushing back to the idea that everyone must try any sex and not being willing to have sex with the opposite sex makes them focused on genitals (but, unsurprisingly, Jason and Anita are not judged for being heterosexual and both saying how they are not attracted to their own gender.) Gay men and lesbians are presented as “conservative” and even “straight” (because these straight people are totally qualified to dictate what is LGBT) because they don’t have the kind of sex Anita approves of and aren’t willing to have sex with the opposite sex. There’s an attempt to address people calling J.J. a lesbian when she’s bisexual – except she constantly refers to herself as a lesbian even while discussing having sex with men. Jade, who only wants to have sex with women, is constantly pushed to having sex with men and is presented as only being attracted to women because she was terribly abused by her male master.

The whole thing is rife with homophobia and fetishism and is quite unpleasant to read.

After all that we just have the sex scene that keeps going and going like a particularly tiresome Duracell bunny, is confused, repetitive and generally pretty dull.