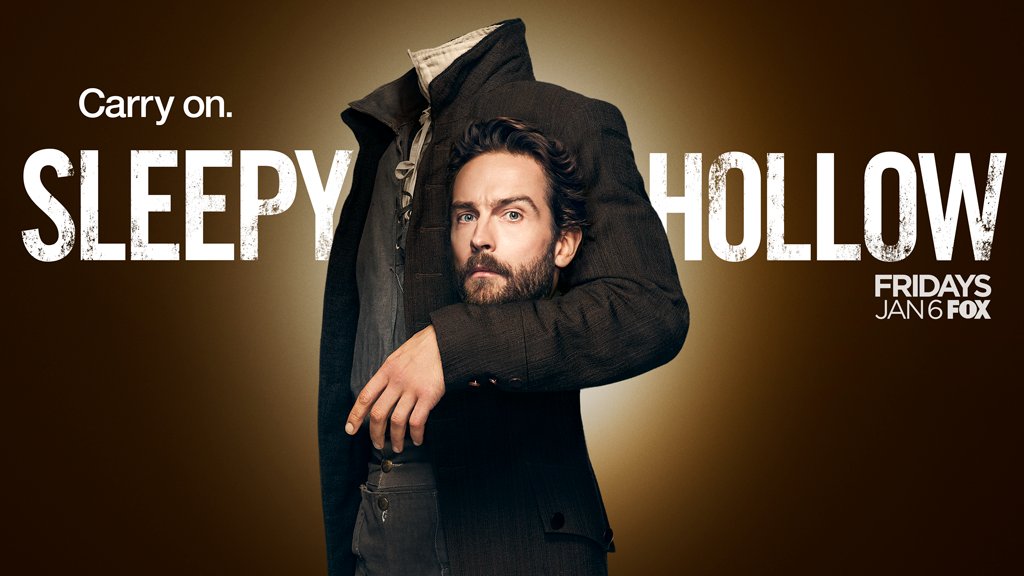 Crane might as well be headless because the entire premise of the show - two witnesses fighting evil was blown up at the end of last season.  Now it seems that the writers think that a change of location, a new archive of sorts and swapping one WOC for another will save this bloody hot mess. Unfortunately, all it did was make the whole thing seems disconnected because Crane doesn't work without Abby to bounce off of.

Ichabod is being held captive and questioned about everything that happened in Sleepy Hollow the last three years.  The man is confidant in his actions because with Abbie dead (yes that still hurts to say), no one will be looking for Crane.  It's not long before Crane manages to escape and when he does, he looks over his captors things and finds maps, as well as a drawing of the Lincoln Memorial.

Crane hoofs it to the Lincoln Memorial to the sound of Superstition, which as it turns out is the best part of this episode. Naturally, upon arrival, hell has broken loose. Diana Thomas, a Homeland Security Agent is there with her partner Eric and they've been attacked by a demon, who apparently broke out of the head of the statue of Lincoln.  Now we know why Lincoln had to wear such a big damn hat. Crane manages to scare off the demon before it can kill Diana but he's too late to help Eric, who lies dead on the ground. Although Diana is thankful to be alive, she turns her weapon on Crane in the hope of getting some answers.  Crane's intent is to go after the demon which Diana finds bizarre even after being attacked by said demon.  Diana becomes distracted for a moment and Crane makes himself scarce.

Outside, Diana tries to explain what she saw to her supervisor and he's quick to brush off her account because it's filled with a description of all the supernatural things that Diana saw.  He warns Diana that a report like this is a career ender and suggests that she just back off for now because the death of a partner can have a strange effect.

Diana magically manages to track Crane to the place where he was held captive. I say magically because even when the writers explain how it still comes across a pile of steaming shit.  Diana is determined to get answers for what happened and to bring the person who killed Eric to justice. We learn that she is a former marine and a single mother of a young girl.  Diana is still unconvinced about the supernatural stuff but points out a government agency in charge of keep track of strange things. Crane immediately recognizes the organisation as being started by none other than George Washington.

Together they head off to the offices and Crane is suitably underwhelmed when he arrives. The first person Crane and Diana meet is Jake Wells, who is bursting at the seams excited about meeting Crane. Since it's his job to track supernatural phenomenon, he's been following Crane's trail and his exploits in Sleepy Hollow. Jake even tries to snap a selfie with Crane which he quickly balks at. Yeah, so they got me to laugh at this one but I still don't forgive them for Cranewrecking this show and chasing Behaire off. Where was I? Upon further investigation, Crane finds a set of books which contain the secret history of America. This is where he learns that Abraham Lincoln was killed by a demon who used John Wilkes Booth's body.  To kill time, we get a flash to Lincoln being murdered. The whole thing is just ridiculous.  They figure out that demon will appear at a parade the next day and decide to make some magical bullets to deal with this.  Alex, who works with Jake, isn't sure that she's down with this whole demon thing but making weapons is something she loves to do.

Crane starts waving the flag to get the attention of the demon and lead it away from the people.  Of course when they arrive at the chosen spot, the demon is a no show.  The demon pulls a sneak attack and they are all saved by the most fabulous Jenny Mills.  Later, Crane and Jenny talk about making D.C. his home because he needs a fresh start.

We then shift to a rich business man named Malcolm Dreyfuss. At this point he's fine letting Crane walk free but has determined that there's no amount of blood he's unwilling to spill to achieve his goal.  After having the the statue of Lincoln's head destroyed, Malcolm frees a large stone coin of sorts. Told ya that big hat was hiding something.

With the day done, Diana checks on her non verbal daughter. Though she tries to engage the girl, she doesn't speak a word. The moment Diana leaves the room the girl pulls out a book filled with drawings of Crane. Obviously, Diana's daughter is the next witness.

I'm going to admit to never really being a fan of Sleepy Hollow.  I did however enjoy the interactions between Abbie and Crane and I am going to miss it.  This season premiere feels like an entire reboot of the series and I suppose it would have to be with everybody but Jenny and Crane being dead.  Despite the few minutes that Crane and Jenny spend speaking about Abbie, this episode just makes the last three years seem unimportant because what it did is drive home a sense of disposability about everyone, that is except for Crane, the White, straight, cisgender able bodied lead. Yes, half the cast is still of colour but with Abbie gone, can there any doubt that Crane will be shifted into the solo lead position with everyone else playing the role of sidekick?  When I look at Sleepy Hollow, all I see is lost potential and I really don't think that there's any coming back at this point.