The Hanging Tree (Rivers of London #6) by Ben Aaronovitch 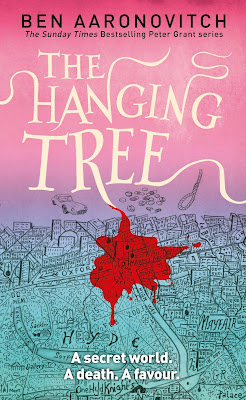 So long as Peter can avoid the wrath of Lady Tyburn, goddess of the river Tyburn, who is most annoyed at Peter over the arrest of her daughter

And there’s some Americans with guns which is never a good thing.

I love this series. I love it so much

I love how incredibly British it is. How very London it is. Every page is just so full of London, London places, London culture, London history. I don’t really know a lot about Ben Aaronovitch but he must be a Londoner and he both loves his city but also sees it very clearly – knows it for what it is.

The constant, fun wry comments about the city, the places, the rivers, how things have changed, how they’ve adapted are so much fun and add such an incredible richness to the series. Because we’re not just adding a rich supernatural world and culture to the city, but the city itself – the actual, real, London - is also explored in so much depth and history and commentary and it’s so much fun. And, honestly, it shouldn’t be because there’s such a lot there – but Peter’s irreverent tone, his completely sarcastic, very British and wry take down of it all is excellent. The way he loves his home but is fully aware of all of the problems of it as well, all of the nasty realities.

That acknowledgement of London as it is also includes all of its racial diversity. Mama Thames and all of her daughters are Black. Peter is Black, his mother from Sierra Leone. We have Guleed who is Middle Eastern, Muslim and wears a Hijab and plays a major role throughout the book become a de-facto Folly member (I really hope she joins up because she’s an excellent partner for Peter, her wry cynicism touching nicely with his occasional naivety). Please more of this!

On top of this there’s a real acknowledgment of how class, wealth and race affect people – how people are treated, what advantages they have and especially how hat relates to policing.

There’s an excellent moment where one of the characters continually assumes they know so much about Peter – and ye gods they’re all stereotypes everyone has heard so many times before and we know so many fools think this – based on his race and class and it’s just so ridiculously wrong and far from Peter’s reality and his family.

All of this insight also comes to Peter and policing – there’s a lot of knowledge of police procedure, some wry acknowledgement of the flaws and issues with the police (both past and present). It’s real, it’s topical, it’s funny, it’s informative and so very very snarky and very real. Lots of shoe leather. Lots of eliminating, pursuing leads, ticking boxes, and paperwork.


So excellently snarky. Honestly I love it.

I also really like the introduction of Lady Helena and the idea of magical practitioners outside of the Folly which came with some good commentary on how much the Folly was such a boy’s club and the sexism that came with it.

We do have some LGBT characters – one of the police is a lesbian and 2 of the suspects. They’re not major or meaningful characters and there isn’t any real discussion around them

Through that we have the magical world with the supernatural permeating everything with some awesome world building, more snark and lots of points of nuance.

In an odd moment for me, I’m actually getting a little annoyed by the meta plot. Not meta in general, but this meta specifically. I want to see the world develop further, see the development of Falcon resources and how Peter tries to get Nightingale and the Folly to increasingly integrate with modern policing. I love to see how Peter creates more links with Guleed and the new forensic experts and even tentatively forms more links with other magical organisations both local and international, uncovers other practitioners who exist outside the Folly and decides what to do with them. In general watching Peter expand the Folly into both modern policing, expanding it and seeing it modernise and adapt while at the same time both honouring “stakeholders” but not letting them take over and set the agenda (like Lady Tyburn). On top of that there’s the balance of maintaining human rights while also integrating magic and the supernatural into the story

While I’m not particularly enjoying the Faceless Man and Leslie. I mean they were interesting but they don’t really hold. I can’t believe I’m saying this but I think I’d actually prefer lots of mystical crime of the week (hey, Peter’s a policeman it’d make sense) with this background organisational development rather than continually chasing the Facelessman and his agenda.

It’s not that it’s not a great story – it is – but get out of my way I want to see this even broader metaplot that is coming. This hugely broad metaplot that is the backdrop behind the Faceless man story and everything else around this book and series.

I continue to love this story – its size, its depth, the humour, the utter realness of it – and the power that brings that realness and the supernatural together to create something that is immensely fun and quintessentially British.