Last week everything was going kind of well, except for Ezekiel’s team. The Saviours have a massive high calibre machine gun and use them to mow down nearly the entirety of his force


We get some flashbacks between him, his people and Carol as he describes his past origins and shows us, yet again, how inspirational and beloved he is. He also makes the point that he chose to become this, to be more - in the same way Carol did: neither of them started the way they are now but both chose to become someone else, someone new.


Ezekiel is saved because he is buried in bodies - it seems almost a dozen Kingdom people were willing to sacrifice themselves by piling on top of him. Because this is the devotion that Ezekiel inspires in his people


And exactly why Ezekiel is pretty broken now, and not just because he’s injured, can barely stand and is in pain. He’s saved by another survivor who is desperate to save his King - because Ezekiel is that beloved - but he is then shot by a Saviour who takes Ezekiel captive and drags him along at a super limping pace followed by a pack of THE SLOWEST ZOMBIES ever. Seriously, if this was the rate Walkers moved usually this show would have been even more boring than the porch season.


The Saviour continually beats Ezekiel down as he drags him along, planning to sell his head to Negan. And yes Negan is stuck in the Sanctuary surrounded by a horde of zombies, unable to leave - but he plans to use the big heavy machine gun to cut down the horde to free Negan.


Ezekiel is obviously pretty destroyed after seeing his people die and his own self-identity of being king is terribly shaken. Ezekiel is defiant but can do nothing - in the end he prepares himself for death, when Jerry (the big guy with the axe) steps in to save him. And Jerry is clear; Ezekiel is his King. He demands Ezekiel get behind him as their backs are to a fence facing a horde of walkers. Death seems inevitable but Jerry is still there, determined that Ezekiel is his king despite Ezekiel’s doubts:


And “thank you for being such a cool dude, your Majesty”. Ezekiel has always always been a cool dude. They prepare to fight to the end


But there’s another survivor: Carol. She’s facing down a large group of men with big guns and she’s all alone. 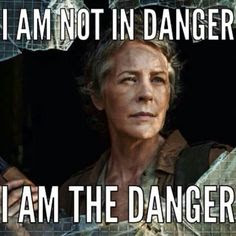 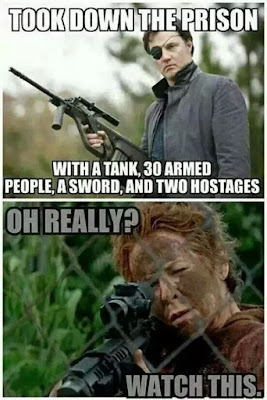 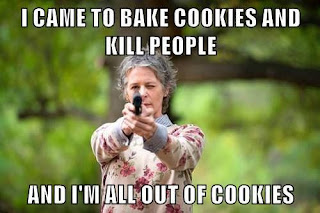 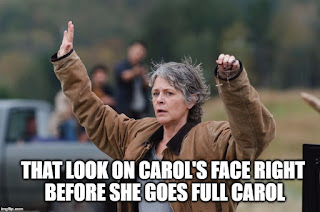 Carol duly shows everyone the flowers, leaving just two men with limited ammo facing down Carol and begging her to just leave. They want to take that big gun to the Sanctuary. Carol’s not having that - but at the last minute she decides to save Ezekiel and Jerry rather than make the remaining Savious cry for their mothers.


Ezekiel and Jerry are saved, because Carol. They now try to stagger to safety, followed by a legion of walkers. They’re obviously slowed down by Ezekiel but there’s absolutely no way Carol and especially Jerry will allow that to happen.


Until eventually Ezekiel tells them to leave him, and prepares a last stand to let them get away. Jerry objects “Your my king”
And Ezekiel angrily denies this - losing his pretentious accept he declares “I ain’t no king, I ain’t nothing, just some guy”


It’s the ultimate break down of Ezekiel - but they are saved by Shiva - the tiger appears, takes down the zombies and distracts them so they can get away. But Shiva is overwhelmed and dies - and yes, everyone is way way more devastated by the death of a tiger than anyone else on this show ever. Because humanity


They do get back to the Kingdom, but Ezekiel is a silent, broken man


And this can go two ways from here. On the bad side that could be it for Ezekiel, he could fall back, become a lesser character, not a leader, not respected and no longer willing or able to lead. This would be terrible


Or we could have a leader without the tiger - and that would be awesome. Ezekiel is, as I’ve said before, inspirational. He is larger than life, charismatic as hell and his people love him in a way no other leader of. He pulled himself . Do his people buy into his whole king schtick? Yes - because they want to not because of any legitimate believe in monarchy or that nonsense - as Jerry puts it, he’s a cool dude. He inspires them - and he could still inspire them. But it’d be nice to see him as an inspiring leader without the theatrics. Without the tiger. Without the silly accent. But the real Ezekiel, with his real voice, not the pretentious denial of who he is - but still with the love and devotion of his people