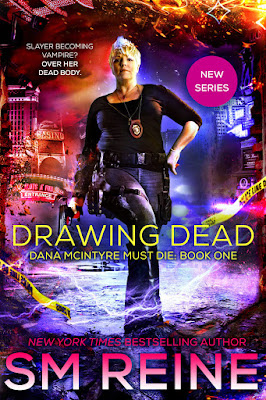 Dana McIntyre has always had an issue with vampires, even more than your average vampire hunter. They have history and she holds a grudge

So she does not take being bitten and turning into a vampire well. She fully intends to die before she turns. But not before taking all of Las Vegas’s hundreds of vampires down with her.

There is a possible cure- but is Dana willing to risk that? Can Vegas survive without Dana? And can it survive her vengeance?

I am now becoming ever more intimidated and by S.M. Reine’s world - because she has written about 300 series each of which have eleventy million books in it, all of which are connected and linked to a vast meta plot and world changing activity - and I AM SO BEHIND. So finding this new series my reactions were both lots of glee and a kind of gibbering terror. I will catch up with all her books! I will!

I was going to skip this until I caught up. But the cover. You know I’m not resisting that cover, right?

That said, despite the utter terrifying vastness that is S.M. Reine’s excellent world building and the truly massive amount of events that have passed, this book still works on its own even if you’re unfamiliar with the vastness. It does refer to major events in the larger world - events I’m only vaguely aware of - but this isn’t a vast world changing story. This is the story of Dana, Las Vegas and activities there. This history matters in terms of how the supernatural took over, how people were transformed by the Event and how much changed - but the details of it are not remotely necessary to tell Dana’s story. Ok, the gods thing? The gods thing lost me. I definitely need some severe elaboration on the whole deity thing.

That doesn’t mean the world isn’t amazing and broad and rich and weird. With the very conventional supernatural vampires and wereanimals, but throwing in some truly terrifying and alien fae with a very different take on anything I’ve seen before. And the cutest orc you ever did see

In fact let’s hit Dana and her wife Penny. First of all wife - yes, Dana is a lesbian, yes we have a lesbian protagonist, no she’s not “lesbian for Penny only” she is attracted to women and definitely loves Penny. Their relationship is not in any way fairy tale - there’s a lot of conflict and difficult there: but it’s down to Penny’s previous trauma as a victim of a serial killer, it’s Dana’s obsessive hatred of vampires, it’s her drinking too much - there’s a lot of complexities which make Dana not an easy woman to live with or love but they definitely do love.

Penny is also an orc - which means she’s huge and sweaty and has horns - and is still much gentler, more timid and generally more delicate than the touch talking, hard drinking rough and tumble - though much smaller - Dana. I like that because all too often depictions of same-sex relationships feel the need to throw gender roles in there - and here we have a relationship that turns these stereotypes on their head and has two big, not-conventionally attractive, yet still very powerful women leading it

We also have a trans woman who is an integral part of the city and the story and what i love is that her being trans is not oblique or subtle - we’re very very very clear including the party Penny and Dana had with her to celebrate milestones in transitioning - while also making it clear she’s a fully developed integral character beyond that. She does use being trans as a rhetorical tool a little too extremely to try and poke Dana into action in a way that doesn’t feel appropriate in both the coarse terms and draws unnecessary comparisons with the supernatural.

To me the most compelling character was Nissa, because she was so far away from anything I expected. And I’m frustrated that I can’t reveal anything about the empathic vampire without spoiling so much what makes her so surprising, unique and her story so utterly chilling. This is an excellent, completely unique take on this kind of character that I have never ever seen before and left me confused, slightly in awe and very very disturbed.

We also have Anthony Morales, a major figure in Dana’s organisation who is latino, the second in command of the vampires, and definitely the mover-and-shaker behind the scenes is Indian: both are important in this book and likely to be much more so in future books.

The story itself isn’t a complex negotiation or investigation - it’s a lot of kick arse action following these characters around so we can see who is around Dana: we see her family, her friends, her colleagues, her extended network, her mother figure and how she strikes sparks with pretty much all of them. We get to showcase all of this all with a whole lot of action and a great deal of fun

I do think if you’re going to have two organisations at war with each other while also fearing the authorities shutting them both down there needs to be more… grey between the two? Or at least they need to up the ante on how useful the big bad vamps are to the city economy. Otherwise I’m kind of left confused as to why everyone is so bothered by the hunters killing vampires.

And while I loved a lot of this story and the character relationships and the development of so many characters dealing with their sudden supernatural nature… I… find myself not entirely leaping on Dana? There’s nothing wrong with the character - in fact in some ways, she’s exactly what I like in noir: a surly, hard drinking, angsty yet powerful central character full of bleakness and dark voice overs… except while I like that character it just doesn’t work so well for me in this kind of setting with multiple points of view, when she has such a broad and loving support network. The surly, bitter, hard drinking loner with a heart of gold works great in a shadowed bar and a trench coat and maybe one woman occasionally referred to as “dame”; but less when in a happy, warm, loving family surrounded by people who love and support them. At that point I start to get more and more annoyed on behalf of all the loved ones she’s surling all over. Grumpy loner works better when you’re actually a loner, otherwise you’re kind of an anti-social git who needs to appreciate the people around them.