Dawn in the Damnation by Clark Casey 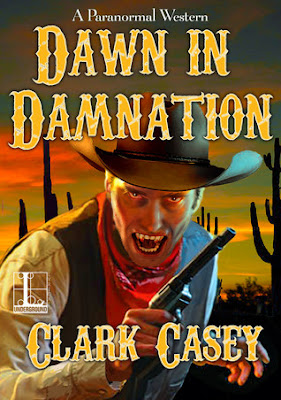 Damnation is the afterlife… not quite Hell but possibly in the same neighbourhood. Many a not-quite-as-bad-as-he-thought man ends up there to spend eternity drinking, gambling and not doing much else. Not out of choice - there simply isn’t all that much to do

Though eternity ends quickly for some - there’s a theory that if you go a year without killing someone then you’re redeemed for Heaven. No-one has succeeded so far; though Thomas, the town chronicler, is trying.

The men eke out their existence in the saloon, trying not to antagonise the werewolves or annoy the town’s vampire; and trying to not get into any gunfights they might lose.

But things are changing - there’s a new gunslinger in town, better than any before. And following him is rarest of all, a woman.
This book is, in many ways, pointless. It’s full of unknowables, with virtually no world building, no set motivations, little understanding, conflict without foundation, characters without purpose and no real conclusion

Which is the whole point.

The cast is in an afterlife… an old west afterlife - people die and appear in this old west town which was the original era for most of the people there. But time is clearly moving on - so we don’t know if, as the years pass, this town will evolve especially as new characters are descending down to the town of Damnation where they spend their days eating pork, drinking whiskey, gambling and having various gun battles.

But the core foundation of Damnation is even “Damnation” is an assumption. No-one really understands the nature of it’s town, why they’re there, where they go when they die, what its purpose is. What’s really fascinating is us being presented with a lot of really interesting rules and theories but ultimately it all rests on no-one knowing: of people living every day without real purpose except to live another day

I think beyond anything else that is the underpinning foundation of this book. We get conflict and more structured purpose later on and we definitely have individual character arcs. But the first half, maybe even third, of this book does an excellent job of world building - or theme building rather. We have all these people in this afterlife eeking and existence and struggling for… well… nothing? Anything?

This is an excellent foundation to underpin the feeling of almost desperate hopelessness with the place, in some ways even the desperate pointlessness of it - and of that thing thread of survival they cling to. It underpins all the characters as people come and go, new leaders, new gun slingers who leave their stamp on the town before fading when the next threat comes. And people die, even people who have been central for so long and it fades and changes

Which is what makes Thomas an interesting character and the closest thing we get to an actual protagonist without there actually BEING a protagonist - because he’s as close to a literary man of anyone there. A reporter, he wants to know and he wants to document - and it’s through his desire to chronicle the town that we get the true sense of how things work, who everyone is but above all the powerful underpinning theme because that is the essential background for the plot -when things change

When we get a gunslinger who seems more able to hold his own, not least of which because he’s at least partially benevolent. Things begin to change. But things change far more when a woman arrives… and that all sounds ominous and portentous in the blurb but it gets true meaning after the lead in showing how much change she brings: bringing not just her but actual life to this dead land and what that means to a land without both meaning or real change. And when those changes come and we have an excellent battle with the werewolves, and the town vampire sets up and everyone has some real moral conflicts from  people who have all kind of passively embraced the idea they’re evil and they’re damned

And that itself is fascinating - because they’ve decided they’re damned they accept (most) evil and it’s not exactly embracing it in a twirling moustache and cackling idea, but just a passive believe that they’ve all done something terrible (even Thomas has an excellent back story). But to have all these passive people now begin to actively interrogate themselves and their surroundings after so long of sinking into stupor really really works.

And Ms Parker works, albeit more as a catalyst than a character. She is a character, she has a back story and we have a duly established competence - which was especially important in this largely female derived world - both due to the lack of female entrants assumed to be because women are not as part of the violent world. Which I think is something of a whitewash (both exacerbating the danger of the old west and dismissing how much women were involved) but does explore the dangers and incredible vulnerability of a woman, pretty much alone, in a town full of aggressive, morally grey-at-best men. She navigates this extremely dangerous situation without us having to actually see any abuse or sexual assault and without us glossing over the danger and vulnerability she’s facing.

There is some racial diversity in mentioned - but not involved - Native Americans who live separate and a few POC who don’t really register on the plot at all. There are no LGBTQ people.

Through all this it sounds quite serious and dull but it's also surprisingly entertaining, with a lot of humour and banter that really works.

This book is just so very different from anything I’ve read because of its reliance on tone and… world not!building. This makes it a really hard book to review because all the things that make the book special - the lack of explanation, the character passivity, the confusion, the lack of motivation or useful exploration of well anything are all elements that would make me throw a book against a wall. But it works here, it is needed here - it creates this whole unique feel and theme which sets up a whole different level of stories which I can’t wait to see fully explore this world and finally answer all of these fascinating unknowns