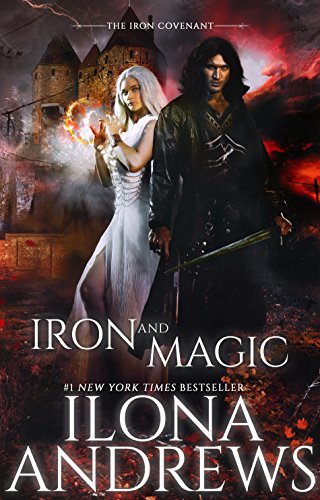 Hugh D’Ambrey, the great Biblical wizard’s Warlord, has been banished from his presence. For decades, longer, Hugh was Roland’s servant and a lethal, terrifying fighting force and general. And now he doesn’t know who he is

But his soldiers rely on him, people hold grudges, his rival Ness especially. They need safety, they need a home - but who would trust them

Ilara and her people need protection. They’ve been driven to run for too long but are now secure in an actual castle… but they have no soldiers. And Ness wants their land.

It’s not a romantic match… but it is a practical one.
It is so hard to review an Ilona Andrews book. It’s hard because the things that make these books so special - the awesome world building, excellent characters, massively fun storylines and tight, descriptive yet well paced writing are pretty much the same in every book. Early on they set the bar at awesome and kept repeating the same levels of awesome and that leaves me with a happy stunned with joy, grieving because I’ve finished it and then flummoxed on how to produce a review that isn’t a duplicate of the last review

This book follows Hugh D’Ambrey - a very different standpoint from Kate given how he has been such a major villain for much of the Kate Daniels Series and how he is, pretty much, The Worst. I admit to having some reservations - I’m not against redeemed villain narratives but all too often they’re done far too simplistically which rarely if ever actually touches real redemption and usually amounts to a handwaving of their past

But this worked. Because it didn’t try to redeem Hugh. Hugh is a monumental bastard and always has been. He doesn’t claim to be different, Ilara doesn’t think he’s different, even the fact he wants to preserve his people isn’t presented as making him a good guy. Even exploring his toxic relationship with Roland and how Roland controlled him isn’t used to redeem or excuse him (though it does include some really excellent character growth moments as Hugh basically learns how to be Hugh without Rolan’s overwhelming presence). Even meeting old enemies who are grudgingly willing to work with him isn’t presented as forgiveness, even when he apologises. Even his own levels of self-hatred and self-recrimination: all of this is here but, at the same time, I don’t think the book ever intended me to think “Hugh is a good guy now”.

And I really like his relationship with Ilara. Firstly she’s an equal - she has her people and he has his both are the supreme leaders who have earned a vast amount of loyalty and even as the two factions begin to blur, it never happens in a way that undermines either of them. Neither are ever the junior partners and while he clearly has combat advantages over her in some situations, she is equally clearly the one with by far the most powerful magic.

And they hate each other which I love. Yes, I know I talked about persistence not being a virtue and love interests whose dislike is worn down by one party’s persistence. But that isn’t happening here - Hugh and Ilara marry for political reasons, so people will believe that their alliance is real (especially since Hugh. under Roland broke a whole lot of alliances). But Hugh and Ilara despised each other from the very first day and their sparring is glorious. Their searing loathing for each other (even as it slowly melts into respect but is never ever not a battle) is hilarious and mutual - Hugh isn’t setting out to win Ilara’s heart and Ilara

I also like the grounding reality that their conflicts can bring - with them arguing over how much things cost and how large Hugh’s monetary demands are. In fact I love that as an entire branch of the storyline - while fighting the many arcane and terrifying enemies that face the castle, they also take time to make alliances with local authorities, overtures to nearby towns and establish business and trade deals to maintain and increase their wealth. This mix of the mundane with the magical is compelling and also makes them even more cemented as leaders (and helps further them as peers since Ilara is more of an expert in this field)

Ooh, bouncing to another thing I love - those myriad arcane threats. In a world setting that has set up an enemy as epicly as the Kate Daniel’s series (there was a moment in a previous book where who and what Roland was was finally spelled out and it was EPIC enough that I couldn’t sit down) but at the same time in this glorious complex and varied world there’s never just one threat or one enemy. I like that there were problems from all sides.

I also like how, while Hugh and Ilara are Major Powers they’re not the only major powers among them - I like the surprising little revelations, the commonality of magic and oh, hey, your next door neighbour may actually be a creature of legend. Even though this book was very much ALL ABOUT Hugh and Ilara (I would hesitate to say any other character was MAJOR despite the huge number) we still got several snippets of several other characters ot throw flesh on their bones and make them intriguing. Whether it’s Hugh’s lieutenants like Bael and Stoyan or Ilara’s own council with head witch and druid and more. This also continues this world setting’s show of diversity - several of Hugh’s Iron dogs are POC, with a Middle Eastern werewolf scout and at least one Black lieutenant. Ilara’s chief witch is a Black woman and major part of her entourage is Deaf. We also have Ness a Native American character who has magic and power in a completely non-stereotyped way. The fact there are several women among the Iron Dogs is mentioned in passing and shows several of these characters and really normalises the female warriors. No-one thinks it strange and the language used to describe them doesn’t single them out as the ZOMG FEMALE IRON DOGS just as the Iron Dogs

I also kind of like how even relatively minor characters and people in Ilara’s group tend to have little magic tricks. And how so many of them snark with both Hugh and Ilara but also with each other

Sadly, if there are LGBTQ characters among this vast cast they’re just brief mentions and not characters even among the big cast.

I love this book and think Hugh and Ilara have a huge amount of story ahead of them - but I worry if this will ever happen. The Kate Daniels series is, tragically, coming to a close. If Kate is out of the picture along with her major antagonists, what would that even mean for Hugh and Ilara’s story? Would it continue

I dearly hope so

Also with all these TV adaptations why hasn't anyone approached Ilona Andrews? WHY?!