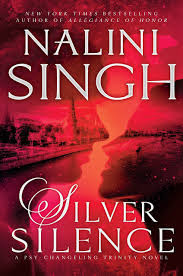 Silver Marcant is the scion of the power, influential, Marcant family. She is also the assistant of Kaleb Krycheck, de facto leader of the Psy. She also runs the global emergency response network

She is a busy woman

She has little time for people trying to kill her, or big clumsy werebears trying to insert themselves into her life
This book marks the transition of the Psy/Changeling series into the new series, the Trinity era - and I really have to praise how excellently this has been structured, as I referred to in Allegiance of Honour the transition book in the series. That book excellently summed up where nearly everyone was in their lives, the position of the world and what would be the new conflict coming forwards. The overarching story of the last 15 books has been the fall of Silence

Silence is over. Silence is done, that chapter is closed and with Allegiance of Honour setting up the new foundation we have the new conflict: what happens now? Where is the world? Especially as it becomes apparent that the different races need to be more united than ever

Behold the Trinity - where Silence has fallen and the whole world has changed - and with it the whole tone of the series is much broader as well. The previous series felt more focused… we had a couple and the werewolf pack/psy group they were part of. And it was pretty much localised. Yes there was the fall of Silence, but largely the battle against Silence for most of the Psy characters for most of the books has been survival. Even the Arrows, the Shapeshifter packs, Devraj Santos’s hidden group, are all stories of survival (well and romance, obviously). Survival against the evils of Psy Society, against discovery and occasionally about their survival against their own exploding psy abilities. Yes society is changing in the background but that’s more a side effect of their quest for survival rather than a goal they’re actively pursuing until the last few books

And so now we have Trinity and I think branching a whole new series was the ideal way to do that and emphasise how the foundational theme of the series has changed. Trinity, forged from the Humans, Changelings and Psy to create a more hopeful, united future. And paradoxically, a more diverse one (in terms of factions): the Psy have somewhat broken or, rather, with the fall of the Council the divisions have become more relevant. We don’t have “the psy” we have the Arrows and the Empath Collective and the Nightsky group and Kaleb’s faction suddenly being more individually defined even as they work together. Or the shapeshifter packs who are distinct entities rather than the unity of the Wolves and Leopards. I think they’ve always been so divided but rarely were they all so involved in the close, personal focus of the previous books.

Which brings me to the excellent choice of Silver as the protagonist for this book - Silver Mercant so nicely bridges all of this and brings the new collective focus on several factions since she’s the head of the global emergency network while she herself is both perfectly aligned with Kaleb Krycheck while at the same time being a member of the powerful Mercant family which is allied with him but definitely not in his pocket. Silver represents the different factions being balanced but ultimately acting in unity that truly defines this new series. She’s an excellent choice of protagonist to herald in this new era

In addition she has all the qualities of Psy that are so powerful - powerful psychic abilities, cool collectiveness and a fierce, insightful competence that is impressive to behold. But she also has a deep vulnerability stemming from her powers - one that Silence saved her from, a nice and important reminder that Silence wasn’t imposed on a whim but because it was literally trying to save the Psy race and, if it is discarded, then there will be problems from that. I love Silver, she’s a microcosm of everything the new Trinity faces.


And then we have her love interest because it is a romance. And I’m kind of torn. I have said again and again over the last 15 books that I am not a fan of these repeated shapeshifter males poking distant Psy women, crossing their boundaries, pushing touches on them, invading their homes, bypassing her security and generally ignoring everything she wants until she gives in

Sure, Silver gets on board more eagerly and readily than past protagonists have but there’s still a lot of pushing, space violation and no-ignoring before we got there. And that’s tiresome. And it’s a distraction from this excellent foundation for the new direction, for Silver’s excellent work and her involvement as a character in her own right rather than a servant of Kaleb.

Not that I don’t like the werebears. I am actually rapidly becoming a huge fan of werebears in the books I’m reading. I love these great clumsy, loving, fluffy, family orientated big eating big drinking doofuses. I love them, I do - they have so much joy and happiness and passion and a complete lack of decorum. They’re so much less SERIOUS than the other shapeshifters. And there’s a real sense of love and family there - Valentin and his sisters have an amazing relationship, Valentin and his seconds and other members of the bear pack is super familial. I got a far far far greater sense of the pack as a home full of people the Alpha deeply deeply cares about from Valentin than ever I got from Lucas or Hawke. They are kings, noble leaders, rulers. And yeah, they’re benevolent and good at it - but Valentin is a Patriarch - in that overly ideal sense of what a patriarch should be but never is. Loving and caring, living to see the cubs and his people smile, laughing and joking with his kin in a way Lucas and Hawke just don’t. When his people screw up he is Deeply Disappointed, but endlessly loving and forgiving and he would die a thousand deaths before you laid a damn finger on his people. I love Valentin so very very much more than all the angsty, dour I’m-tortured-and-scary-and-need-defrosting-with-love-because-PAIN protagonists that have come before in this series. And this genre. And media in general. Oh gods stop them.

On top of a great plot, some great world building, some characters I absolutely love and this whole new direction I’m excited about, we also have a lot of very common diversity for this series. We have a number of POC, especially for a book set in Russia which a lot of people outside (and inside for that matter) of Russia tend to view as blindingly white. Silver is, in her on precise Psy manner “78%” caucasian, Valentin is described as having “honey brown skin” and two of his chief lieutenants are part Angolan and clearly POC. The Psy/Changeling series has always contained numerous poc and this is definitely continued into this book

It also introduces as a side character the series very very first LGBTQ characters. I mean they don’t have a relationship or much effect on the plot and their sexuality is there and mentioned like three times and for this I lavish… absolutely no praise at all. Seriously, this is the 16th book in the series. 16. You get no cookies for remembering LGBTQ people exist after 8 bajillion characters. (16 bajillion if you recognise that the author’s other long running series, The Guildhunter Series, has also had no LGBTQ people in 366,056 books.) Maybe if they do something with him I will preheat the oven to whip up some of my most basic, butter-sugar ally cookies, but for nothing until book 16 you need to pull out something miraculous for me to reach for the chocolate chips.

This book makes me really eager to see where this series is going from here - it’s broadened so much, the world has opened up, the excellent world building has been taken to new levels, with a new focus and I can feel the full sense of the vast new chapter that has just begun - and Silver is the perfect character to bring this in.