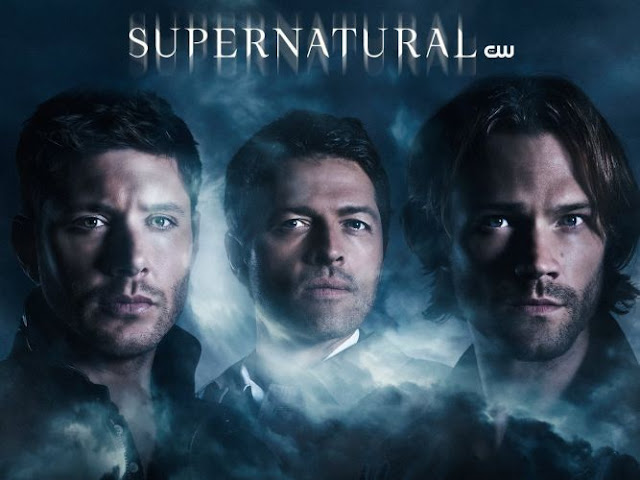 After a very very very long recap - honestly after fourteen seasons it’s amazing every episode isn’t just endless recap - we open with Dean running a bar with Pamela Barnes. She was a recurring character on the show, a psychic and one of Bobby’s contacts who became blind when looking at Castiel’s true form and later died because she’s female and on Supernatural and that’s just dangerous.

He’s having a happy time drinking booze, having no customers, not!flirting with Pamela and killing the odd vampire who shows up. And not selling his bar. This quickly replays on a loop and this is obviously Dean stuck in his headspace

And am I the only one who thinks that there’s absolutely no way Dean’s headspace bar would have country music while classic rock still exists? C’mon Supernatural you know your own soundtrack!

So to everyone else - the terrible plan of terribleness has failed and now Dean is newly possessed by the archangel Michael and there’s an army of monsters about to turn an entire city into monsters. Not an important city or big one, but Supernatural has always had a kind of rural-mid-west thing about it that it’s not going to break that now.

So then the gang throws holy oil at Dean!Michael and manage to get the holy handcuffs on him. Which… well they had a plan B I guess? They could have maybe included this in the planning? Maybe thrown the holy oil at Michael and then gone in with the spear? Or maybe it needed unnecessary gloating to work?

Michael declares that their puny handcuffs totally can’t hold him. Except they can. Or at least for the time being. But they can’t stop him summoning his growing army of monsters who begin banging on the hastily secured doors.

With no idea what to do, Sam decides to call on the Reapers. Billie, the new Death, always has a reaper following the Winchesters around because they’re both a) annoying and b) there’s grudging respect. But mainly A.

So Jessica is their currently assigned Reaper - because they’re so annoying that she’s had to assign shifts of Reapers to watch them. Jessica then explains to Sam that she’s a reaper and it’s so very much not in her job description to save people. Quite the opposite. He tries to invoke some debt the Reapers owe them but she points out the Winchesters can’t fuck things up, then fix said fuck up, then act like everyone owes them for that

I like the Reapers, they’re so very good at calling out Winchester shit

Michael pipes up to say in his world they’ve destroyed death and enslaved all the Reapers. Since people are regularly dying on his world I can assume this is either a) nonsense, b) the writers threw it in to sound ominous without thinking what it meant for their world building) or c) Archangel shenanigans

Thankfully some other mystical force gets in touch and whisks Sam, Castiel, Jack and Dean!Michael to the Winchester cave which is rather surprising but hey good use of Deus Ex. It’s also surprising to Maggie leading the extras to fight the monsters in the city - but thankfully Michael now summons those monsters to the Winchester cave so they stop destroying and recruiting

That leaves Sam & co thinking what to do next and they decide, following a previous experience with Crowley and possession. So they want to go into Dean’s head using shenanigans to snap him out of possession

While this is happening, Michael is trying to play mind games with everyone telling them all how much Dean doesn’t really love them and just sees them all as burdens blah blah honestly after 14 seasons of really unhealthy co-dependence it’s pretty ridiculous that Castiel and Sam may even feel this for one tiny second. And they don’t seem too so I really don’t know what the point is. Jack has a brief wobble but, really, can we not do the whole “bad guy says obvious shit to make us turn on each other and we’re going to fall for this blatant ploy” because it’s tiresome to say the least.

They do manage to get Michael to expand on his motives. Back in his world when he and Lucifer squared off he assumed the absent God would appear and reveal his plan or get involved or something. He didn’t: the world was destroyed and god didn’t appear. And then he took over Dean’s body and saw his memories of Chuck. A writer. And writers make multiple drafts and discard them - to which he realised Chuck was pretty much creating worlds, finding fault with them, discarding them and moving on

Which… is not exactly an entirely inaccurate interpretation?

So Michael has now dedicated himself to hopping from world to world, destroying them all until he finds Chuck himself - then killing god. Which is a super melodramatic motive but given the whole being an archangel abandoned by god thing, kind of has a point. I mean, that would kind of put me in a “fuck all the things” mood

While everyone jumps into Dean’s head that leaves Maggie, Jack and some of the extras to defend them against the horde of monsters. It starts to go very very very wrong until Jack manages to tap into some nephilim power, nuking everyone.

Inside Dean’s head Sam and Castiel quickly find the happy memory after Sam realises you can’t trap Dean in a traumatic memory because he has waaay too many and he’s just too immune to endless angst for it to work against him any more. I almost laugh at this that they go into Dean’s head and realises it’s just layers of trauma one on top of the other and the reaction is “shrug, yeah he’s a mess”. And just move on from there

They find the happy fake memory and recognise it’s out of place and gatecrash on Dean’s happy bar fantasy. And it’s a pretty cliched scene but on fastforward because it takes like 2 minutes for them to tell Dean “hey, Pam’s blind. Also dead.” And Dean realises that he has never known a woman to live for more than 2 years so this must all be fake!

So then Michael!Dean arrives into the headspace to say RAWR EVIL and also MIND GAMES. Which doesn’t work, so they punch each other as well. But in between all this they all info dump that this is technically Dean’s head so Dean is in control. Even with Archangels around

Because Archangels can literally kill death but can’t overcome humans when in their own fantasy mind bars even though they banished them there. These are the rules. Apparently. Yes.

So because Dean is the master of his own head he sticks Michael in his mental store room and locks the door and insists his head, his rules so he decides this WILL hold Michael. And it’s his head so he does

I do wonder what the plan was if Michael hadn’t decide to join them in the dream pub? But he did and then The Rules Applied apparently so that’s all good. The day is saved

Sam praises Maggie for leading the extras. The monsters happily all went their merry ways to become various monsters-of-the-week for a few episodes

Castiel tells Jack off for using his soul powers, warning him that there are consequences which could fundamentally change him. Honestly what’s with the vague warnings here? We know what losing your soul does - please be explicit in your warnings! No-one cares about vague warnings

And Billie visits. Turns out she was the one who breezed in to save Sam and all but now she has a warning. Once upon a time her library had a thousand fun ways for Dean to die… which I’m sure she had fun reading. Now they all say the same thing - Michael escapes, possesses Dean and takes over the world. Which is bad. Except there’s one book with another option. This is not revealed to us to give the writers plenty of room to bring shenanigans later.

Dean is already struggling with Michael hammering away in his head

Ok…. I’m going to say it: Jensen Ackles embodies the character of Dean and his acting as Dean is always A+++ on point. But as Michael? Just this calm, slow monotone all the time with occasional smirking? Not really selling it to me.

Also, hey they can go into people’s heads and just mess with possession. Since the gang can’t even be arsed to attempt a exorcism in the last 10 seasons, it seems even more glaring to

As for the plot… it’s another ok ellipsis moment. Because am I the only one who isn’t a huge fan of having a big mid-season finale moment and then resolve the whole big cliffhanger in one episode. Sure we have some hooks for the future, but for now the Michael storyline has been sort of put on hold… but it felt easy. I mean, not bad - but… it relied on some not-exactly-impossible-but-still-a-little-dubious twists and rules in Dean’s head to make it work. It was… I don’t want to say convoluted per se but it can definitely seem convoluted on a clear day. There’s a whole lot of plot convenience there.