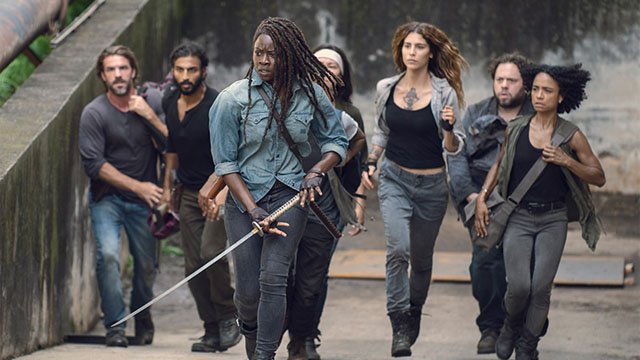 The new reboot continues and we have to remember Jesus is still dead, after being already only blink-and-you-miss-it gay and having his storyline vastly cut from what it was. No, I’m not amused. Oh yet Negan is alive and free. Of course he fecking is

And we have the introduction of a new enemies, a group of people in a post technology world that exist by hanging around with lots of rotting bodies. They call themselves the Whispers. I call them the Sufferers of Septicaemia. And, of course, all the settlements have turned against each other for not apparent reason, perhaps only because without The Supreme Lord Rick everything must collapse because all hail Rick.

Which means we open with Jesus’s corpse (not over this) and Michonne and Darryl doing a fighting retreat while everyone withdraws. And having to learn that fighting human led Walkers is awkward - after all a closed gate is no longer an impassable barrier

Alas we do have to catch up with Negan and he isn’t just eaten. He is lurking around being sinister and trying to escape and is found by Judith holding a gun. He tries to talk her out of shooting him - but wisely realises she is Not Bluffing. Judith is a child of the apocalypse and ruthlessness will be baked into her.

At least I would have thought so -but she still lets him go. Aaaargh really? WHY IS HE NOT DEAD?! Everyone has to agree that “You won’t shoot” “yes I will - bang” would have been awesome.

In Alexandria a whole lot of people whose names I don’t remember are being organised by Tara and Enid. And Luke, one of the new guys I guess whose name I better remember, volunteers to help to get in with the group, teaming up with Enid’s boyfriend Alden

Alden is so going to die. He’s such angst fodder. They talk music but I’m not going to pay much attention to them until I know one or more of them is going to actually live

Either way it’s all pointless because Michonne and co make it back fine anyway. On the way they run into some Walkers and Daryl has found a convenient way to tell who is actually a Walker and who is a Whisperer… shoot them in the leg and when they scream they’re a human. And about to get eaten by all their fellows

Which kind of puts a big question on how effective the Whisperers are since they have to stumble around one trip or sneeze from being eaten, they’re incapable of running or seeking cover when faced with range attacking and have to go into battle while method acting. This has flaws as a battle strategy

Exploiting this, they manage to grab a captive to drag back to Alexandria. There everyone is sad about Jesus being dead. They quickly remind us as well that they want like ALL THE VENGEANCE because they totally care about Jesus. Honest. Unlike the writers

Michonne, after bonding with Daryl over the whole dead Rick thing, decides it’s time for her to head back to Alexandria, with Aaron declaring how he’s totally agreeing with Michonne on how they should hunker down and never co-operate with their faithful friends to launch a co-ordinated response to the army threatening them

Because… reasons? Yeah that made no sense at all.

She leaves Daryl behind to question the fragile little remaining Whisperer - he intimidates her a lot in which she talks about how grim everything is, they need the dead to survive and, oh, all settlements like this fail eventually. She mentions her mother but her estimate of the numbers of Whispers are clearly lies. Also they don’t have names.

While Daryl is all meaaaaaaaaaan to the woman, Henry who has been locked up for being drunk is looking on and wringing his poor poor hands over how mean Daryl is. And the woman bonds with him telling her name Lydia.

With Daryl listening outside

I don’t know if Henry is in on this or whether Daryl is using him. But I’m not… sold on this sudden crafty insight from Daryl. I mean, yeah Michonne said that he’s the utter best judge of character ever but… since when? I mean he’s a hermit loner who grew up with a violent racist. At what point did he gain all this insight into humanity? Because it wasn’t at any point during the show


So he wanders back to the Saviour’s ruin and is all dad and he isn’t eaten by zombies or dogs or zombie dogs which is just deeply depressing. 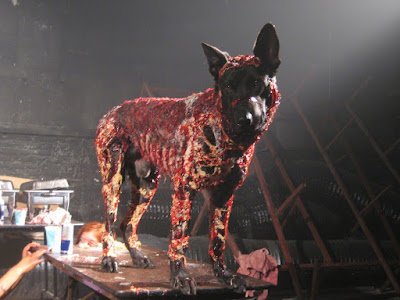 Eventually he is found by Judith who…. Just wanders the woods alone? I mean, really? This is something that happens. She shoots him which doesn’t actually do much damage and they agree that there’s nothing out there for him and he agrees to return to Alexandria.