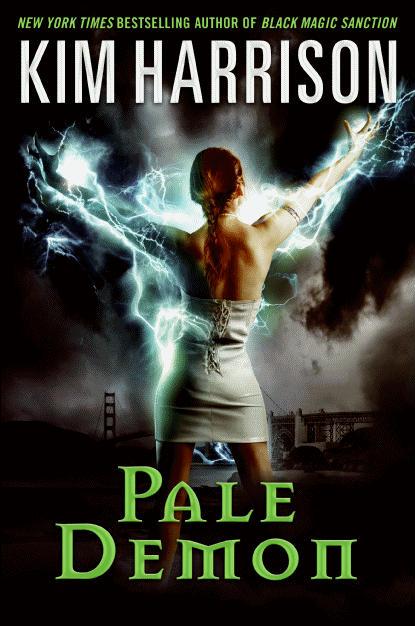 Spoilers Ahead
Pale Demon basically involves the road trip of a lifetime as Rachel, Trent, Ivy and Jenks race across the country to get to California.  Trent is on an elf quest and Rachel is attempting to get her shunning lifted.  If I had to pick one thing this book is about, I would say it is about the gray between good and bad.  We learn that Rachel is indeed a demon, but does this make her a bad person?  She says repeatedly, that she has never killed anyone and that she has never hurt anyone who has not hurt her first.  There is also the issue of Trent, who we know has been an asshole since day one; he’s imprisoned Rachel and attempted to get her killed on several occasions.  Can there be anything good about him? There is also Al.  Does he actually care about Rachel, or is she a tool for him to regain his prominence?  Do Demons actually have a soul?  As you can see, question, after question, after question.

This is the kind of book that you cannot begin, if you have anything else to do because once yous start, you will be drawn in and be incapable of putting the book down.  The unfortunate part about this is, that when you get to the last few pages, the desire to stretch the story out, to read slowly and savor every last word will take over and you will war with yourself over finishing the book, and holding onto the world that Harrison has so brilliantly created.

In the end, I will say that Pale Demon exceeds expectations, and leaves you hoping and wondering.  Can Rachel and Trent actually mean something significant to each other? If you think about it, though the relationship has been thorny between the two of them since childhood, they have been a constant in each others lives.  As much as they repel each other, at times they are inexplicably bound to each other.  This is the question that leaves one wondering at the end of the book.  We learn that Trent is not only lonely, he is vulnerable.  Rachel’s life will always be a hot mess but isn’t that what Trent needs - a true equal?

I don’t want to leave you with the impression that this is a classic love story, or the reclamation of someone who we have viewed as bad from the beginning, because it is not nearly as simple as that.  I will however say that if we live in a world of gray, instead of Black and White, more is possible and it is into that vacuum of possibility that the reader can begin to envision the gentle ebb and flow of change, in a world so far outside of our own.