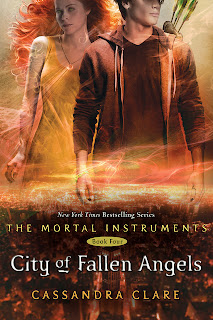 Now I’m going to start positive. Yes, I am going to try.
First of all the story is a truly great story. It’s involved, it drew me in. the villain was villainous, the plot believable and I genuinely wanted to see what happened. The Shadowhunters, mortals enhanced with the blood of Angels who gain mighty power by drawing runes on their bodies. They train in combat to fulfil their epic duty to protect the world from daemons while at the same time negotiate their delicate and often condescending and fraught relationships with the other creatures of the world – the fae, the warlocks, the werewolves and the vampires. All the more complicated when one of their own has gone rogue – and is willing to take down everyone and everything to get his way – the genocidal destruction of the other races and any Shadowhunter who consorts with them.

It is a great story, it’s even an epic story. And the world is deep and rich, the world building, the use of the Marks for powers is relatively new, there’s a distinctive sense of unique cultures and a very large varied world. I am curious about all of the “Downworlder” races and want to learn more about them. It really does have some great elements that could have been developed wonderfully and would definitely make the books a great read.

But, unfortunately, there are also some barriers.

To start with, I had a really hard time getting into this book because I think it was written by a drunken monkey. No, really. On a scale of 1-10 of writing, where 10 is Shakespeare and 1 is Twilight, this is a 1. Yes, this is another Twilight. It is so full of redundancies, gross over-writing and just excessive verbiage that it can be not only a drag to read, but painful to read.

This is the kind of writing we have – Clary is sat with her friend eating at a Mexican cafe having a conversation and every single line of speech is accompanied by ‘she said, eating a hot pepper.’ ‘he said, taking a bite of burrito.’ ‘she said, chasing a nacho round the plate.’ WE DON’T NEED A BLOW BY BLOW ACCOUNT OF THE DAMN MEAL! Irrelevant! Pointless!

In fact, the only way to adequately display this writing is with excepts:

“Clary pulled her heaphones out – cutting off Stepping Razor in mid-song – and rubbed her aching temples. It was only then that she became aware that the loud, piercing sound of a ringing telephone was echoing through the apartment. Tossing the sketchpad onto the bed, she jumped to her feet and ran into the living room, where the retro-red phone sat on a table near the front door.”


Here, let me fix that for you: “Clary took off her headphones and heard the phone ringing. She quickly ran over and answered it.”

“The door opened with a thump. It was Luke, his arms full of what looked like biog square pieces of pasteboard. When he set them down, Clary saw that they were cardboard boxes, folded flat. He straightened up and turned to her with a smile. ‘Hey, Un-hey, Luke,’ she said. He’d asked her to stop calling him uncle Luke about a year ago, claiming that it made him feel old, and anyway reminded him of Uncle Tom’s Cabin. Besides, he’d reminded her gently, he wsn;’t really her uncle, just a close friend of her mother’s who’d known her all her life. ‘where’s mom?’


Let me fix that!: “The door opened and her mother’s oldest friend, Luke, came in carrying an armload of boxes.”  TA-DA!

This is common throughout the books. It is actually a comment on how GOOD the story is that dredging through the writing wasn’t torture because the story kept me hooked. If the story had been any poorer I’d probably have put it down and avoided it like Tami avoiding LA Banks. But yes, the story really is good enough for me to endure this writing and STILL call it a good book.

But there’s another problem.

Her name is Clary. She’s the main character, and in every book she has made me cheer – for the enemies in the hope that one would kill her. I was disappointed. I have literally never come across a main character in any book I have disliked more – and I’ve read the Vampire Diaries.

She takes self-centredness to an incredible degree – and in this genre most of protagonists are as self-centred as gyroscopes. Every character exists to serve her, their lives revolve completely around her. Worse, she compounds this by having an incredible entitlement complex – near strangers invite her into their homes, feed and clothe her, help introduce her to a whole new world – and she’s not only happy to just take it as her due – but equally happy to ignore, disrespect, insult attack or otherwise be complete snowflake to them.

And finally she epitomises the trope of “spunky agency,” a trope we’ve spoken about before. Clary has never had a good idea. I have literally lost count of the times she has said or done something that has left me gaping – to say nothing of her flailing randomly in a country, culture and among SPECIES she knows nothing about! Between portal leaping, insisting on going places everyone says she shouldn’t, going into dangerous situations without back up etc etc etc (there’s not enough etceteras). There are prison cells in so many buildings in this series – someone please lock her in one of them.

In fact, I have declared a new Award when discussing Urban Fantasy. The “Clary Award” for sheer, self-destructive foolishness. Because she is now the avatar of this concept.

And because of Clary, I ended up disliking these books. Most of the other characters are pretty much one dimensional, but Clary irritates me beyond all measure, she’s a huge barrier to me enjoying these books because she sometimes makes me root for the enemy – or at least for some damn consequences for her endless ridiculous actions.

I have to cover 3 more irritants before I sign off on this rant:

Irritant 1: So far this series feels like a Trilogy – with an add-on. I don’t know where the 4th book is going. It had a big-bad that in their canon should have been UBER BAD, but was very anti-climatic. It was dominate by teenaged angst, often quite unnecessarily. It dragged, there was no real plot until past half-way in the books. It feels like the series ended and then the corpse was raised from the dead by a deluded Frankenstein and it’s now shambling around desperately seeking a plot or purpose.

Irritant 2: related to the above – there’s a lot of unnecessary teenaged angst all over the place that feels grossly unnecessary. Aside from Clary & Jace’s angst-ridden relationship, there’s Alec and Magnus and Simon & Clary and Simon & Izzy and Simon & Maia and Maia & Jordan. Honestly, they spend pages and pages whittering about this while big things like a family member dying or being in a coma is passed over with precious little hand wringing.

Irritant 3: Many moments where homosexuality is mentioned and makes me cringe. The use of a “coming out to your parents” pamphlet to suggest Simon tell his mother he’s a vampire (gods, no. They’re actually sat there reading aloud passages and exchanging “gay” for “vampire”).

There is a gay couple in the books, Alec (an 18 year old Shadowhunter) and Magnus, an 800 year old Warlock. And many things annoy me greatly. Alec pines after the straight Jace (because us gays are always drooling after the straighties, y’know) and as such is Jace’s devoted toy. As an added bonus, despite being older than both Jace and Izzy, he’s killed less demons – he’s too busy “protecting” his precious ones. Magnus and Alec have a relationship (despite Alec’s ongoing Jace pining) and, despite being the no. 1 warlock and very important person in the area, he ends up becoming the gang’s go-to magical fix it guy (something he’s normally paid copious amounts for. A magical GBF who can save you money! Bonus!)

Clary magically identifies the closeted Alec as gay within… 3 hours? Yeah about 3 hours of meeting him. She then decides to attack him using his closeted status and infatuation with Jace as a weapon in one of the most heterosexist diatribes I’ve seen for a looong time. And, Shadowhunter society is apparently grossly homophobic. Ish. See Alec is terrified of coming out because of it – and his sister, Izzy says to Clary that no-one can ever know because it’s soo soo bad. Until the third book, at the end of which everyone thinks they’re going to die so Alec grabbed Magnus and kisses him. *gasp* And all that homophobia disappears no longer useful for 3 books worth Alec-loving-Jace-and-competing-with-precious-Clary angst, it’s just dropped. It’s one thing to build a homophobic society, but to drop it when it’s not longer useful for gay-closet-angst plot device? Yes, this is not my impressed face.

Adding in Jace taunting Alec to kiss him and drawing parallels with him hiding his relationship and Alec being closeted (no, you clueless straight person, not the same!) and we have to end at Magnus and Alec’s relationship. While it’s nice to some acknowledgement of the huge age gap in the genre, Alec being pouty, whiny, passive aggressive, temper-tantrumy and childlike next to Magnus’ paternal, parental, scolding blah blah has been so DONE in so many portrayals of same-sex relationship that I an so very sick of it.

Ok, now I have to say again, after my looong rant – these books are worth a read. The story IS good. And I know I’ve ranted a lot but I have to return to that – the story is fascinating – I may have hated so much in these books but I never considered stopping reading them. I was irritated by them, but never bored and I never reached a point (except maybe the 4th book) were I didn’t want to turn the page or pick up the next book. Nor, did the plot or world-setting every feel unbelievable (except in a “how can Clary be that stupid?” way). It held together well and it was original in a way that very little is in this genre.

It’s a shame you have to tolerate some things to get to that gold.