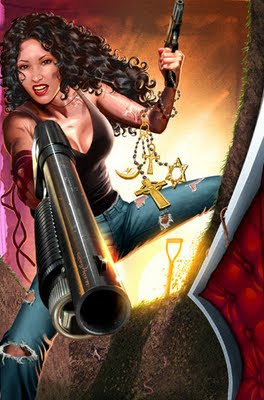 It occurs to me that I’m rapidly approaching the point where I should be looking to buy the next Anita Blake book. Gods why I do this to myself I will never know, I think the only defence is that they’ve now become so utterly bad that they’re almost comic

To extract every ounce of amusement and hopefully set myself up for a pleasant surprise, I have gazed into my crystal ball to predict the plot of this next worthy novel

The scene opens with Anita having sex. I’ll say on the kitchen table, not done that yet and gods forbid we miss a cliche. The sex will probably be portrayed as kinky but be more vanilla than an ice-cream van. For more detail I predict:

Evil bad guys!: Oh, we’ll get back to you when you’ve finished

plot: Excuse me? Can I get a word in edgeways? Please?

Micah: I have no personality at all. Still, despite being in many books now. Let me insert a random tragic story since it’s easier than actual characterisation. Oh and I have a really big cock.

Evil bad guys!: Is it our turn yet?

Richard: RAWR! I hate everyone, including myself! So I am going to do something Completely Fucking Stupid. Again. Isn’t this like the 6th time now?

Evil bad guys!: *sigh* look, we’ll be over there talking to the plot, it looks kinda lonely. Call me when you’re done

Asher: Pain pain woe, angst, no-one finds me shaggable anymore except Anita and Jean Claude and Narcisuss and absolutely everyone who sees me. Woe.

Mother of all darkness: I AM SCARY!

Anita: Nooo! I am scared! I must have sex to chase it away! HUMPA HUMPA HUMP HUMP

Evil Bad Guy: Ready for us yet?

Richard: RAWR i still hate you all. Let’s do something else REALLY FUCKING STUPID

Evil Bad Guy: look, we’re kind of on the clock here, do you mind paying attention to the antagonists for 5 minutes?

Jason: Let me read aloud from some trite advice column and be called wise. Now have sex with Anita

Anita: HUMPA HUMPA HUMPA wow Jason you’re totally right! But I will return to angsting about my ex-fiance in college now even though any reasonable adult would have GOT THE FUCK OVER IT by now. HUMPA HUMPA HUMP HUMP

New guy: Hi, I’m here to have sex with Anita. Don’t remember my name, it’s not like it matters or I‘ll be even remotely memorable.

Requiem, Byron, London: There’s a new guy to have sex with Anita - we will now demand that she be our twu love forever, because, even though we have spent CENTURIES having sex with everything that moved, we’re still incapable of having sex without her undying romantic love. Woe!

Bad guys: That’s it. We’re here and we’re going to kill you! No more delays, this book has to end at SOME point!

Anita: HUMPA… BAD guys! how will we succeed?!

Richard: I don’t care! Because I’m angry and have issues! I’m going to do something completely fucking stupid!

Jean Claude: *sigh* *tries to fix yet another stupid thing*

Anita: We’re in the middle of something here *PING* *Spawns new super power* There bad guys you have been beaten HUMPA HUMPA

Evil Bad Guys: What the hell? That’s it? Heyyy! You could have at least waited until we left the room!
Posted by Renee at 8:25 AM