The Vampire Diaries is Over For the Season, and Really, Who Cares? 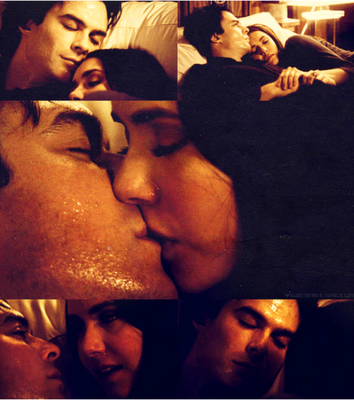 Okay, I guess it shows how important The Vampire Diaries is to me, because I am only now just getting around to commenting on it. Season finales are supposed to leave you wanting more, and to me this one just fell completely flat.  Last year watching Damon and Katherine kiss was far more interesting. In fact, watching that kiss had me wanting to push Nina out of the way and pucker up with Ian.

I don’t really care that Stefan is off on another blood binge.  Booo hooo. In fact, only good can come from this because he is far more interesting drunk on blood than when he is not. Can we please stop with the molting, moldy, depressing vampires. I also hope that during the break, Paul Wesley will take some acting classes.  Yes I said it.  The only thing he has managed to master is that serious glare, that is supposed to make the viewer weak in the knees, but inspires giggles from me.

When Jenna died in the last episode, I had honestly hoped that they would have found a reason to get rid of Jeremy as well.  I got my hopes up when founderella (sheriff) shot him, only to enter a land of grave disappointment when Bonnie brought him back.  Once again, the magical negro saves the day.  Heaven forbid they give her any culture, or anything to do but sacrifice herself for White people.Speaking of White people, Gone with the fucking Wind..um really.  No, seriously, really?  In a town that celebrated the antebellum south to point of having seriously creepy founders day celebrations, I shouldn’t be surprised, but I am sick to death of them acting like this is a glorious period in history that we should all be celebrating.

Also, the angst between Damon and Elena is over done.  Yes, I know, unrequited love and how this is supposed to make this story complicated, except that in the real world people move on and have lives.  How long is he going to be pinning over her and why is he pinning over her to begin with?  She is a 17 year old girl, who constantly makes terrible decisions, is selfish and expects the world to revolve around her.  I will admit that she is not the most awful female protagonist in the urban fantasy genre, but she is a damn close second.

I won’t spend anytime anticipating the third season though  I know I will watch it, because I have to watch something while True Blood is on hiatus, but all it will do is remind of all the ways it is a teen angst vampire show, that cannot hold a candle to True Blood.  The characters have no depth, several of them are in fact unnecessary and as I have mentioned earlier, the acting sucks.  I suppose the nicest thing I can say about The Vampire Diaries season finale is that it fell about as short as I expected.
Posted by Renee at 12:49 AM