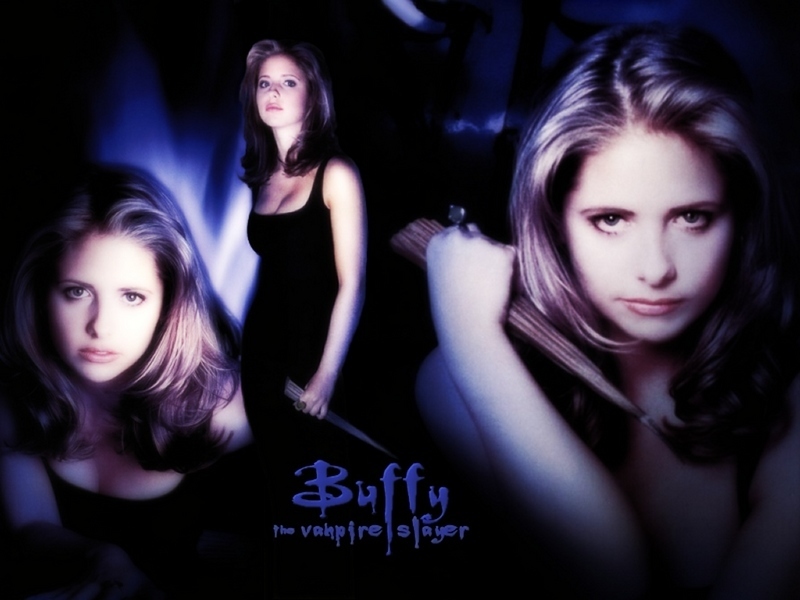 The good girl/bad girl binary that was a theme for much of the season and it was highly anti-woman.  Though both Buffy and Faith are both White women, Buffy the blonde (the typical manifestation of the girl next door) was cast as good to Faith’s darker bad. We also had two different Willows.  The Willow from the second dimension was a power hungry, sadistic vampire, who was brimming with self confidence. It would seem that to be respected, liked or even loved, a woman dare not step out of the sickeningly sweet good girl paradigm. When Oz and Cassandra found Xander and Willow kissing, Willow’s solution was to offer Oz her virginity. This of course was to prove her true love for him for daring to sexually experiment.
I will however acknowledge that Whedon tried to infuse the show with some interesting themes.  In the Gingerbread episode, Joyce organizes a vigilante group to deal with the vampires and other supernatural episodes.  This reminded me very much of the way that hysteria causes people to act in unreasonable ways, and this is especially true when a mob mentality takes over. Once again however, it is Buffy and Willow who are signaled out for attention by the group. I suppose the viewer was to take away that this was  unreasonable, but this episode played out against the theme of good girls vs bad girls that ran throughout the season. It is further troubling when you consider that women have been massacred for performing magic.  These massacres enriched the Catholic church, as well as enshrined the secondary status of women.  The attack against women was portrayed as stemming from an outside source, whereas; historically the true reason is misogyny. I truly believe that Whedon dropped the ball here.

In the episode Band Candy, adults act like teenagers after being poisoned by eating chocolate.  What is interesting about this is that this is the first time we get to see a personal side of Joyce.  We know that Joyce has a job at a museum, but beyond that we know nothing of her likes, dislikes or passions.  It took a regression for her to be sexual and passionate, because apparently that is not what mothers do.  Joyce is constantly framed as the self sacrificing mother and this of course is once again sexist.  A loving mother will always care about their children and seek what is in their best interest, but to become a martyr on behalf of their children’s needs and wants comes directly from patriarchy.  Your identity changes when you become a parent, but it is only women who are expected to loose themselves entirely.

In the episode Earshot we learn that Joyce and Gilles slept together twice on top of a car. Joyce expresses shame by avoiding making eye contact with Buffy.  The slut shaming of women for being sexual is hardly original.  Buffy herself must refrain from sexual activity with Angel, because it would cause him to lose his soul, and despite the fact that giving up sex comes at a huge cost, she is more than willing to make this sacrifice.  Repeatedly Whedon infused this season with the idea of female chastity as paramount to being considered one of the good girls, and since we know that bad girls end up dead, the alternative is hardly appealing.

Thus far I am not impressed with Buffy the Vampire Slayer.  In three season there is only one out gay character, and his coming out is played for comic relief.  The Black slayer had a fake accent and was quickly dispatched.  The Black evil vampire quickly met his end at the hand of Faith, once again suggesting that people of colour exist to be supplanted by Whiteness.  The characters have yet to develop, and Buffy  continues to be a self absorbed irritating twit. So far each season has improved, but that is not saying much when there has yet to be a good season.
Posted by Renee at 10:40 AM