In The Battle of the Werewolves Alcide Wins 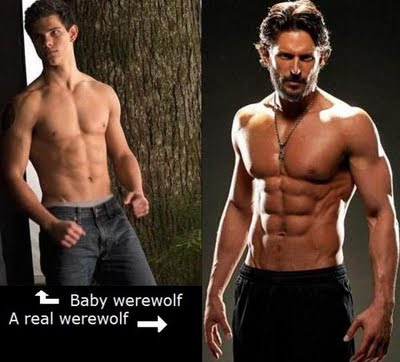 Umm yeah, you all know that I am right on this one.
Posted by Renee at 11:28 AM 0 comments

Hexed is the second book in the Iron Druid Chronicles by Kevin Hearne.  If you are interested, you can check out my thoughts on Hounded, the first book here. Let me start by saying that just like Hounded, you should probably buy two copies of Hexed, one for you and another to give to your friends.  Hearne has proven that he is an excellent storyteller and someone to most definitely keep your eye on.
As with Hounded, Hexed is extremely heterosexist and able body centric. The erasure is absolutely complete; however, unlike other books in this genre, there is no homophobic or disableist language.  The characters are again largely White, though the Native American trickster Coyote and an Indian witch do make a very interesting appearance. I must admit that I was worried when Coyote made his appearance, because he is known to be a trickster, and few writers have the talent to pull off a decent portrayal, but Hearne hits it out of the ballpark, as well as making great reference to the near genocide of First Nations people, thus making the book political as well. This was not simply inclusion for the sake of cookies, but inclusion meant specifically to challenge racial privilege. As we have discussed many times on the podcast, quite often characters of colour are included in the urban fantasy genre, they are devoid of cultural markers, or are written based in stereotypes, thus making them cardboard cutouts when juxtaposed to either the protagonists, or other characters in the story.

Fangs for the Fantasy Podcast - Episode 19

So I’ve finished Anya Bast book 4 and with it the entire series (it felt like an ending, I don’t think she could write a book in the same series though I know she’s written others)

And there was LESS sex. Still a lot of sex, but less. I was actually glad of this, I’ve always said that Anya Bast actually has a great world and a great story if she’d only cut down on all the excessive shagging. But without the endless shagging other annoyances became apparent -  the tropes were annoying – big strong man must tell you what to do to protect you, oh delicate petal of womanhood. But there’s some other stuff that bugs me, worst of all – the plot doesn’t work.

I thought book 3 was bad, with them deciding that the best way to keep Claire safe was to take her on a road trip to avoid the teleporting demons who can travel anywhere in the world in a second rather than using the coven’s overwhelming numbers, magic and copper weapons. But book 4? Ugh.

For reasons unknown our fire witch Sarafina gets a “feeling” that something important is somewhere and goes wandering and *gasp* so there is! Can there be a weaker, more pathetic way to move the plot forward than to have the character do random crap because “they got a feeling”? NB in no way shape or form are fire witches psychic… so why? How?