Doctor Who, Season 10, Episode 0: The Return of Doctor Mysterio

Sorry that we're a little late getting to this folks.  With the holidays being so busy, I simply didn't have the time until now.  We're all still up for a conversation about Doctor Who right?  I mean, it's Doctor Who after all, or at least that's what it was supposed to be when I tuned in.  I don't know about you but it's been so long since we've had a new episode of Doctor Who, the withdrawal pains have just been gut wrenching. Sure, I spent quite a bit of time re watching my favourite episodes like Vincent and the Doctor (hush, I know it's a Matt Smith episode, but it's still good) to try and deal with the empty place that should have been filled with adventure, a sonic screwdriver, a tardis and perhaps the harsh shrill of the word, "exterminate", being yelled by a Dalek.

I didn't even whine when we were informed by the BBC that the Doctor's new companion wouldn't make an appearance this episode and would instead be introduced when  Doctor Who returned in 2017. I didn't even whine when I learned that the Christmas episode would take place in New York of all places and I have good reason. Everyone remember the Eighth Doctor's movie? Yeah I know, it's not fit to bring up in polite company. At any rate, American ideas and Doctor Who don't work. All I wanted was a new episode of Doctor Who.  What I got however is not something I recognize as Doctor Who.

For quite some time now we've seen the rise of the super hero genre.  I cannot say that it's a genre that I'm particularly in love with. I haven't read any of the comics and so don't get drawn into the hype when a new one is released. I will admit to watching Luke Cage, Jessica Jones and parts of Daredevil but none of it has been enough to really turn me onto this genre.  What I didn't expect was to turn to the BBC on Christmas night, and end up watching a superhero episode, instead of my beloved Doctor.  Look, I get that superheros are the thing right now but they have no place in Doctor Who. The two go together like a square peg and a round hole. It does not compute.  Did the cybermen convince Moffat that he would be deleted if he didn't suck all of the British humour out of Doctor Who?

Yes okay, the Doctor was responsible for Grant becoming a superhero and it did come with the awkwardness of Grant having x ray vision during puberty but none of it was really compelling, or in fact worthy of being a Christmas special.  Last year, the Doctor met Santa, and this year it's as though the writers decided to say fuck you to Christmas altogether.  Sure, one can maybe try and brush it off with the fact that the Doctor isn't a fan of Christmas and has only stayed for dinner once but that doesn't mean he shouldn't get into some form of holiday hi-jinks. To be clear, there was no Christmas in this Christmas special. What they gave us instead was the reintroduction of Nardole - a reminder of his last long night with River Song, and the Doctor's continuing sadness over the loss of Clara. Rather than travel alone, it seems that the Doctor dug up Nardole, played by Matt Lucas, who as it turns out became the only thing I enjoyed about the episode.
Read more »
Posted by Renee at 12:00 PM


Well after the festive period we have begun to sober up...


We're now going on less festive but still very drunken holidays to foreign parts with lots of sun and booze and food and booze and new sites and booze.

And for all of you in very cold (Canadian), frozen (Canadian), wintry places (Canada), think of me when I'm basking in the sunshine 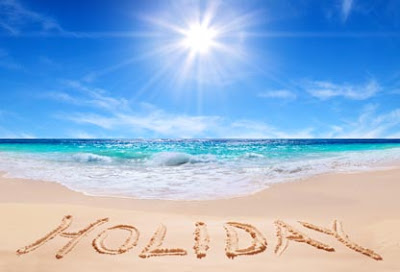