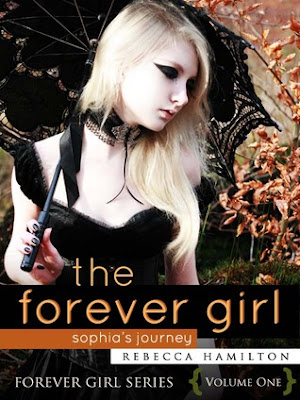 Sophia is trying to make her small town life work – though she’s not exactly enamoured with it. Unfortunately, being a wiccan in a town with a rather… inflexible church is not very fun. When your mother is a member of said church it’s many times less than fun. And that’s before you consider the daily grind of living with her curse.

Still, life was working, until she suddenly finds herself introduced very abruptly to a whole new world. A world of elementals and vampires and shapeshifters, each with their own agendas. And at least some of those agendas seem to involve her, whether she wants to be involved or not.

Of course, one agenda she certainly wants to be part of is Charles, the intriguing and extremely good looking shape shifter who has his own secrets. Keeping safe, finding a balance with Charles and dealing with their own issues with each other are more than enough to keep anyone busy, but there are others who are also watching – and have their own designs for Sophia and Charles.

They find themselves dragged into a centuries old obsession and, worse, into the very depths of supernatural politics - and war.

What I love most about this book is the world. The idea that supernatural beings are different elementals, the concept of the universe and how each elemental has its own gifts and was intended to correct the problems of the previous elemental is fascinating. I actually wish it was more explored, especially since I think Sophia has the opportunity to ask a lot more questions than she did. I love this world. I’d really pick up the next book simply because of this world, it’s more than enough reason to keep me reading and keep me hooked to the series.

I’m also quite interested in how the magic system and ritual are performed. It’s structured, but free-form, like it has loose rules but not strict boundaries and allows a lot for personal touches and interpretation. It’s something else I’d definitely like to see more of.

The plot was also interesting in its way, and yes I’m slightly more guarded here. I think this book has 3 stories that gradually meld one into another. To begin with we have the story of Sophia living in the world which isn’t very friendly, discovering the supernatural, beginning to understand the supernatural and slowly adapting to the supernatural and even beginning to realise that she, herself, has a place in the supernatural world. It’s not a rapid discovery, even with the plunge into the deep end introduction, she then gradually finds her feet. In some ways I find this very refreshing, far too often in urban Fantasy does a protagonist discover the supernatural and then decide she’s going to leap in with both feet to SOLVE THE MYSTERTY! Even though, realistically, she knows absolutely nothing about what she’s doing. Sometimes it’s done well. Sometimes not. Here we have more of a slow exploration – with reservations, certainly, but not so much running and screaming. Perhaps she’s more reticent than I’d like but otherwise I like it.


This morphs into a love story which, again, I actually quite like. Now romance will rarely be my favourite part of any book and there were elements I didn’t care for, firstly, I think she as unnecessarily antagonistic towards Charles early on. I think we had a stab at the “I hate him but now I love him” trope but the author realised it was silly and stopped before it went too far. Secondly, there was the issue of Charles’ immortality. Yes, of course this is an important issue and should have spent some time considering (maybe eventually) but putting a break on the relationship even beginning unless Charles is willing to sacrifice his immortality (and risk his life seeking the creatures that could do it) made me boggle – it was too soon to even remotely demand that kind of epic sacrifice from him. It was especially stark because other than that the pacing of the romance was good, especially in Urban Fantasy were too many heroines see their loved one and are suddenly in TWU LUB FOREVER before even exchanging a line of dialogue. It was refreshing to see a relationship develop rather than suddenly pop into existence fully formed.

This, in turn, turned into a great action sequence. Now it was abrupt and I’m still not entirely sure of the sudden leap, but the story itself worked extremely well, introduced us to far more of the world, to Sophia’s capabilities as well as the capabilities of some of the other elementals. It was tense, exciting, interesting and showed so much more of the world, its politics and set the scene and the pieces for the next books and the series itself. The fight scenes were a little off when there were crowds since I was left with the sense of the bad guys queuing up for their turn in old Bat Man fashion, but the smaller scenes were well described and flowed nicely

Ok the elephant in the room I can’t ignore. There is a lesbian in this book who plays a very large role. It’s difficult to describe why I was not pleased without spoiling so I’m going to have to try very hard to tip-toe round this, I can’t even reveal which character that is without spoiling the story – and the story is worth reading so I don’t want to do it, so I’m going to have to refer to her as “the lesbian.” This lesbian watched her lover killed by religious bigots, then spends centuries serving and protecting her lover’s mortal descendants (well the women) and killing the odd husband. In the present day, she manipulated the currant descendant’s life to try and bring them together, tries to kill her boyfriend, betrays her and terrorises her into coming to the lesbian’s arms. Then the lesbian has all her memories of her true love, the memories she has had for centuries erased; her memories destroyed.

So she’s a persecuted lesbian from a disastrous love affair that ends in death, who exists to serve straight generations, kills men who compete with her unrequited, unknowing straight love interest over centuries and she then manipulates them cruelly. To finally end up with her entire love erased. Yeaaah, this was not ideal.

We do have some treatment of mental illness that is rocky. For a long time Sophia considers herself mentally ill before she realises it’s her special magic (and how many times have we seen that before). We do actually see her mother, however, suffering bipolar disorder. But most of the time we see this as how much of a burden and pain this is for Sophia and how much it hurts her.  But we do have acknowledgement that it is her mother who is suffering and who needs help and support.

We have some interesting insight into religious prejudice, especially the malicious notes that plague Sophia, while at the same time consciously stating that the prejudice is limited to one rather extreme church rather than being universal.

On race, we have Lauren who is half-Asian, but she doesn’t play a particularly heavy role in the book, though she does hint at some interesting ideas on cultural disconnect and reconnecting with her heritage.

Sophia as a character is someone I’m relatively neutral on. She’s not a push over or a weakling and she doesn’t make poor decisions in a Spunky sense, though not all her decisions are brilliant. She’s a trifle over concerned with people’s opinions, but not ridiculous so. She lives her own life, but has streaks of neediness and dependence that are, probably, not unrealistic given her upbringing and experiences. I wouldn’t say she’s an amazing character, but she is a very real character, she’s a person and none of her features were unduly vexing, ridiculous or otherwise unpleasant.

All in all, I liked this book, it was fun but more it was fascinating. And that, more than anything, means I very much want to read more.